How to create a Rocky Fire Golem (to later animate)? 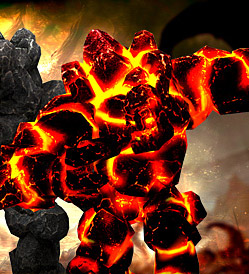 This is the second week using Blender, the will to do more is constant, attempting to create a rocky fire golem type creature to late animate the resembles the surface effect

I have hit 2 issues that are leaving me baffled. The first is regarding looks. I would like the creature to resemble lava rocks, similar to the image “fire golem” but at the point I am on modelling (Screen Shot), I can´t figure out what the best approach for creating the space between rocks would be.

My second issue is how to model this creature for animating so that the rocks themselves don’t deform when he moves. In other words, should the character be a “stone by stone” parenting structure (if that is even possible) or could the body be one object and have some sort of limiter only deform spaces in-between the stones defined on the surface?

Any suggestions, tips or pointers to tutorials are welcome.

I can’t speak for an actual production team.

But I would start with one mesh.
Model as much as you can, (to a reasonable extent).
You don’t need to model every crack, and between every rock.
Some loops will help but your better off sculpting in those areas.

Take a good look at sculpting.
This is where you’ll want all those crack details, and molten texture.

(At this point you could make a new mesh, and based on what you’ve done so far decide if you want to split it into pieces.)
Which mesh you use, new or old, make some UV’s.

Then you get into rigging.
And that will depend on the mesh you decided to stick with.

You can change your weight painting to make it rigid.
You could even make a parent relationship system if you wanted to.
Instead of using the armature deformer you can parent to bones.

If you wanted other effects like dripping fluid, or colliding rocks,
Look into the physics tab.
But I can’t help you there.

Hope that gives you some insight…

Use particles and and make a group of lava stones.

Model a basic shape and then switch to sculpting, sculpt in the shapes of the individual rocks, the “facial” features and the larger cracks.

Retopologize the mesh and use normal and bump maps for the smaller shapes and to give the rocky features a “rough” look.Use multiple textures on the mesh for the rocky parts and the lava, make sure to assign a material index number to the lava parts for compositing.

Created more edge loops and beveled where joints and rock separations (for joints and to show lava), also corrected some topology manually. You’ll most definitely want to sculpt this and retopo a mesh. Trying to model this with poly-modelling as suggested won’t give you the results you want. Start by sculpting the character, don’t worry about it looking clean or well defined. Just make sure the shapes, crevices and cracks are all there. Then use something like RetopoFlow to surface the sculpt.

I decided to slice up the current model in pieces to try the single object since multiple piece approach, at least on the texturing side of things it should be easier. Not sure the “floating in mid air” burning rocks look good. I wonder if there´s some sort of “force field” method I could implement later on?