How to export game for Mac? (.app)

Hello, I can successfully export my game as an .exe file for Windows, but how can I export this as an .app file for Mac? (I am using a Windows PC). Thanks.

Yes you can. But not currently anymore?

I’m not sure if this is just a me issue, but even after enabling the add-on in UPBGE 0.3+, it doesn’t appear to me in the UI.

I am using UPBGE 0.30.0, on which I cannot see the Game Engine Publishing add-on in the preferences. Do I have to download this separately? Thanks.

It might have been removed in early UPBGE 0.3x versions but replaced in later versions. I’d suggest upgrading to one of the experimental 0.3x builds which are based on latest Blender source, which in this case is Blender 3.2. It’s what I was using for the screenshot of the add-on.

I just downloaded the latest UPBGE from their website (0.3+ - 4 December 2021) and could not find the add-on here either. Any ideas? 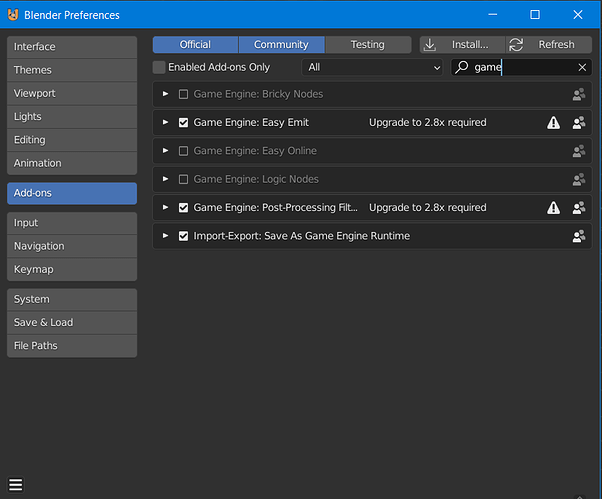 That is odd… you can download the add-on here:

Place it in the folder:

Then install the script as an add-on via the User Preferences editor, add-ons tab.

I’m not sure if this is just a me issue, but even after enabling the add-on in UPBGE 0.3+, it doesn’t appear to me in the UI.

Turns out I’m in the same boat. Any alternatives you could suggest?

Unfortunately not that I know of. UPBGE 0.3+ is fairly new and still missing a lot of its old functionality.

You could “technically” run the add-on script in the text-editor, but you’d need to setup/run a lot of functions and arguments.

UPBGE 0.25b’s game publishing add-on is still working if you want to give that a try.

Probably going to get a shouted at for mentioning this by some fanatics, but Armory3D supports all platforms, Desktop, Mobile, Web, Console, etc. All conveniently able to be exported from a Desktop computer, for example your Windows to Mac dilemma.

I see. Thanks anyways.