How to fill a cup and animate it after with Fluid Systems.

I’m working on a animation that should be something similar to a shot i have seen in the apple watch creation videos. You can check the part here: ( The part is at 4:29 / 4:43 )

I need some help with the right settings for an animation that has similar fluidness like in the apple creation trailer.

The thing i actually want is a cup that is filled already ( so the fluid is already set and has little to no motion ) and the cup with the fluid slowly turns after that.

What i did is put a cylindrical shape that acts as the inflow object inside the animated rotating cup. The fluid is pretty rough ( i don’t mean the resolution ). I first want the right animation before i increase the resolution too far. At this moment it’s sticky. I have the no slip setting on the objects, but it seems to stick to the cup and does not let it flow naturally. Does anybody have some ideas??

Here are 2 images of the viewports in blender so far. 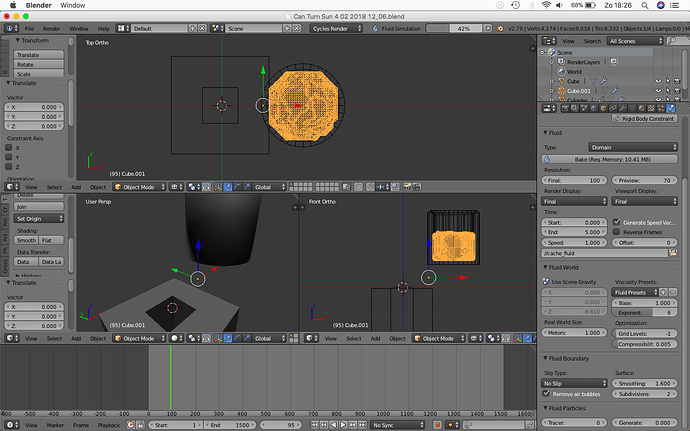 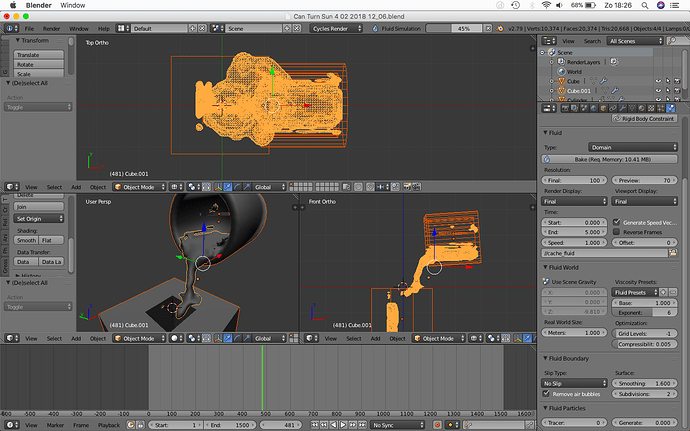 I uploaded the blender file to wetransfer. you can download it here…

Upload it to blendswap, I went to that site and it wanted me to start clicking on agreements and other garbage. Also I don’t have a clear idea of what is wrong with your existing simulation. Write down slowly and clearly (editing your post for typos) the effect you hope to achieve and what the current problems are.

Upload it to blendswap, I went to that site and it wanted me to start clicking on agreements and other garbage. Also I don’t have a clear idea of what is wrong with your existing simulation. Write down slowly and clearly (editing your post for typos) the effect you hope to achieve and what the current problems are.

Hi, i have an account on blendswap, but as far as i know it is to share blender scene’s that are done. Not work in progress files. And wetransfer is the most used file transfering system in the world, so i don’t think that should be a problem. The problems with my scene are stated in my post.

I am trying to recreate a scene from a production film. My fluid needs to be as smooth as in that piece of film and the biggest problem is that the fluid is sticking to the moving can. The can should have no fluid inside it, because it is turned. What happens now is that alot of fluid particles just stick to the sides. If i can fix that, that would be a big step forward…

I meant to say pasteall.org oops. I’m away from computer for a bit but but I’ll have a look.

Dude, its 400mb – zipped! I don’t even think I could open it. I don’t need the cache, get it down to size somehow and post only the blend to pasteall.org. There may be people who will download a random zip file, I won’t.

One thing you can try is to scale everything up in your scene, and apply the scales. If the sizes of fluid are too small they act more like a drop of water (clinging to itself) rather than a waterfall.

I thought helping out other people should be fun

You don’t have to judge me for me reducing the render time for people that don’t have a killer pc that renders it in a few minutes and 400mb is not that big in most country’s with fast internet connections. I will try the scaling, thank you

Helping out other people is fun. Especially when it is possible to others to help people. Photox is not judging you. It is just timewaste to up and download a 400 MB scene with a lowres fluid sim on a website that forces people to “start clicking on agreements and other garbage”. It is much more productive to upload this file without your sim cache to a place where people who try to help can download it without any “garbage”. Photox can easily recache your sim and analyse that scene… If he is willing to analyze your scene anymore. I`m sure he is. I mean he does and he spends his time for you to analyze your problem with that scene.