How To - Font Image File

Like the title says, I need to take a .ttf - TrueType Font - file and make an image out of it for the game engine to use a texture for real time text. How do I do this? I googled it and FTBlender doesnt work on the newer versions of blender and i dont have a computer i can install an older version on at the moment. How to I get a file that I can use to map for interactive/real time text in the BGE? Any help is appreciated!

EDIT: ALSO! I need it for GLSL! It would really help. I am working on a project that could bring a lot of attention to Blender and the Blender Community if I can succeed so any help is greatly appreciated!

You clearly influence the world. Good luck with your project!
Hope this helps http://www.pasteall.org/blend/28485

Edit: almost forgot: in Game Settings on Material tab check Text.
Use texture as a template for your own font in image editor.

Close but it needs to be realtime and change-able. So if I lower a property in game, the text changes. Your example would have to change the UV map for every square. Thanks though! Still need to find a realtime text for glsl…

Forgive my ineptness but how to you do that for the orange ones? The ones that arent inverted so its just the text not the cutout text in the squares like the live one you did on the purple? Thanks for all the help.

EDIT: Neverming I got it. Thanks! youve been a big help. They are oddly spaced though, the letters that is.

OTHER EDIT: I added the picture. Why is the new one I did spaced so funny? I resized the map to fit the @ symol 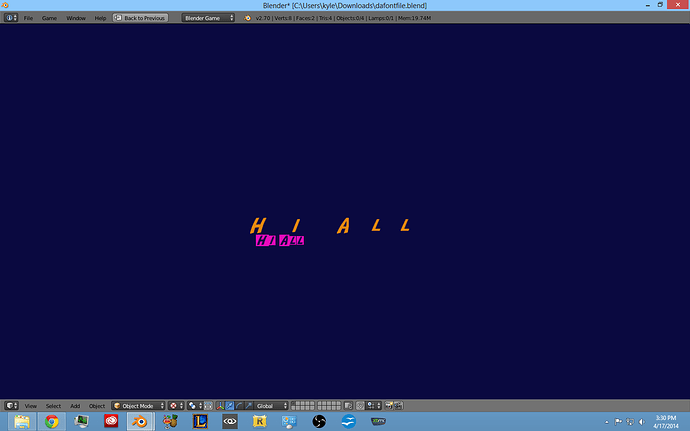 It could be something with scale not applied. No idea without .blend

Could you do me a favor? I’m away from my computer so could you just take your blend file and do what i’m trying to do for me? I know it isnt very professional and what not but could you? just make the orange text do what the Pink text is doing? If you do, Thanks a million!! If not I understand.

EDIT: Yes, re-reading that it does sound lazy and i feel a little guilty, but no matter, could you do it?