I’ve got an idea for a character having a dream sequence … or a way of illustrating their thoughts /images.

So I mapped a couple of .avi’s to planes / boxes, but I don’t want the geometry to show, just the movies “floating in space” … or maybe … even better if I can decide on some kind of cloud/bubble … not sure what, but would like it to blend more or less with the background.

But for now I just want to hide the underlying geometry.

I tried setting the alpha of the materail to 0.0, but “of course” ?? (textures /materials I know not much of yet

… the texture/image doesn’t show up then.

Do you have ZTransp set?

First, I’m honored u asked me. But I’m confused since I know you know what you are doing…but Animated Textures is what you need. Start with a simple pic as an image texture on a plane. If you use a circle, be sure to create {F}aces first.Create the default material and leave it alone (alpha 1.00). Create a texture for it as an Image type, and load image. render and observe pic as the mat for the object. Then explore the clip button on the image tex button to load up a movie or image sequence.

With planes, no geometry shows because, well, there isn’t any; it’s just a surface. With cubes or other objects, you have to unwrap the object and map the pic to its faces, a bit more complicated but don all the time, especially with heads.

I would model the text for the thoughts as text objects in Blender and have them wiz in and out. Use blue for sad, red for angry, yellow for happy thoughts, green for envy, etc. Think happy thoughts. I like that. Anyway, you’ll have to film your model (the person doing the thinking) in front of a blue screen so you can alpha it out as per Hoehrer’s blue screen thread.Map that onto a plane sitting front stage left, the idea pics upper stage right (maybe some bubbles floating up out of her head up to the image would be cute). Text would zing in and out, bouncing off the idea bubble, or emerging from it.

I just did the above and it works well for me. A faced circle of my daughter thinking Happy Thoughts in curlz font. cute. Backing up, you need to storyboard the thing. Take a piece of paper, divide it up into 16 squares, and sketch the visual idea as 16 segments, and you have a rough project timeline.

Now, about the fading into the background part. If you have, for example, a head shot of a model wearing red sweater mapped to a bubble plane against a blue background, where the bubble cuts off you’ll have a hard edge. You’ll need an alpha mask for the bubble, white in the middle fading to black at the edges for that. You can use the UV/Image editor texture painter for that, or Gimp/whatever. Layer that tex image on the mat but have it affect Alpha, not Col. Then, that red will fade away toward the edges and the blue will start to show thru.

I’m not sure if the effects you want are something like below .
if it is then you want z-transparency on and you alpha set above 0.0 (that makes it invisable) .
I think I set it below 0.5 for the first one (by the way my first render and model - I love using the alpha channel) and set it to 0.35 for the plane (just a test render i just did) .
And you probably want to stick with a plane . That would be the simplest solution beacuse it has minimal geometry . Also if you enabled an alpha channel in your AVI around the edges using something like Adobe AfterEffects that would also add to the “dream-like” effect .
Actually I think you could get the above edge effect using Nodes but I haven’t used them much . geneome » Blender Tutorials has a series of vidtuts showing you how to use Nodes which you might find useful . 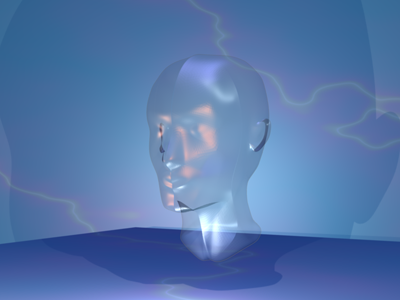 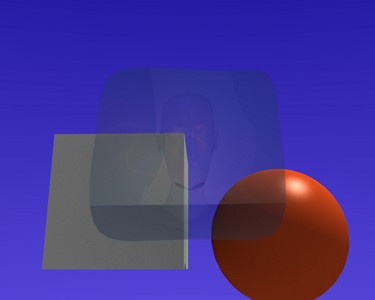 Thanks for all the ideas guys, I’ll experiment with them all !

I just posted this in another place earlier today. For some reason no matter what machine I’ve used Bllender on, alpha’s in image textures only work for me when I enable “RayTrans” first and then enable “Z-Trans” which in turn disables raytrans. I do not know why, but this solves the problem every time for me. I work from 3 different machines, a Compac with an intel celeron, an e-machines with an AMD athlon xp 3000+, and now my new baby, an acer aspire with an AMD turion 64X2 TL50. I still can’t believe I got this smokin’ little machine from walmart. Same problem on all machines, same solution too.

Mike: been playing around still with your concept. I think shaded alpha’s are key also in overlaying the video. Use a grayscale image as the Alpha input to a Set Alpha node; this will create an alpha channel for your "girl thinking.

Overall composition and transition to thought is important. Think Picture of girl on street. As she gets her thought, you want to blur the background as the thought pops into her head. Render a sphere to get a Z-mask image, so you can feed the Z to a blur; see wiki on Blurring background of Flat images (added a few days ago). This will allow you to keep her in focus, and blur out the distracting background.

At the same time fold in an alpha mask that kills the alpha at the baloon spot. Use the image output of a black hovering sphere over a white background to a Set Alpha to get a mask where Alpha is 1 except fading to 0 where you want the bubble. Feed the idea picture there (may have to use Translate to shift it into place) with an AlphaOver. That way, the idea will overlay and fade into focus (see onion skin / Xray technique writeup in wiki under AlphaOver node).

Also, make sure you film actor ‘getting the idea’ by pausing and looking up (at where the bubble will be). Using the alpha gray-scale mask will hide geometry as I think you were envisioning it, because one image will meld into the other.