How to keep foot IK bone connected to leg?

Hi,
I have a simple armature for a leg with one bone to drive the IK. I wanted to make it so the bone in green cannot disconnect from the rest of the chain. The leg IK won’t work if I leave the green bone connected to the previous bone as its parent, and I haven’t had any luck with bone constraints as they all give similarly weird behavior.
Is there a way to have this IK setup working while having that driving bone connected in some way so I don’t have to worry about the bone distance when animating?
Thanks 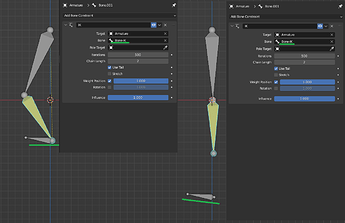 The short answer is no.

Ik targets can not be connected to the bones in the chain.
It loos like you are using the foot bone as the IK target. It would be more logical to create a new target bone (at the front of the foot) but disconnected and put the IK constraint on the foot not the lower leg. Then you can have the foot connected to the leg.

Target bones are “controllers” to move the IK chains.

I see, I was worried that was the case.
You’re right it does look that way, though I actually did mean for that to be the IK target bone. I extruded the bone from the bottom of that calf-bone, but for some reason it ended up pointing forwards like a foot in pose-mode

That’s a good idea regarding moving the IK constraint to the foot instead of the lower leg, I’ll try that out and see how it goes.
Thank you

I see, I was worried that was the case.

Don’t worry it is how it is supposed to work