I want to create a bas relief from a 3d scene in Blender. I have found one way to do it but it’s not perfect and doesn’t look quite right.
This is what “bas relief” is for anyone who doesn’t know: 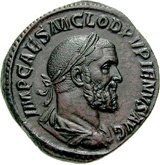 More info: the bas relief mesh is going to be exported to STL and printed with a jeweler’s 3d printer and made into a necklace. So it has to be real (polygonal) geometry, not something like normal maps. It’s not hard to think of other situations as well where you’d need a geometry instead of normalmap, such as bigger architectural bas reliefs, not coins or jewelry, so an answer should benefit more than people wanting to 3d print or mill something.

Here is the current way I do it and explanation where the issues are with this approach.

Use power-of-two resolutions for this image to save render time when used as heightmap. Use a high resolution, such as 2048x2048.
Now, add a plane and subdivide it 10 times, or any other flat mesh with many polygons. Add a Displacement modifier, and set its texture to the image you have generated. Change the Strength value until it looks good for you.

Looks pretty good, but there are two issues.

Have you tried creating an alpha of your image and then sculpting the detail using a stencil? Also your images aren’t working.

Does the mist give you something the “Z” or Depth pass does not?

Does the mist give you something the “Z” or Depth pass does not?

AFAIK the Mist pass is anti-aliased, while the Z-pass is not.

AFAIK the Mist pass is anti-aliased, while the Z-pass is not.

Thanks, I’ll look into that. I have previously used Gaussian Blur in Photoshop for that.

I have not experimented much with Blender’s decimation yet.

Meshlab’s Quadradic Edge Collapse decimation does a reasonable job. It generates larger triangles in flatter areas, so you can eliminate lots of triangles where it does not matter that much. If you are only concerned with 3D printing, having a triangulated model instead of quads probably will be OK. Comparing decimation in Blender and Meshlab might be a good idea. If Blender works equally as well, exporting the model to another app does not make much sense.

Could you use a displacement modifier? It will create real geometry.