How to model a snake head better ?

Ok so im done for i can’t get a snake head done.

As you can see i can be better.

I’m stuck at the modeling the mouth and nose.
Any Ideas what i can do and i looked at mountains of reference images.
I’m keeping this one low-Poly.

I don’t know much about snake anatomy, but the thing that looks “off” to me is the lack of a mouth. I have the impression that snake mouths extend from at or behind the eyes all the way to the snout. Some (most?) snakes can open their jaws almost to 180 degree angle.

Try googeling for “snake head” in the image section, I’m sure you can find good reference there from different angles.

Try googeling for “snake head” in the image section, I’m sure you can find good reference there from different angles.

Lol you will be surprised at how many i did look.
But after awhile of anger and being patient i got iot right…
But ran into a small topo problem.

The 8 edge loops i want to end where they are.
Like just connect with the ones next to them.
But for poly count reasons i can’t add edge loops to the faces across them.
So any way i can make the end vertices (Selected) ones connected without edge loops ?

As far as I know there are two ways to step-down from many loops to few: by adding a “diamond” - a quad whose edges are diagonal to the existing edges. Or, by adding a U-turn Quad, a trapezoid whose longest side faces the low-loop direction. It is called U-turn because of what it does to future edge loops.

The U-turn takes four loops and converts to two, while the Diamond takes three and converts to one. You are trying to go from six to two, so it will take two applications of these quads. A pair of diamonds will probably be great.

I would place them closer to the eye area, though, because the edges are not doing anything for you on their journey to where they are now.

If anyone can teach me a third technique I would be very appreciative.

@rking : Can you show an example ?

I figured the text description wouldn’t cut it. I was on my phone, though, so I couldn’t. Anyway, here are the two techniques I know: 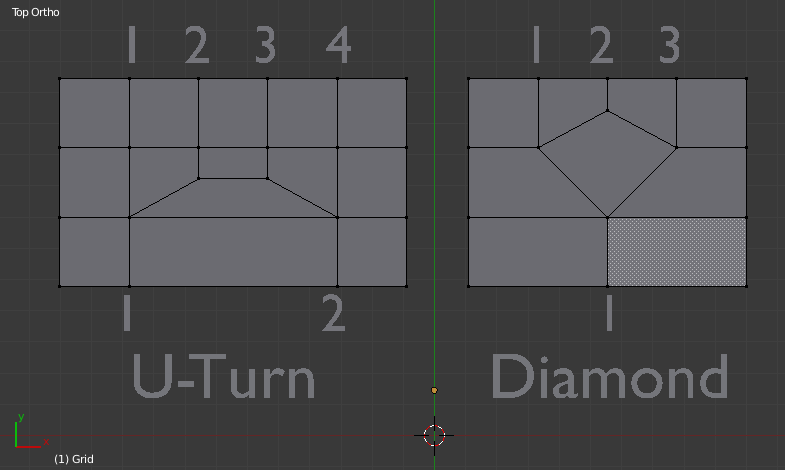 Note that you can select a partial Edge Ring (with Ctrl+Alt+RMB then use ‘b’ + MMB to deselct) then Merge-Collapse (Alt+m,o) to make the Diamond version. Perhaps I need to make a pic for that process, too. =)

Again, I hope there are more ways than these two but they are currently the only ones I know.

with Bmesh you can also use i think collapse or make an NGON!

In such cases I merged the inner vertices with the outer one, though that will create triangles.

@riking thanks for the methods.
Appreciate all the Help.
Worked great.

One question thought, how long does it take to bake high to low poly normals ? mine has been going on 6 minutes and has only started ?

I have 3Gb ram , 2.6 GHz and a 1Gb Graphics card.
Any idea why this is taking so long ?
And the normal map just stays purple ?