How to set white in procedural texturing

Hi,
i have problems to setting colors in the ramp of Clouds Texturing.

In the ramp i have blue and white, but in the rendering Blender gives me a texture blue and grey.
Why this happen in my exercise? Why It changes white with grey?

I show you what i see in my computer, may bee someone can understand the mystery.

I think it’s related to the “Energy” of the light source.
Try using a Sun instead of whatever light you are using, or increase the “Energy” setting of your current light and the white texture should be more white

you could also change your mat’s color for white and your texture for blusih
then for your basic mat color add some emit and that will make it very white!

I don’t think that Sanctuary’s solution is what i need.
I have tried as he says but the other color (blue) is too bright.
Anyway, a texture that shows a white color only of cause of the light, it isn’t manageable.

My question is why the preview shows me a white color and instead in the render i have grey.

colors in blender are not saturated or very bright
only way to get bright colors is to have some Emit or some hallow applied to it !

hope you get the idea here !

you could also change your mat’s color for white and your texture for blusih
then for your basic mat color add some emit and that will make it very white!

I need that the sphere is without any emit, in the way i can have the shadow at the other side of it.

Perhaps, this will remain a secret for Blender. :eek:

The position of the light has an importance in your scene, if you put it far, there’s then few light that will arrive to your sphere, and so the colors on it will get logically darker If you put it close, the colors will be brighter I have done as you said, Sanctuary, and i have now this rendering, exactly as yours.

So this mean that the white color in Blender it isn’t absolute like a painted color but relative to the light as it is in the reality?

It mean that the color white, when remain without light, looks like a grey color?

If this is the truth, why other colors don’t have this problem and can be set as on a graphic editor like Photoshop?

it’s the same for the other colors too, the more far they are from the light source, the darker they will be : In graphic editors, the color are plain, because they’re not subject to any kind of light.
If you want all the color to be as bright as possible, only “emit” or “shadeless” settings will provide that, but you’ll then lose the darker area.
Or you’ll have to play with several kind of lights, and tweak their settings to control their energy and distance , but again it may affect the dark area of the model you want to keep.

Your White for a material gets mixed with World’s default grey. Under World settings, change Horizon to White. 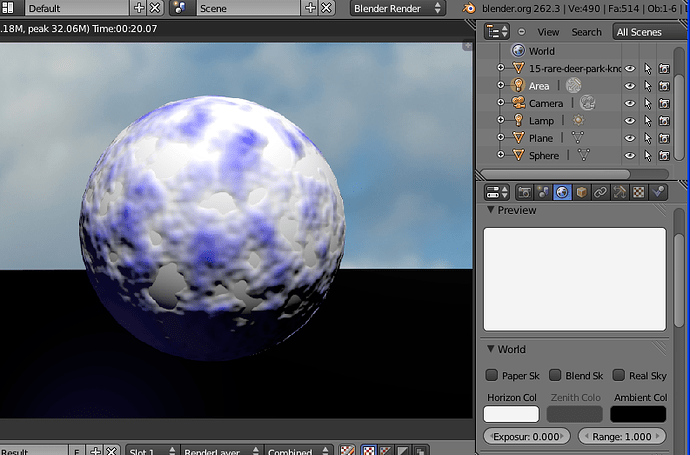 or if you don’t want the material to be influenced by the world
there is a var button to cancel the wordl effect on the material!

I have done my exercise and now i understand your suggestions.

I have used the sun as Sancuary said.
I have also used the Ambient Occlusion to reproduce the ambient light.

Then i thought about the suggestion of you, guys, and i did this exercices that i’ll show you in the next post.

In this post i show you my exercises in the space ambient.

In both images, i used light, with energy at 2.840, the light was at almost 10 blender units from the sphere.
In the Material window i set diffuse intensity at 0.8, and specular intensity at 0.5
Hardnes was 50

In the top image the light is ‘Point’, too weak to show us the white color of the ball.

In the second image the light was ‘Sun’.
And voilà the white color !!

Next come my exercises in the atmosphere.

In these two images, the light energy was set at the same as the images before, with the ball in the space. The only difference is the Ambient Occlusion with factor at 0.44.

In these four exercises i learned that before deciding the colors of my 3D scene, i have to decide where the scene is placed: in the space, or in earth’s atmosphere?
And ‘light point’ and ‘light sun’ have different power, also if the energy has been set at the same value: so i have to decide also what kind of light to use in my scene, because is not the same type of lighting and it change deeply my scene.

Now, after these exercises with light, when i live in my house, i watch things on the table and i see how light shows me their colors, where the shadow is, how much strong is that shadow, and i find that grey that i believed it would give me much problem.

In blender, we don’t create a 3D image, we create the reality, this is the first thing we must think about, and that’s why i had this problem with white color.

Thank you guys for letting me know.