How to take this further?

I think I am completed with modelling and texturing this piece. However, I wanted to ask for some feedback/critique before I render the final size (poster size).

I feel like my modelling etc is fine, but I always seem to fall at the last hurdle at squeezing everything I can from the image.

Here I’ve made some simple changes - In this version I decided to use HDRI lighting, instead of my initial more flat lighting. I also added some film grain, some blur to the corners and a little sharpening. I then used the “pop” filter on google photos to edit it a little further. Maybe it’s too much.

I’d be really interested to hear how it looks on multiple devices - is it too dark? (is there I could “normalise” this?) etc. 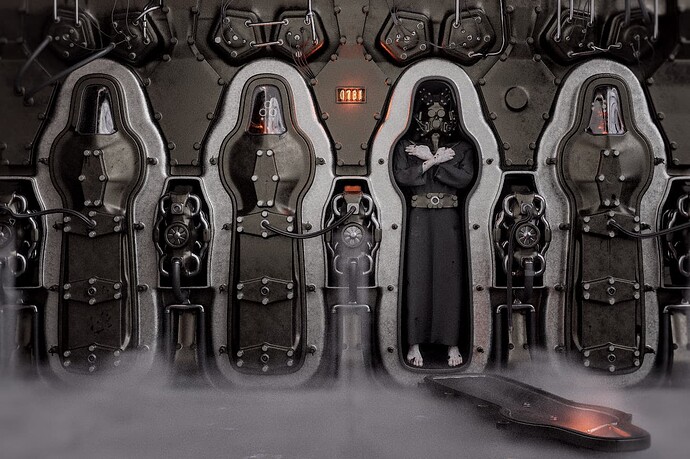 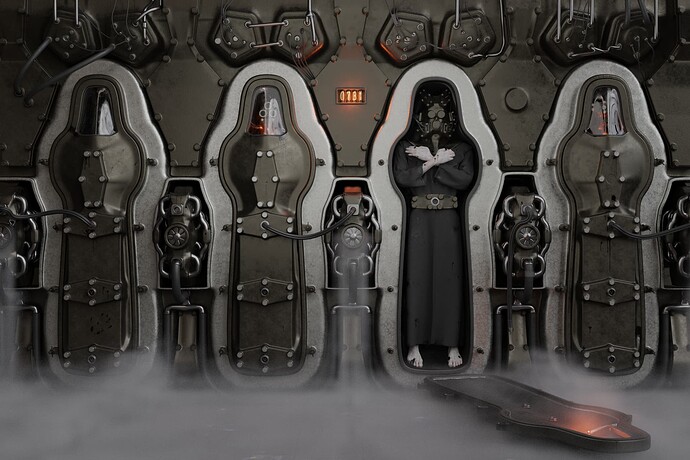 I do think that your overall tone is a lot better on the hdri one. only texturing comment I have is that most of the metal looks plasticy. the sarcophagus lids are fine. not a big deal, if you like where they are at and that style is what you going for, cool.

The fog would be “cooler” maybe if it was billowing down out of the open sarcophagus, still low lying fog, just origin point changed. fog looks like it was painted in in photoshop in 2 minutes. If maybe it was a little more defined or stringy or something. Think you called them “diesel Priests” or something previously. what if you made the fog black as the smoke from a punk kids pickup? would bring some weight into the picture.

The biggest suggestion I have, is I see lots of potential for absolutely awesome lighting here! you have some orange elements, and I like that a lot, behind the glass I see a little orange, what if you did backlighting behind your dudes, make it orange, would help frame the open dude. would also suggest turning your overall lighting way down (leave the hdri, just tone it down), so that you can have more contrast of light, and light color.

Did a quick overall lighting retouch in lightroom, just to kinda sho the mood im thinking. Details that I mentioned are obviously not there. 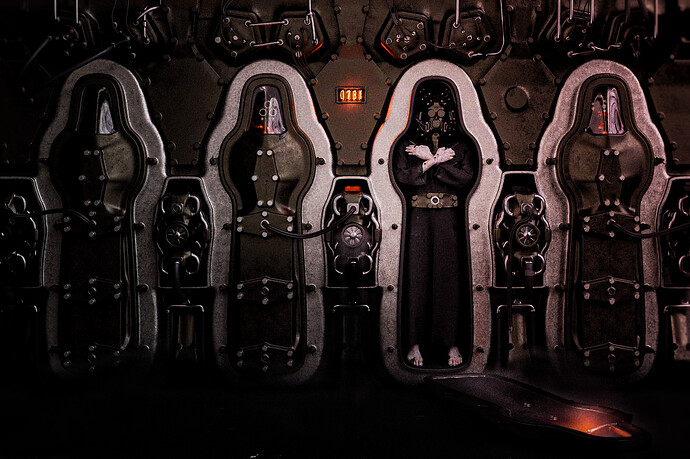 hopefully that picture doesnt show up to dark, I have a lousy way to bright monitor that is going to get replaced for that reason… hard to set proper brightness

Thanks @ericthered, these are some good suggestions.

Funnily enough, my original idea was to have the fog come from the casket. But then I thought it’d take such a long time to open the door (see thumbscrews) that unless there was a constant fog machine, it’d have dispersed by the time you took this shot.

I might try that anyway - the smoke simulation takes a while to bake on my machine, but hey ho. For the fog itself, yes, I’ve been struggling to get “depth” to it, I’m going to need to play around with the volume settings. I wanted a light, wispy sort of fog, but I can’t quite get it right, and as you say it’s rather flat looking. Perhaps smog is the way to go. I’m just wary of making everything too dark. Although when I look on this again, I do think there could do with being more grime too.

The metal textures are a little frustrating - they look great from more oblique angles (and up close, they really do look like cast metal dripping in WD40), but with this head on shot it doesn’t quite come through.

Re: lighting - yes, my achillies heel. But I see what you mean with greater contrast and depth of light. The more I look at the scene, the more I think it looks like a macro photograph of a model diorama. Time for more experimenting…