How would you rig this owl and what do you think of Him? 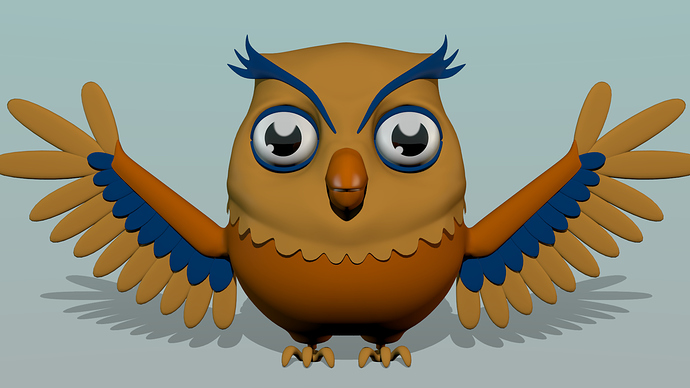 I’m trying to get him rigged up and animated for here to show to my boss and see what they think of him and hopefully get to use him. I’m a starter in all this ( sort of ). I’ve done a lot of thing’s just not finish any of them. This is going and has to be my first and finished project. I want to get into animation and 3d gaming and dream of having my own studio one day and offer classes for people around here. I need any appending on anything to get myself off the ground would take with great appreciation.

1.) What do you think of the owl ( it’s one of the company character that I 3d it )
2.) How would you go about rigging him.
3.) How long should a short animation reel should be to show him off.

All in my opinion

Oooh, so somebody else likes making owls other than me! I would basically say the same thing as the squidifier.

Thank you
Would use b_bones by chance?

B_Bones don’t make any difference to Octahedrons (If I understand you correctly) Because the whole Octahedrons, Stick, B_Bones thing is just a way of displaying them, they don’t affect the bone’s behaviour at all…

I would do more if I knew how to, but this is what I know how to do.

First, make a regular FK/IK skeleton for the head, back, legs and wings.
Second, make some shape keys for controlling the eye lids and the beak. Add some shaped bones to control the shape keys.
Third, make bones for the eyes to “track to”.
Fourth, make bones for each of the feathers and weight point the feathers to the bones. Add a copy rotation bone constraint to the feather bones and adjust it the influence till it looks correct. If done correctly, you can have feather spread as the wing opens.

These are very good advice. Thank you all for responding I will finish him and get him animated and if you want to see the final result let me know…

Thank you and any advice is out there please let me hear them thank you.

Um, don’t just use one bone per wing unless you want him to be flailing around like both of them are in a cast. See if you can find some of the plumiferos character rigs. they’re a little outdated, but they are very useful for bird rig ideas. Basically, you want the owl to be able to spread the wings, so you’ll need to have a few wing bones along the length of each wing. On each of those bones, you could link the individual feathers with a copy rotation constraint each with varying levels of influence so that when the wing bends, the feathers will spread apart and together. You could also rig an IK setup for each wing for more smooth deformation and movement.

these are just ideas, but I think they may be a good alternative to having your owl look like he has two broomsticks tied to either wing.

EDIT: Oh, looks like macktruck already gave you this idea.