Have you looked into ArmorPaint? My recommendation would be Substance Painter, but that’s pretty expensive and Adobe is busy screwing up the license system. ArmorPaint, however, looks promising.

I’m trying to use as few apps as possible, and part of the objective with the teeth was to assess the texture painting in Blender. I might give it another chance and see if I can improve the performance, otherwise it might be back to Sculptris (or ArmorPaint, which I haven’t tried). Frankly I wouldn’t touch Adobe products with a barge pole…

have you seen the stuff Pablo Dobarro is cooking up?

Yes I’ve been keeping an eye on that. He’s already been improving 2D painting, wouldn’t surprise me if he does the same for 3D.

could you explain why you are using a volume node? I thought it was good for stuff like fog and other atmospheric effects, but I suppose with a density value of 420 you are using it to make the teeth and gums a little bit translucent, am I guessing it right?

Correct. Teeth are more translucent at the edges, and SSS doesn’t achieve that by itself. The volume node isn’t solving it too well either, but it’s better than nothing.

I was also curious as to why you use separate nodes and mixing them together, rather than using the Principled BSDF node. Do they give you more control, or is it because the latter has parameters you don’t need?

Principled’s SSS is inferior apparently (I intend to test this properly one day), and there was another reason that escapes me now. Something to do with separating the glossiness from the refraction. I’m trying a version with Principled now to verify.

Sorry about the barrage of questions, feel free to ignore them if explaining all that takes too long, I’m just curious about all that stuff.

No problem, all good questions.

Here’s the original vs Principled. There’s not much in it, even using Principled’s SSS. Maybe I was trying something earlier that meant I had to separate them out, but then it evolved into something that Principled could have handled after all. 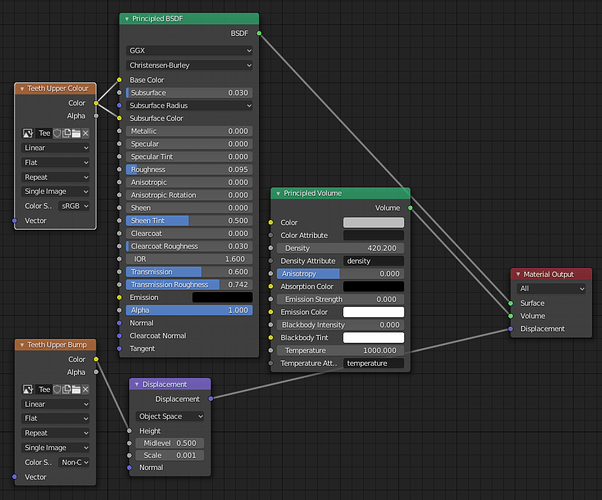 The fresnel looks a bit stronger, so I’m starting to wonder if I had it set up wrongly in the discrete version.

Here’s the original vs Principled. There’s not much in it, even using Principled’s SSS. Maybe I was trying something earlier that meant I had to separate them out, but then it evolved into something that Principled could have handled after all.

so you going to use the discrete vestion or the principled version?

As in hobbies? I guess this is my hobby (or so I’ve been told).

I mean like, what do you do when you’re not doing this? (Needed to replace another one, that’s why I replied to a different post)

Another exciting UV unwrap, this time for the rest of the body. The old one became a little bit mangled after I altered the geometry, so I’ve redone it and improved it in the process.

The object of this game of course is to keep the checkers as undistorted as possible and of uniform scale (or thereabouts - I allowed some extra res in places), while making maximal use of the surface area. In addition to this I wanted the UV islands to be legible for painting in a 2D app, and symmetrical so that they can be mirrored easily. This required a good deal of manual reshaping after the initial unwrap. 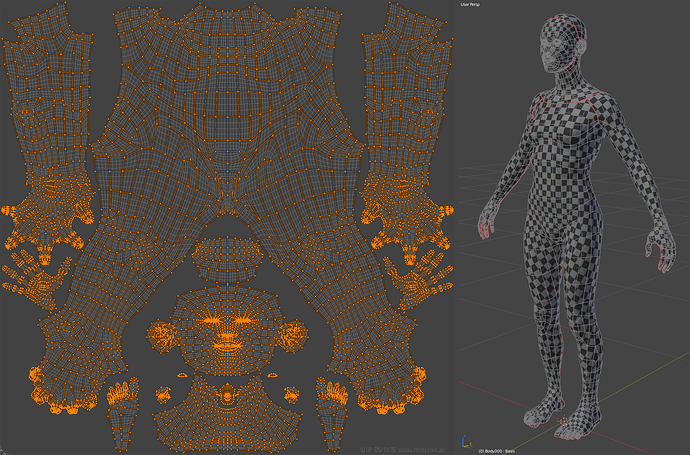 I’ve also redone my alternate UV map that maximises the facial area, so it now also has a bit more resolution and less distortion than before. 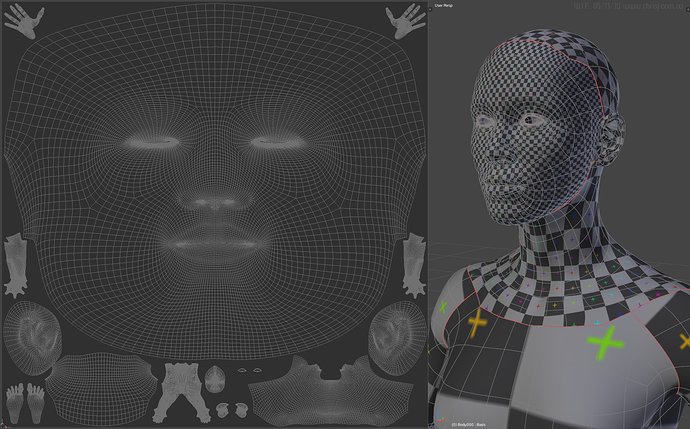 Those are the teeth and gum nodes.

so you going to use the discrete vestion or the principled version?

Haven’t made my mind up. Which do you prefer?

I mean like, what do you do when you’re not doing this? (Needed to replace another one, that’s why I replied to a different post)

Eat, sleep, browse the forums, go to the shops to get more to eat… that sort of thing.

I think the principled bsdf version looks better here, just for the stronger fresnel effect. But the difference is so small that is only visible when you put them on a comparison gif like this so really it doesn’t makes much of a difference which one you decide to use.

I’d choose the one that renders faster…

Those were my thoughts as well. Haven’t done a speed test, but I bet they take the exact same time.

Not sure it will really matter. Would be a really weird shot if we are ever gonna see it like this

There must be an addon for this. Really sound like something could check the textures every now and then. Its basically simply a timer which would update the texturens every nth second.

I did fiunbd a paid one, he charges $16 for it and doesnt seem to really work i f check comments.

I also foudn something different. Its not for Krita though, but perhaps can be altered or added. 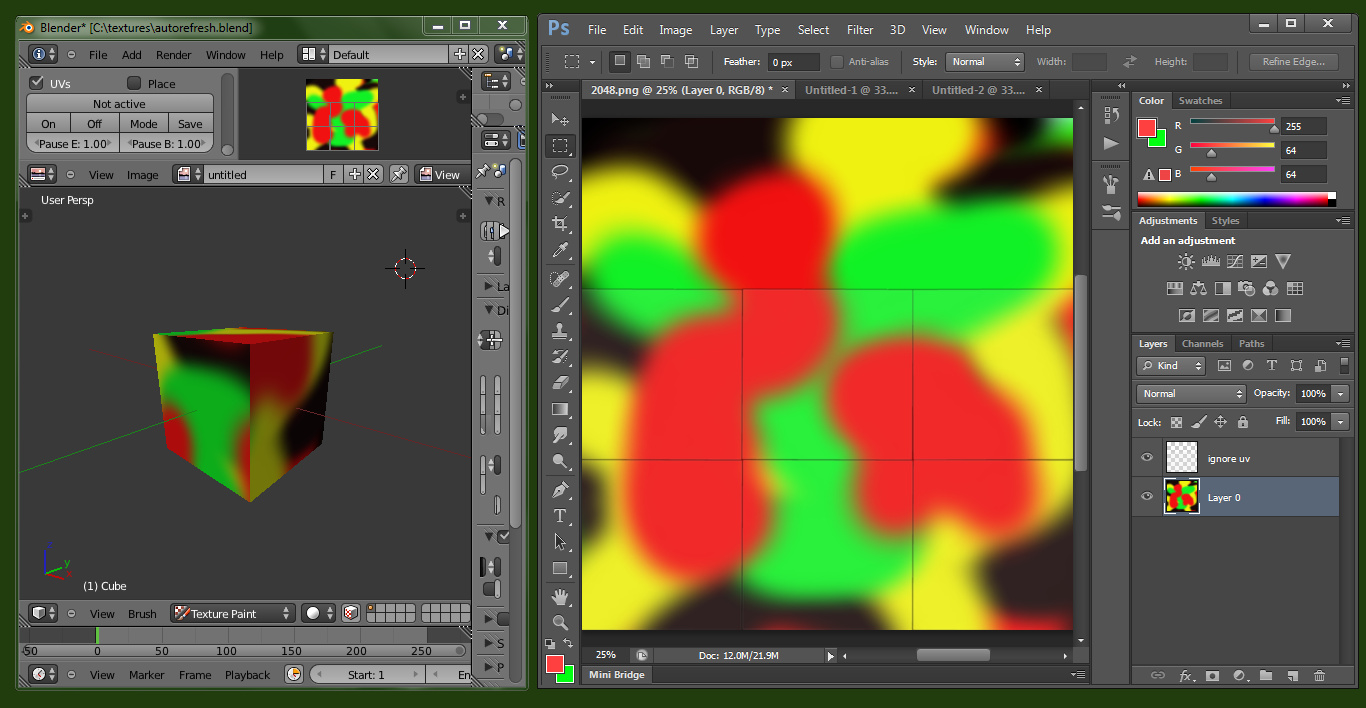 How do you get around the Displacement Scale being .001??? I had to CRANK the contrast for it to be even barely noticeable, or change the Scale to .01!

Which do you prefer?

Correct. Teeth are more translucent at the edges, and SSS doesn’t achieve that by itself. The volume node isn’t solving it too well either, but it’s better than nothing.

I’m sure you have tried, but this shouldn’t need to be the case with random walk SSS? I noticed in those nodes that you had used Christensen-Burley.

In my limited experience, random walk has acted much more as expected for thin geometry

There must be an addon for this.

It’s an idea, although by the time I get back around to texturing again the texture paint part of Blender will have transformed into Krita the rate things are going.

In the mean time I can live with the inconvenience.

How do you get around the Displacement Scale being .001???

Not sure what you mean, but you might want to check if your model is in the wrong scale again.

I’m sure you have tried, but this shouldn’t need to be the case with random walk SSS? I noticed in those nodes that you had used Christensen-Burley.

I didn’t see much of a difference with Random Walk in terms of transparency, but it does enhance the bumps a bit with a sort of “greyness” that’s not apparent on actual teeth. Turning up the SSS scale makes a sort of gradient, I can’t tell if it’s actually making it more transparent or not though. Needs further investigation.

What’s with your image names?

It’s my alphanumeric versioning system (1a, 1b, 1c…1z, 2a 2b etc.). Makes for smaller file names and avoids mix ups in image sequence numbering. The image name corresponds with the version of the human it was rendered from so I can find the file if I need to revisit.

Hi, Your work is very inspiring. Thought I ask away…
Can you give any tips on painting skin? specially the face? I’m struggling so hard with it.
I’m not asking for a hand holding but I need to know what you should look for in doing it. I always feel lost.

I know this Is probably a long shot but could someone please explain the skin material screen shot Chris Jones has posted? I would be happy to pay for it actually.

I’m new to blender, however used some basic software before (octane with cinema and keyshot).

Or maybe there’s some tutorial you guys could redirect me to?

The work is just astonishing and inspiring, sets the right bar

Ok. GAAAAAAAAAAAASP
The Attribute ‘Caruncle’ is to seperate the caruncle nodes with the main head nodes.
The MixRGB in the Displacement is to mix the Bump Map and the Displacement Map.
The Attribute ‘Eyeball Smoo…’ means ‘Eyeball Smooth’ and takes the Bump Map away from the bits that don’t need it.
The Diffuse BSDF is replaced with SSS BSDF because it looks more realistic.
The Roughness in the Glossy BSDF is inverted because for some reason inverting the Specular Map to make the Rougness Map is good.
There are 2 SSS BSDFs because one is for the caruncle.
The Fresnel is so that the Glossy BSDF is only on the outside.
Phew, I hope that explained everything that was confusing!
Also, @ChrisJones, correct me if I got any of that wrong.

thank you very much!!