I saw the package contains 3 race faces and bodies on 2 genders male and female. That made like 6 kind of meshes.

The races and genders are separate purchases that can be added to the rig, so that they all use the one mesh. There’s a brief overview of each on this page.

I also understood we’re able to sculpt the meshes to add some details. But, because of the shape keys, it’d be complicated to have sculpts which change the “topology” of the meshes? For example, after ad a MultiRes modifier, ad big muscles, or change the facial features to create some “exclusive” characters? Will it cost issues when we’ll manage the rig? (especially on the faces)

You can change the topology, but it might require some weight painting and editing of the corrective shape keys in highly deforming areas (e.g. elbows and knees). Changing the face topology is generally best avoided, since the shape keys there are very sensitive to changes.

Multires doesn’t change the topology though, so I recommend either using that, or baking displacement maps from a separate mesh. Some weight and shape key adjustments might still be necessary though if the sculpt strays far enough from the base shape.

My second question is about retargetting. Is this possible to use animations from a Rokoko vest and/or Mixamo fbx on this rig?

The rig was made without regard to retargetting, so any compatibility with those tools would be coincidental. I might look into what’s involved in supporting mocap data at some point, but for now you’d need to take those matters into your own hands.

Do the wrinkles you ad few months ago are packed in the Universal Human Body and Face Rig?

Not at the moment - I don’t know yet whether they’ll be included as part of the textures, which will most likely be sold separately.

the documentation is poor (and I truly understand, in view of all the work Chris have to do).

All the functionality is covered in the reference charts, but yes some workflow examples would be helpful.

Other thing: The tongue and teeth are in the head base mesh?

Thank You Michael for the info. I keep that in mind

Correct, except you don’t need a gender head - the full body gender already has one of those.

And no the head base mesh doesn’t have the teeth and tongue, but the Face Rig and the Body & Face Rig do.

So for the full set you’d need the Body & Face Rig, Male (or Female) Base Mesh, and African, Asian and European Head Base Meshes.

You’re a MASTER! Thank You. I hope I’ll be able to do magic with these crazy assets!
I take this opportunity to ask if you make updates on meshes by adding shape or other tricks you’ve got inside you. Will we have a way to update our purchase?

Occasionally there are free fixes and refinements, which can be downloaded from your Gumroad library I think, or directly from the product page (I’ve never tried it - maybe someone can confirm?). Sometimes new features find their way into existing products as well, but there’s no guarantee to that effect… so it’s best to assume they’re “feature complete” as is.

You can see the update history in the release log.

Also…Another question (sorry)… Because there’re Shape Keys, is it possible to change the Rest Position of the rig? For example, to set it as T-Pose and/or A Pose? Thank You!

I gave a T-pose a try and it seems to work, although you’d need to do some shoulder remodelling and adjust several of the corrective shape key drivers by the looks of it.

Quick question, how much do you plan to charge for the universal human textures ? And will it be a pack with different skin tones , different displacement maps, anything like that ?

Hey @ChrisJones I just bought the complete pack and it’s incredible! You made such a great work!
I have a problem…As I want to dress my charcter, I need to export my animations as fbx. I made a black male and export my fbx animation…But When I import it, I have the animation but on the european female. Is there a tip to succeed my export/import fbx with all your shape keys and drivers?..Thank You!

My bad! antother one…
I also want to add eyebrows, bear etc… on my character. I create meshes and parented it to the armature. I it comes with the head when I move it for example but I also want to assign them the weight paint to move with the brows and eyelid bones…But there aren’t present in the vertex groups…

@Adrien_Delmas Not sure how much yet, but so far I’ve spent about as much time on the textures as the rig, if that’s any indication. Ideally it would be a single general purpose skin, but it’s still too early to tell.

@Max_Shoes I’m no expert on import/export, but it’s likely you will lose drivers and other things if you’re exporting to another app. You might need to use “New Shape From Mix” in the Shape Key Specials menu and apply that to the Basis using “Blend From Shape” before exporting.

The face uses mostly shape keys, hence the lack of vertex groups. If you’re using mesh hair, try sticking it to the face with the Mesh Deform modifier.

Thank You Chris for your answer.
So, concerning the export. It was very complicated! Impossible to export a correct FBX. I succeeded to Blend from Shape as you told me but the problem was a crazy armature with strange bones etc… (maybe a FK/IK issue…I don’t know).
I chosed to use an alembic (.abc) export for Marvelous Designer. And it works well!

Concerning the “elements” I want to put on the mesh such as eyebrows, hairs, beards etc… I reallly didn’t find a way. I will work again and tell you if I find a way!

Hey @ChrisJones , I tried re UVing the mesh to fit it to a character creator texture, but it looks like the eye hes a mirroring problem.
When I try to copy mirrored UV coords, the eye has some parts missing, and it has been the same when i tried to simply edit the mesh, only parts of the eye was not following the edit 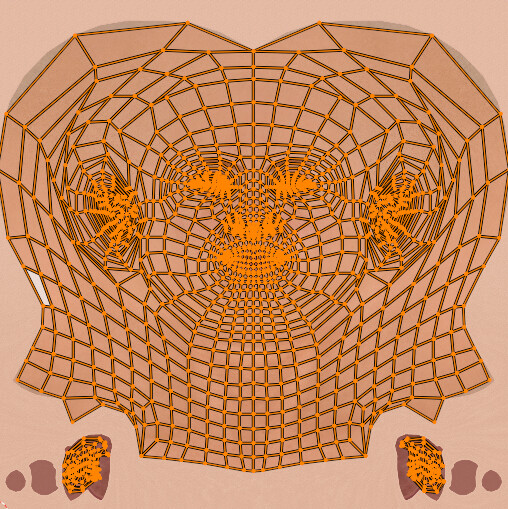 Try turning the precision up to 5 or so when using Copy Mirrored UV Coords. I’m constantly having to do that, not sure why. It’s a quirk.

alright, already did it by hand anyways but just wanted to inform you, thanks !

Hey! I’m back! Just to be sure of something. I’m trying to add all the “races” on my body. I follow the instructions and it works for the 1st one (I tried the African first, then I retry with the Asian…). But as soon as I try to append the 2nd one, i have this message right after clicking on “Join as Shapes” : “Selected meshes must have equal numbers of vertices”. Sorry for bothering you!

Are you using the most recent updates of each component, and have you tried starting with the unmodified rig file? If so, send me an email and I’ll sort you out.

Hi Chris! I just wanna ask a question about your hardware in making these awesome realistic human faces. because currently right now I have a ryzen 7 3700x cpu and also an rtx 2070super gpu and I am always having these problem when I use displacement texture from texturexyz. its says “Cuda error: out of memory” and Iam using Optix to render. and its also the same even if I switch to cpu rendering. and that is why Iam struggling to progress in my work because of that specific error. do you have anytips for managing memories and how to handle a heavy project like what you do without encountering that error so frequently? Thanks in advance!