Modeling - Blender 2.42a
Rendered with Blender internal renderer
The image used for the calendar is by Rob Williams (rob.orangejack.com)

This project started with a sketch of a garlic crusher. I have been reading “Drawing on the Right Side of the Brain” by Betty Edwards, and I chose the garlic crusher for one of the exercises. I like the way it turned out, so I decided to model it in Blender. Over the last month or so it grew into the “Hungry?” scene.

For the second image, I modified the pasta - used an image instead of procedural texture, lowered the spec, and decreased the size of the strands.
I also added bmp to the tomatoes.

Thanks for the advice! 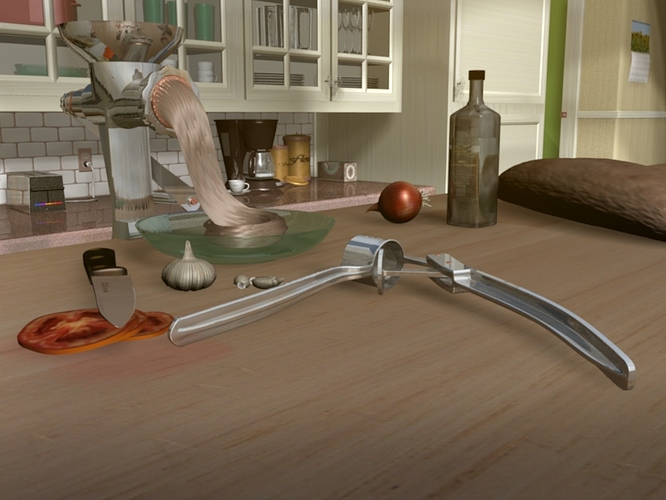 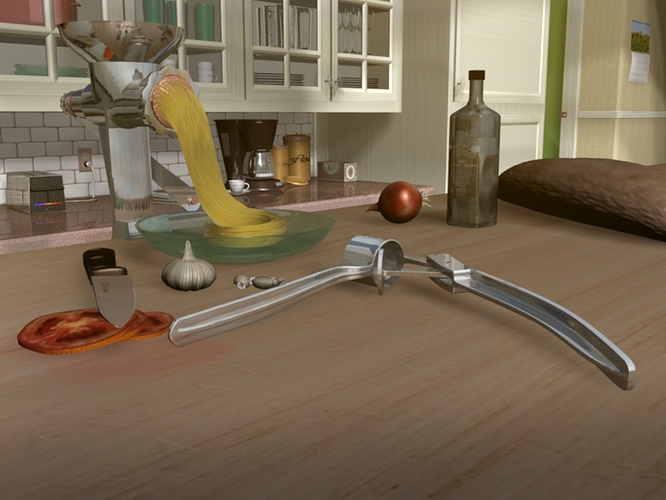 i appreciate the work in modeling the whole kitchen. as a crit, I am not hungry for hair.

Also, the inside of the tomatoes really look flat. at least give them a good bump map.

Scroll to the bottom

nice looking garlic, maybe reducing the hardness on the potato or what ever it is would make it look less like hair
i agree with cyborg dragon on the tomatoes the colour looks a bit dull

The pasta doesn’t shade itself though, and it looks a bit too specular for pasta. Still though, this is almost a very good picture, with a little more work it’d be great.

The tomatoes look a little funny. Maybe if you bump mapped them a little bit more… I dunno. They look odd because they’re still flat.

This is more of a personal preference, but renders that have no distance of focus bother me a little. It messes with my eyes. If you’re trying to emulate reality, this is something to keep in mind.

much better. Need more bump on the tomato, what’s with the clear block plugged in on the counter? Need to add a cloud texture to the pasta maker - it’s too perfect.

Not that this is in WiP, but you’ve obviously put some work into it so…

Material on the microwave is too reflective, it’s not a mirror is it?

Looks pretty good, lol the first one does look like hair but you fixed that. Nice work.

Looks great! I think it all seems a bit out of proportion though. The tomato looks huge!