I am an Artist

Hey everyone! I need some advice on this new work.
I’m creating this one based on two drawings from a children’s book by Marta Altés called I am an Artist. I love this book,
which gave me the idea to turn it to 3D. It’s about a kid that lives and loves art, despite his mother despair to try to keep the house in one piece

I still have to finish the boy’s face texture, add the wires holding the objects in the desk lamp.
The desk lamp is still to be finished as well, though I don’t know exactly what goes best, a bit cartoony or a more detailed real desk lamp.

As it is based in a drawing, I’m going for a frontal shot against an almost flat background to keep some sort of a 2D framing.
The detail is aimed towards examples like Despicable Me. Enough detail, with cartoony forms.
I went for a full carpet floor to emphasize the mess in the floor, which might be much harder to clean.
As it is a children’s design I want it colourful and bright, so I chose also a more coloured and childish wallpaper, which in turn makes it more difficult to combine with all the colors in the foreground.
I hope it is already able to depict what I see in my head

I need expert advise from you all, because I’m not entirely shure mainly about the composition, framing and color. But you can talk about anything. 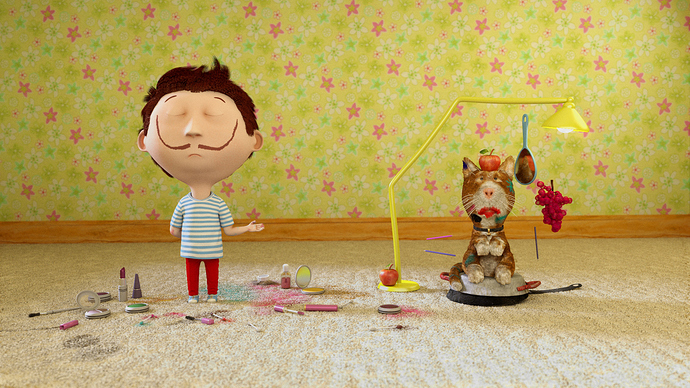 By the way, it took my i7 PC about 8h to render this one, with not enough samples. This is mainly because of all the hair particles, so I have to think of a way to optimise it a bit more…
The original are basically two drawings in consecutive pages, very clean with a lot of character. I really like all the art by Marta Cortés.
I thought adding the carpet and the background would make it more into the 3D realm and give it depth.

I like it, but maybe the wall is a little bit too far back, if your trying to keep the “2d feel”, the wall is doing the opposite.
I might go find a copy of that book now aha

I like it a lot! Nice story and charming scene. My son likes it a lot too

Only advice, if i can give one, is that the fat looks a bit flat. Maybe it is too low poly, or maybe it should recieve direct light (like the boy) to pop out a bit more.
I’d be happy to see more

Thanks for the comments!
@AllanOcelot The reason I had it so far back was to make it more blurry with the DoF and a bit darker, so it wouldn’t get in the way with the foreground. But it might work, I’ve pushed it as you say, tomorrow, I’ll see how the render turns out

@FredHystair I understand the point about the cat. In fact it is for different reasons. The cat has lots of hair particles (it’s better noticed at full resolution) and as the render it’s blended with an AO pass, it makes it gets too dark. To change this I included an object index pass on cat, to make it blend with a Different brighter combination. That’s why it got so flat. I’ve included now a light to try to add contour and volume, and I’ll change the blending as well.

great piece. I think the grapes are too saturated.

I’ve changed the grapes colour, and augmented the stains on the floor. Indeed it wasn’t very noticeable.

Added now some more details and am in the process of “dressing” the cat. Still not sure if it is worth it or not. Hope tomorrow to have something to show.
Now a bit off topic: I had to hide this book from my daughter (2y.o.)… She really loves to draw, and as because of this, she probably thinks it is ok to paint walls, floors, chairs, etc etc…

I’ve changed the grapes colour, and augmented the stains on the floor. Indeed it wasn’t very noticeable.

Added now some more details and am in the process of “dressing” the cat. Still not sure if it is worth it or not. Hope tomorrow to have something to show.
Now a bit off topic: I had to hide this book from my daughter (2y.o.)… She really loves to draw, and as because of this, she probably thinks it is ok to paint walls, floors, chairs, etc etc…

give your daughter a mini cardboard box with open top and paper on the inside and tell her that she can paint wherever she wants in the box (if you somehow manage to tell that to a 2 y.o )

hehehe Great idea! It’s one more to add to all the activities repertoire for a 2 y.o.

Back with an update, I think I’m finished, though probably there are some more details to adjust… I may add some small label on the nail varnishes later.
This is a straight-out-of-blender render, with an small overlay with AO (and a bit not so much for the cat, to keep it clearer)
Took my pc some 18h to render a 2560x1440 (damn all those particles)
Now my biggest concern is that it might have too much light… 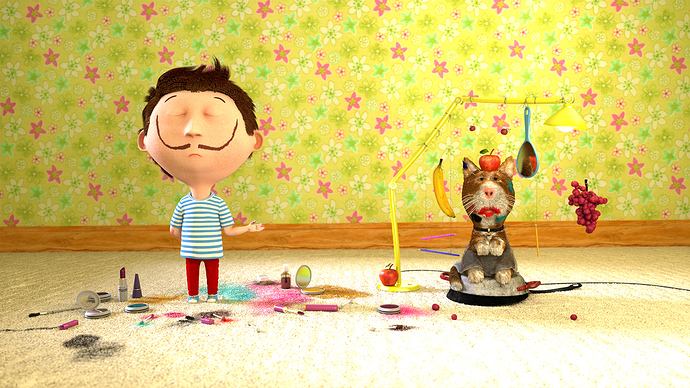 And here the AO pass 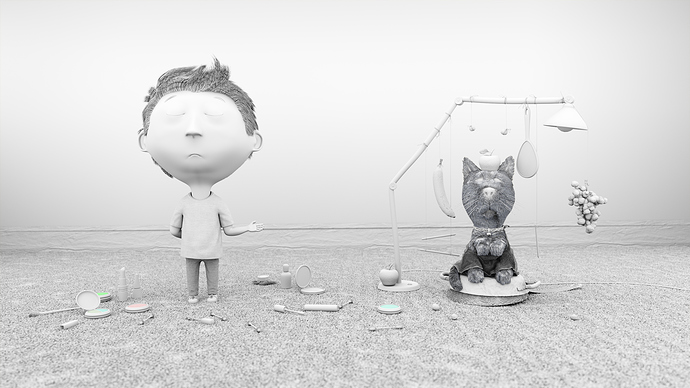 The colour and brightness of the back wall is quite distracting I think, same for the floor. Remember where the focal point is, and make every colour choice a conscious decision aimed at aesthetics and drawing the eye to your focal point.