I can't see the 2nd layer rendered in the Compositor

I have been following BlenderGuru’s

tutorial.
So far so good, except until now when doing the compositing.

I believe I have followed every step he mentioned, I have also revised them a few times. Yet when I change the ID Mask’s Index (as he does), nothing changes on my screen.
I did assign the Material Pass Index to the material that will be glowing, which is on the 2nd layer. The Render layers are correctly setup, with the main layer set to create the Mat Index pass.

Anyway, you can inspect my test file should you want. nopass.blend (588 KB)

Thanks in advance guys, 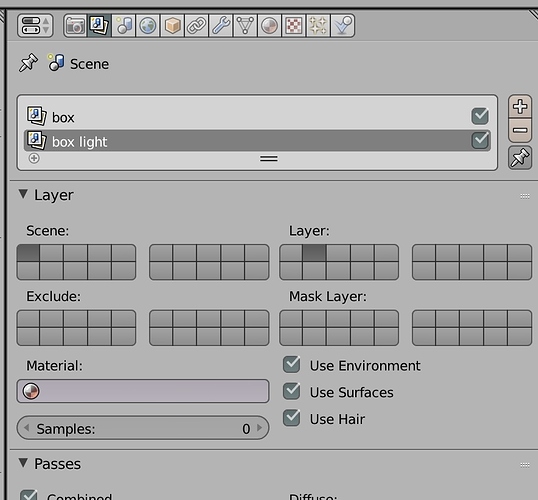 If I understand, should both Scene layers be enabled for both Render layers?
I did enable both Scene layers and rendered again. When I go to the ID Mask node, and switch from index 0 to index 1 it changes from all white to all black. Nothing else. I assigned index 1 only to the Emitting material on the 2nd Scene layer only, yet it’s the whole scene that shows in black when I switch to that index number.

Unfortunately that would be opposite to what was shown in the tutorial. If you go to

This is part of a screen shot taken from that tutorial. 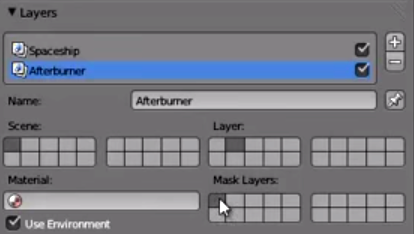 Mine doesn’t have a Mask enabled because I have nothing to mask.

in the video where one can see it.

What do you want to do with this. Move the bottom light plane up slightly above the base of the other object then use layer 1 as a mask so you don’t see the light plane hidden by the box 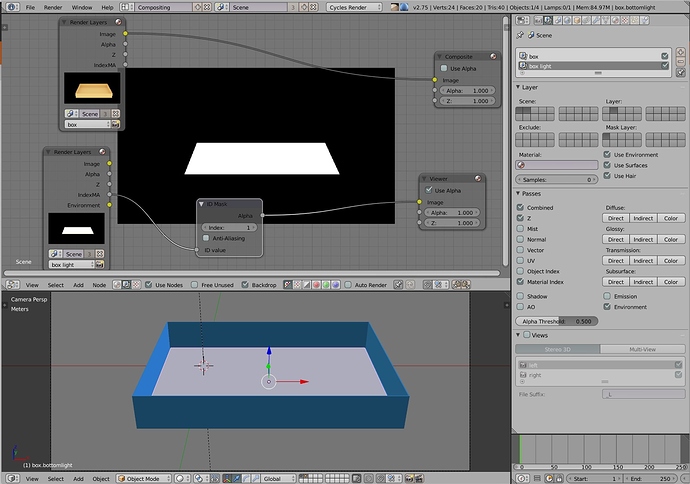 Thanks Richard, I guess I did need that mask after all. Now the glow shows. Which is a positive thing, that’s good.
HOWEVER, the glow is being applied to the whole box, as opposed to just that separate plane in scene layer #2

To better spot my mistake I took down every step from the tutorial. Needless to say I re-reviewed every single step to ensure I got them right. Would you please check it up? I am also including an updated .blend file here with the rest of the compositing nodes added.
Since we can only attach 3 files per post I’ll have to break it into 2 or more posts…
Assign the Emitting material to the mesh you want.

b) Go to the Render layers tab, create a 2nd render layer with the name of the mesh (for descriptive purposes) 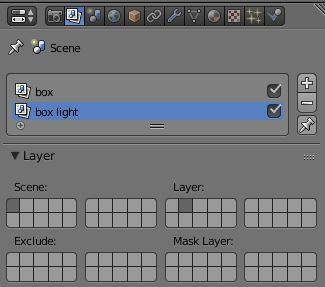 c) While having the main layer selected, checkmark “Material index” below under Passes. This will add an IndexMA socket to our Render layers node (as long as the main render layer is chosen at the bottom of the node).

e) Set up the Compositor nodes - 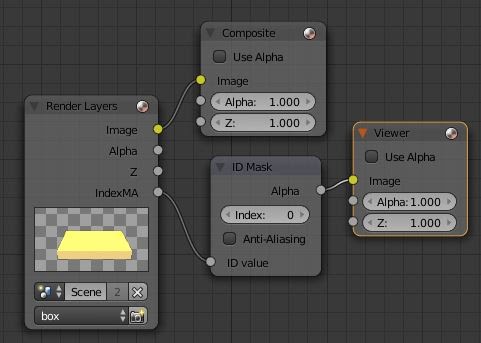 While the Index is 0 in the ID Mask node you should see the image below (Which is what’s in Scene layer 2): 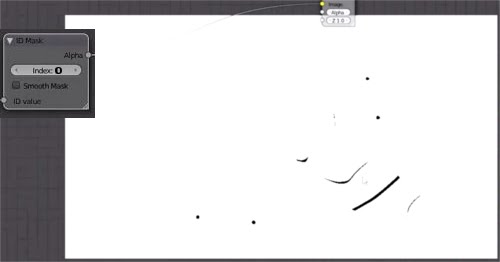 e) In the Mix node, change the top image socket color from white to black.

g) Once added and set up with the above values, bring those 2 additional Mix nodes using “Screen” it should show what’s above.
The End.

Ok now, my problem is so basic that if you go back to step e), instead of seen what’s in the Scene layer #2 when selecting the ID Mask node, it just shows me a black screen. Well, that was before setting up the rest of the nodes. Now with all the nodes setup it shows me the box completely glowing

So I hope with this extra info and the new .blend file nopass_02.blend (621 KB) we can finally get to the bottom of this tedious mystery

Thank you so much in advance Richard

Hey Javier, I got your comment on my video and couldn’t reply there so thought I’d reply here while trying to solve your problem here aswell

In the file you sent me, you’ve got two different render layers set up, in your compositor you’re only “calling upon” one; 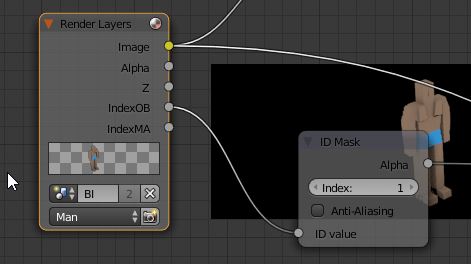 So all the object information (in particular the indices) is being split up, you can either bring in a second Render Layer node and set that to your second Render Layer, or just scrap the Render Layer idea anyway and have all the Scene Layers rendered in one Render Layer.
Then you get the two results with Index set to 0 or 1 (make sure you enable “Use Alpha”, makes it a lot easier to see the difference between transparent bits and the colours left behind by no index);

The same goes for the problem you’re having here. As far as I know (haven’t sat through the whole video) Andrew uses the Render Layers to break apart his scene into the Spaceship itself (all emmision objects included), the jet ion-ey flame stuff and then the steam trails left behind.
So yeah, until you have your objects all in one Render Layer, your Material(/Object) Indices are basically useless unless you combine all the Image and IndexMA outputs OR save the hassle and just bring it all onto one Render Layer.

Hopefully that all made sense :S Let me know if anything needs clarifying

Hi ET, you have no idea how excited I was to hear from you

I tried your suggestion about keeping all in one layer, along with a 2nd render layer (as Richard and you had suggested). It did work. It did finally show the isolated emitting board. Then I implemented the rest of the needed nodes for the glowing and put both render layers together with an Alpha Over, that’s it!

Now the only problem I have is that for some reason (there’s always something, it seems) when I try to reproduce the nodes setup and everything else with the actual final scene (a different file) the glow is not showing together with the box of donuts. Which makes no sense as I literally copy pasted the nodes from the dummie file where it is working.

I must say though, I’m still curious as to why it would not worked with 1 render layer node, and only the 1st scene layer enabled as Price had it. Anyway…

Btw, I re edited this post with some helpful images, but they only show while in edit mode

I’ll try to re edit it later.

Glad we managed to sort one problem

If you want to just slap your blend file here http://www.pasteall.org/blend/ and give me the link then I can have a look at it and see what’s up.

Thanks a lot for the offer. I’ll take a rain check for now. I might be on to something. As I was preparing a lighter version of the original file (a tad over 100Mb), mostly removing textures and materials, and a few meshes (seemingly irrelevant), it showed to work when doing a test just before sending it over. So I’ll have a closer look at the things I removed.
Thanks again ET

Ok, after closer inspection I discovered that the glow effect is behind the box! Not over it. I swapped the emitting material for a regular diffuse mat to see this more clearly. With it, you get the “illusion” that the glow is over the donuts, but it is really behind the box.
I suppose I need to render the glow with alpha to then switch the position with the box so the glow is over the donuts. I imagine that thanks to the Mask on the Box light render layer the glow won’t cover the donuts. I just don’t know how to get it done

Thanks in advance ET

Thanks to Bithur from Blender Stack Exchange I got the glow effect on top of the donuts, by replacing the Alpha Over node with an Add node.
Now that I see it, I realize I need to be more specific on how to add this glow effect. As just placing it there over the donuts is too much. One can’t see the donuts very clearly any more. But then again that’s something beyond the scope of this thread…

However still fits to say that I’m still curious as to why it won’t work with 1 render layer node, and only the 1st scene layer enabled as Price had it. It was the way I meant to do it on the 1st place. Anyway… So if any one wants to solve this mystery that would be great!

Well, if you look closely at what he actually has on the individual layers, his Render Layer one contains everything in his Scene Layer one, which is the ship and all it’s light-ey up bits that he adds the glow effect to. The other two layers are dealt with later on, which only contain the flame effect and the exhaust trails.
If you look a bit further on at https://youtu.be/06A_l95vJWw?t=1h2m6s, that’s where he brings in the second Render Layer nodes for further magical composition involving the afterburner.