i dont get ekstra ammo when i pick it up

This should be in the Support And Discussion section.

you are giving to little to go on, hard to give an answer

you have to show what you did, a blend would help.

here is something i did from the top of my head, it might help you.

here is the blend file

are you sure thats the right blend ,its just a model of a sword.

the collision box of the player is not hitting the clip.

remove the collision sensor from the camera and put it on the player cube.

What is what you want?

This is what your implementation is doing:

I do not know why these reuqest are that much isolated. They have nearly no relationship to each other. I would request following:

There is no need to measure two different events unless you have clips that should disappear and others should not. If that is the case I would implement two different kind of clips that are treaded differently.

There are several ways to implement that:

A) let the clip do the work:

Assumption: there is only one pick up at the time (otherwise you need to count the messages)

B) let the “clip sensor” do the work
The clip sensor is the object that detects clips e.g. “Cube”.

Assumptions: all clips are treated the same.

-> why does the camera collide with anything? It should not, so it can’t measure something
-> due to the different “object types” (identified by properties) there is no guaranty you measure at the same time.

can you tell me where physics viualzation is

can you be more detailed?

2 places you can turn it on 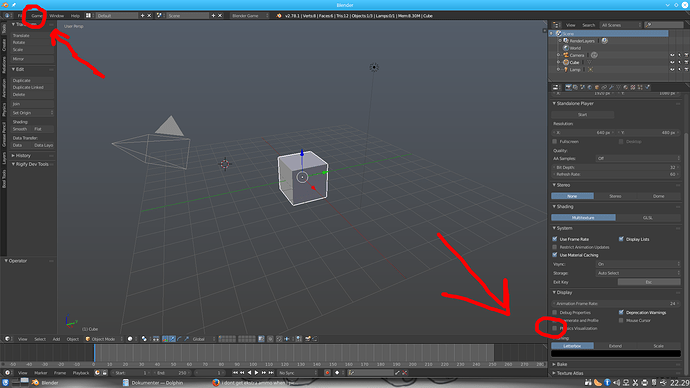 ooh thx budt he still dont get an exstra clip

As said earlier, you kill he clip, but you never add it to your counter due to measuring different events. I really doubt your camera will ever collide with anything (it has no mesh).

budt why does the clip not add and the cube disapere

clip is not equal to Clip

here i fixed your blend so it works.
http://15b.dk/blendfiles/fixed.blend

Because, the clip looks for collisions with object that have property “player” -> ends itself, but it does not do anything more (not even notify someone that this happened).

You let the Camera sense for a collision with objects that have property “Clip” -> to increase the counter.

Why do you think these two collisions happen at the same time? There is no relation between this two events.

When the player collides with Clip -> The first event triggers and let Clip end.

After that the camera has no chance to collide with a “Clip” object as the last one is gone.

This is the consequence to measure to different events, while you really want to measure a single event (either collision with “Clip” or with “player”). Indeed some rare setup can make both events happen at the same time. But not in your situation.