I don't Knode if I got these right or am I fighting it?

I am messing with Nodes and trying to reduce Caustic in Cycles as represented in this video.

I went thru and added a diffuse and Light path mix to all to get a reduction in noise. Please take a look at the grabs and see if some of the Nodes are counterproductive. I Don’t Knode if I got these fighting one another?
Thanks for any help on this.
Samples at 150 and still kinda salt and pepper… CPU due to light volume boxes in the doors 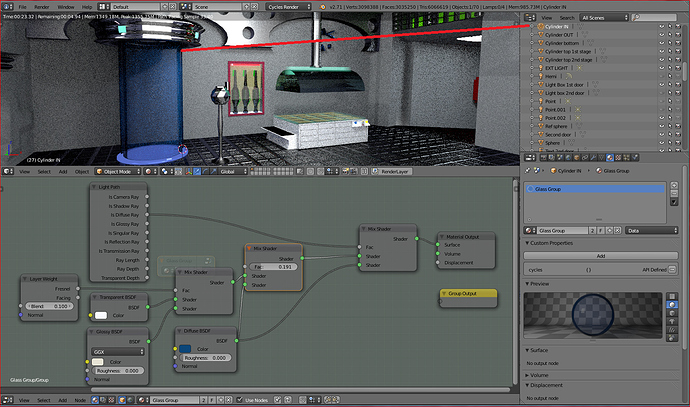 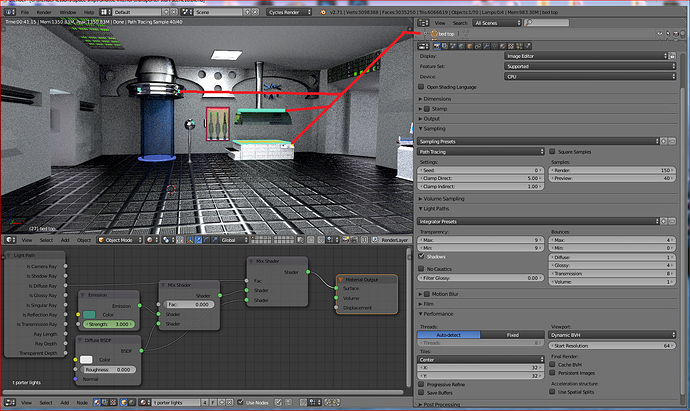 I’m terrified looking at your verts count :D.
That can be one reason why you would need to seriously increase sample count to get rid of saltn’pepper in the image. I don’t think there’s much more you could improve using node trickery in Cycles. Maybe one if you’re not using it already - make walls emit and do not show that to camera. Drop volume lights - it’s not so prominent in the image, render GPU (if Q4000 is actually faster than i7 cores; on crowded scene CPU might win the race).
Just to mention - i’d set Clamp around 3 and any sample settings at even number.
This is 1200 samples, no volumes, fake floor - baked normalmap. Clears up to more or less useable in about 600 samples. As you can see all for all dummy included - 140k verts (it’s not falling through floor if what; poor thing has no feet). 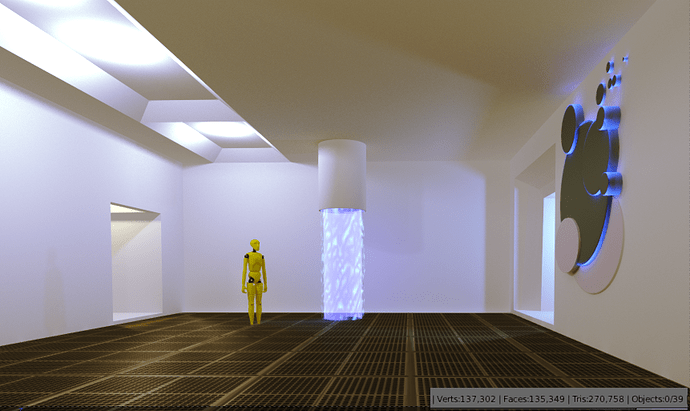 Eppo, you kill me. LOL I do not know fake floor?

In all fairness it could be counting the other layers of verts where the bridge is…Or not?

I also used reflection in boxes for volume. (that lesson you taught me) They are black in material view So I think that means I must use CPU to render. Even though it is 70% longer even with i7 compared to quadro.

When you state; “drop volume lights” do you mean get rid of, like drop a habit, or lower as in drop down?

“make walls emit and do not show that to camera.”~ So how is this done with the emiitter? What kind of ray if not a camera a light ray?

So Emitter>Mix if Light ray>Composite? maybe a screen shot of a node example, if you got one? 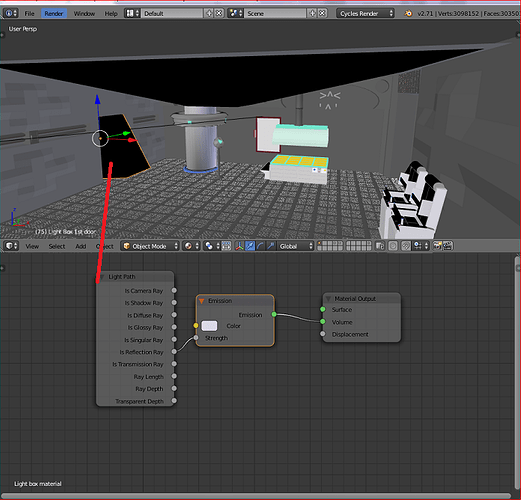 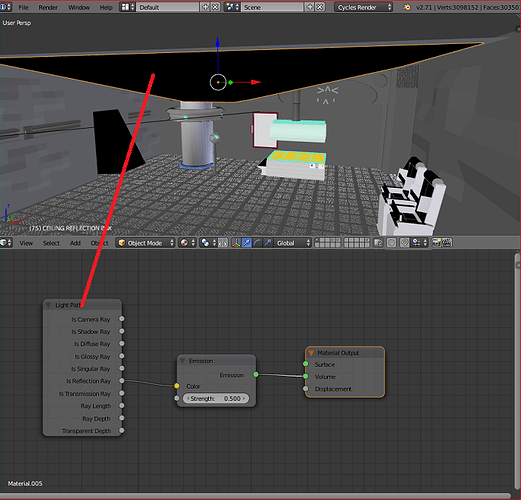 Well :), hope you’re still alive despite my efforts!
Now, if you watch this nice CGC PN tutorial… this is what i mean by “fake”. There is no 10k verts in one floor panel; all what’s left after is one simple plane - 4 vertices yet it reflects light as if it was modeled, well, almost. Tradeoff, so to speak. This was to the floor. Ofc, if you have all modeled things in one blend file, several scenes and what not it might be millions in total. Still, i suspect floor has most of it if it is modeled array.

Lights, salt and pepper. Cycles is problematic in inside shots where lights are coming from closed fixtures or have other obstacles which cover direct light paths from lamp to camera. It’s unidirectional pathtracer - light rays are coming not from the lamps but from camera instead. In order to see such covered lamp Cycles camera ray needs to hit something and by random function reflect and then hit the lamp. Mind you - random. This might not even be the first bounce but second or third when by random you hit the lamp. As a result some image pixels get the light info, others not - saltn’pepper. Cure - increase samples to get more random samples to cover all image pixels. That means time nobody’s willing to spend. If the light emitter surface is bigger it’s much more probable that such random ray will hit it - less time needed.
Here comes the cheat - instead of let cycles figure out the hard to find paths to some lamp in the corner let the walls emit and light itself - give some initial lighting level instead of pitch black and make difference between light and dark pixels less visible on the image. Sure it has it’s tradeoff - shadows might suffer a bit. You have to decide.

Volume lights are just a nicety; not really for shedding some light into the scene. Think of light rays hitting dust in a dark room, underwater environment, God rays coming from clouds.

Example of emitting walls was in the file: 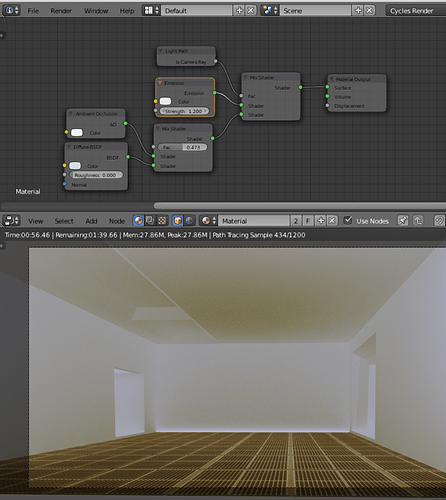 This was the “starting point” - no lights except some World coming from Camera side.

And this is with 2 Pointlights added - consider path one ray needs to travel from pointlight to the opposite, “invisible” to the lamp wall. Probability to hit inside the right corridor and return back - close to 0.
After the pointlights comes eye candy - two shaped cubes representing “light hitting the dust” - Emission connected to Volume output, CPU only combination (while there is a rumor that command line OS environment settings allow to use GPU i haven’t succeed yet).
Thus i meant “drop it” as in “forget about using this in order to get into reasonable time frames” ;). 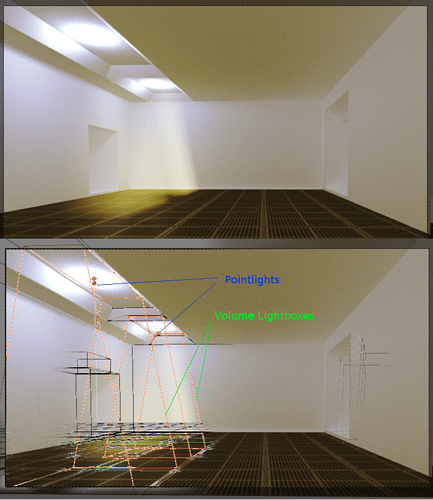 Brilliant Eppo, Thank you, I have learned so much on this one model with you and Ikari. I appreciate the time you took to illustrate and explain how and why to deal with this “Art” / Computer Science. Appreciated and grateful.