I got rid of my landline very, very soon after it became feasable to do so. Early 2000s. I dislike cell phones just about as much. Android is a decent operating system. Does the thing. I don’t know if they make Windows OS for phones, but I’m researching how to do an end-run around all of that stuff.

I don’t need a palm-sized computer in my pocket. It doesn’t do anything for me that I couldn’t do 43 times better by pulling out a tablet-sized computer. If I had a decent Surface Book, I could run Blender and draw in Photoshop and take notes and browse the web without straining my eyes and use a Bluetooth keyboard to script and so on and so forth, and it could fit in my guy-purse (heh).

Now, I can carry both a cell phone and a tablet, and for the most part that’s what I do now… I haven’t upgraded my tablet to be a really nice one that runs Blender, but it’s an Android with 4GB RAM that’s good for browsing the web and consuming media.

But if I could get rid of my cell phone entirely, I’d could take the money I spend on my phone and use it for something that makes more sense for me.

Two notes: I never call anyone unless I absolutely have to, and nobody ever calls me, except for like if I’m on the phone with tech support for something and they ask if they can call me back.

There are two problems that I can see:

Has anyone researched this sort of thing?

I’ve always disliked telephone communication in general. It’s intrusive: people always call you whenever it suits them, while I’m usually busy concentrating on work, or relaxing. Either way I don’t like to be disturbed.

You can turn off your phone, but then the thing is useless, and your conscience starts whining that your family might need to contact you in case of an emergency.

I usually prefer written communication, such as e-mail or messaging, but a lot of people are too lazy or incompetent to write a decent message, and resort to easy calling again.

I hate phones too

I use mine mostly for listening music while in public transport, or play some game. There are two things that help a lot with using it very rarely for actual calling:

For me it depends on the type of use.

I do only note-taking, photo, ebooks, and drawing on Infinte Painter. And since I am doing other stuff while awake, the phone is great for chilling while lying of the bed. Drawing with the finger on a phone screen is not ideal but is exactly what is needed to get importand doodles down and refined at a later time on the PC.

But for the tablet I would think of that is very cool as the hybrid between a laptop and a phone, only in that sense I would be interested to combine these two effects in a device. It might be a good way to increase the drawing surface but for now mobile works fine.

I’m addicted to my phone. I always have my face stuffed in the dang thing. It’s currently stuffed as I type this!

That being said, I’m more often than not near WiFi as well, and have been considering canceling my service and replacing it with Skype or Google Voice. Both offer free phone numbers (depending on your region).

I haven’t looked too deep into it as far as going ‘off the phone grid’, so I’m not sure where the limits lie. Though I did have a Google Voice Number years ago that I used to sign up for stuff. It basically acted as a telemarketing filter. Haha

I like my phone but I hate telemarketers. Regardless of precautions taken, blocker aps installed and existing law, they always find a way to bother me - via unwanted calls, unwanted SMS, etc. Scrouge of the Earth - aren’t they?
Everything else works fine - I like the ability to take photos, listen to musics and contact my friends.

I’m addicted to my phone. I always have my face stuffed in the dang thing. It’s currently stuffed as I type this!

I also like to use apps on my smartphone, and to use it for messaging. I just hate the phone calling part.

Any Skype users? I tried to set it up, and it wouldn’t proceed without a smart phone to send an activation code to. OK, but if I already have a device WTF do I need Skype for…

Thanks everyone! I feel so… like I’m among friends!

That Google Voice thing looks interesting. It doesn’t look like it’ll take the place of a static line though. For example, I just applied to refinance my car loan and the web form wasn’t going to do anything without an XXX-XXX-XXXX formatted US Phone number.

I think I’m just trying to cut out the middleman, to use a colloquial metaphor. No matter when someone tries to reach me, I’m going to be in front of a really nice computer setup in, at most, 4 or 8 hours anyway… usually much less time than that. Again, in the RARE times when I’m out at like a Renaissance Festival or at the lake or something, I don’t want to use any electronics anyway. If people are trying to contact me, they want graphic design, in which case I need to be in front of a computer to do much of anything resembling a finished product, or they want money, in which case they can go climb a tree.

I could see the point of carrying just a really nice Surface Book. Drawing? Check. Carrying a small mouse and/or keyboard for 3D stuff? Check. Document work, spreadsheet work, and so on and so forth? Gotcha covered. Need a script? By that time I’ll have finished my C# course and my Python course, so all good. Communication? Okay as long as there’s WiFi or, like I said, I’m hoping for a tablet hybrid with at least a little LTE or 5G going for it. Music, movies, books, Baldur’s Gate II… you KNOW I got that covered.

I just don’t see the point of having to carry another little screen that doesn’t do all of this stuff and that I have trouble seeing because my eyes suck and I’m getting old, just because Bob from Credit -R- Us, or Agent Harvey Killson from the Social Security Agency or Sholanda Dykes the AT&T operator needs my phone number in order to give me stuff or in order to be able to tell that I’m me.

That Google Voice thing looks interesting. It doesn’t look like it’ll take the place of a static line though. For example, I just applied to refinance my car loan and the web form wasn’t going to do anything without an XXX-XXX-XXXX formatted US Phone number.

Unless it’s changed, you do get a real, standard US phone number that is registered as a landline. You start by choosing an area code (doesn’t even have to be your real location) then you pick a number from a list. This service is (was?) completely free, so I’d check it out.

Unless it’s changed, you do get a real, standard US phone number that is registered as a landline. You start by choosing an area code (doesn’t even have to be your real location) then you pick a number from a list. This service is (was?) completely free, so I’d check it out.

You’re not wrong, but it’s not going to allow me to cut the wireless cord just yet.

Apparently, it’s a service so that when people call my Google Voice number, it gets forwarded to my cell number.

But I appreciate your reply. 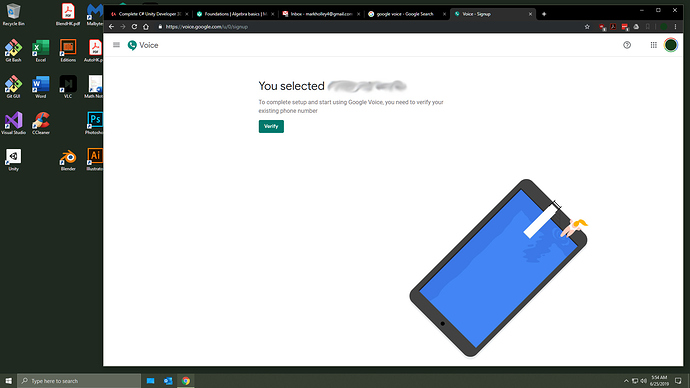 You need a number to verify your account upon sign up, yes. I forgot that bit. But beyond that point you won’t need it again. Call forwarding is an option. You can instead have calls routed to Google Hangouts, and/or Gmail. So you can receive calls/texts/voicemail directly on your tablet or computer. Hangouts would basically just be your phone app.

Haven’t used it in years, but I still get the occasional spam call on my Google Voice and it’s linked to an old landline that hasn’t been active for a decade. I’ve also received a few voicemails over the last couple years from this dude in Alaska who thinks he’s calling his uncle. Hasn’t gotten the hint and keeps calling. Haha

You need a number to verify your account upon sign up, yes. I forgot that bit. But beyond that point you won’t need it again. Call forwarding is an option. You can instead have calls routed to Google Hangouts, and/or Gmail. So you can receive calls/texts/voicemail directly on your tablet or computer. Hangouts would basically just be your phone app.

That sounds wonderful! I’ll take a gander at the options and get it routed into Gmail. Never tried Hangouts.

the age of smarhphones is running out.
paradoxically, I used the phone a lot more in the 90-2000 when it was just a mobile phone number.
I admit that I was addicted to smatphone in the first five years until 2015, then stop, so what happened with social networks also… quit quit quit this useless shit… I had things to learn, and I learned to evolve, then I realized that I was becoming socially difficult in physical relationships, and so the world around me became socially difficult in physical relationships and I decided to quit.

on internet I went back to the forums and blogs that through YouTube have mostly become visual blogs channels …
and Wiva Discourse, is a nice invention.

I also hate them with a passion! Recently i canceled my land line and now my home is so peaceful without these annoying phone marketers trying to sell you their crap!

I don’t even have a cell phone since i don’t want to be identify as just another zombie starring at a 3 inch screen!

I only have an internet connection obviously and i use my sister phone to register on some services.

Puh-leez! All the cool zombies have 6+ inch screens these days…