I’ve been working on a Metroid Prime style game for my class project (Take a look here if your curious). I’ve been working on it in class for the past couple months and so far I really like my game. I think it’s going in a good direction, I’m having fun making it, but I don’t think it could be finished in roughly 36 hours.

Depending on how the next week goes I might end up haulting the development of my Metroid game, and begin remaking 1984’s Marble Madness. Marble Madness is a game where the player has to guide a marble through six obstacle-filled courses within a certain time frame.
Here’s all six levels: 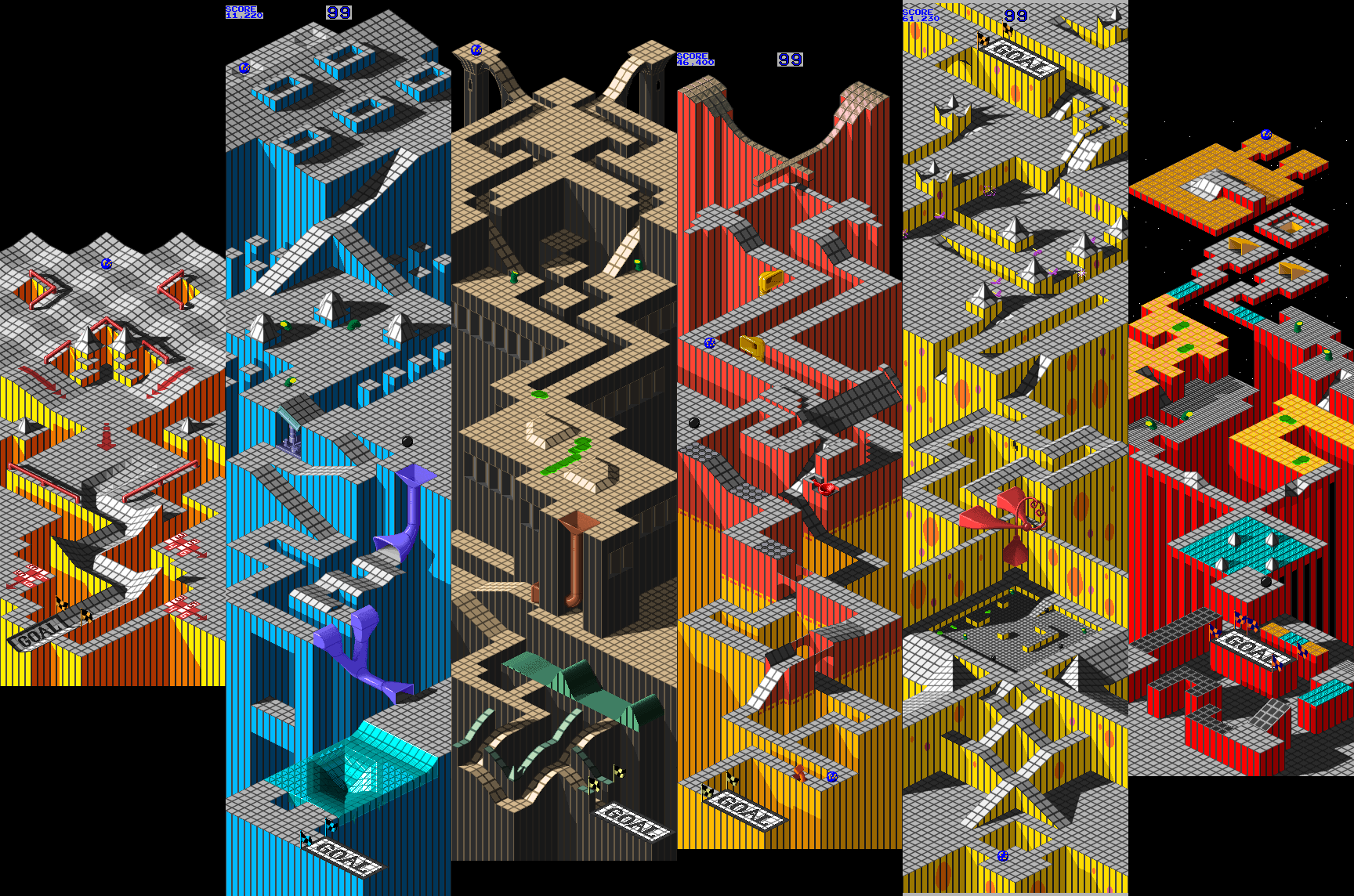 This decision is not one I’m happy to do, but is one I might have to do. Don’t get me wrong I like Marble Madness, but I love Metroid. The thing that makes me upset is more that I wan’t to make a Metroid game, but I simply don’t have the time to. Eventually I will finish my initial project but it will not be this year, nor next year. Once I run out of school days I lose access to a computer capable of running Blender 3D and I don’t know when I will be able to buy a personal computer. But, I grantee that my Metroid game will eventually be finished.
I wish I could show how thankful I am for all of the support anyone gave me (it really did help). Think of when a new Smash Bros game gets announced and how the internet goes wild, that’s how I felt about the support I got. While the decision is not final, it is most likely to happen. Again thank you all.

Looks cool. Why not just create a completely new game? They already exist for one and are probably under some copyright. As for running blender it runs on pretty much any old box. I’ve created some amazing things on an old junker.

I need to make something quick and designing a completely new game might take a while. Plus if I do make this Marble Madness game then I will create brand new level to go along with the originals. I don’t plan on making any money off of this project so if I get copyright striked I won’t be that worried, I can just re-upload it with a new name and without the classic levels. Also I can’t run Blender without a computer. I don’t own a computer, I’m still in high school, and I can’t do anything without my parents permission (my parents wont let me buy a computer).

Fair enough. Take your time and don’t forget there are plenty of art skills that are best developed with a pencil and paper, and most younger game devs move forward with the technical side and ignore the design and art skills. Best of luck!

@Sacren
If it can be of any help for u. I was in the 80’s without computer. My parents weren’t rich enough to buy me one. For that I was creating games on paper. When I was legally able to work. I ve decided to quit school to buy my own computer by myself. I m a fucking professional till 25 years now.
You are on the right way man.

your current game - what is missing?

maybe chop off half the levels and call her done?

what do you think this is? EA? some of us like to stick to the plan.

. But onto @BluePrintRandom’s question.
Let me start off with what the term metroidvania means. Metroidvania is a genre of video games known for exploring to get more abilities/ powers that let you explore even more to get even more abilities/ powers and so on, so forth. This means you need big maps that branch off in different directions but link up together in other sections, but these branches are only fully accessible by finding new abilities/ powers. This brings up the first reason my game won’t be ready in time, my map is still pretty small (and buggy), the rooms don’t interconnect because there aren’t enough rooms to interconnect, and there’s currently only a basic beam weapon and no power ups for it. Another key aspect to the rooms I need to incorporate is puzzles. Metroid Prime is well known for having a puzzle in almost every single room that use different abilities/ powers to solve. If I chop off half the rooms in my already to small of a map then it would only make my situation worse.

Here’s a map someone made for Metroid Prime: 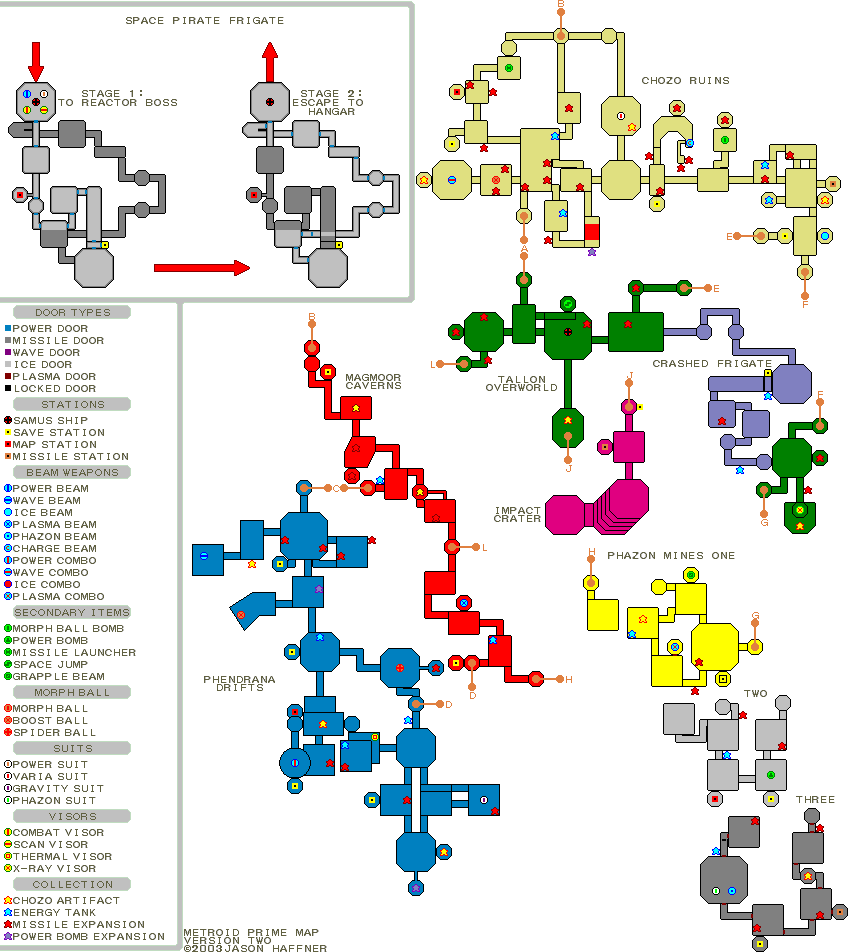 Next problem I have is the lack of enemies. I have one robot model made with no logic for it, and no animations. I need to make more enemies with unique animations for different states. While some will only crawl, others will run, aim+shoot, run+shooting, take cover, idling, see something to attack. All of them have to have hit registration for being hit and hitting the player. Different enemies do different amounts of damage which is a lot more logic to build.

There’s just to much to do in too short of a time frame. That’s why I’m deciding to make a game like Marble Madness instead. I only need a few simple enemies with little animation and logic. Only twelve levels max (compared to 30+ unique rooms, 20 not including hallways). If I announce it’s finished now it would look terrible in my eyes.

"A delayed game is eventually good , but a rushed game is forever bad. - Shigeru Miyamoto

I did a pretty bad metroid clone in under a week for the bgmc, so I know all about a rushed game.

Quick question. Before you shot the blue door, was the room behind it loaded in from the start of the game? Or did the door getting shot tell the game to load the next room?

this was all 1 large blend with very low detail.

if I were to do it again, I would use a few trim and plate style building kits, and make the levels using the same 20 or so pieces over and over + splat mapping,

I would have the objects all get saved in a grid (kdtree) and load cell’s objects as the player is near. (convert game objects meshes and move them ahead from behind) 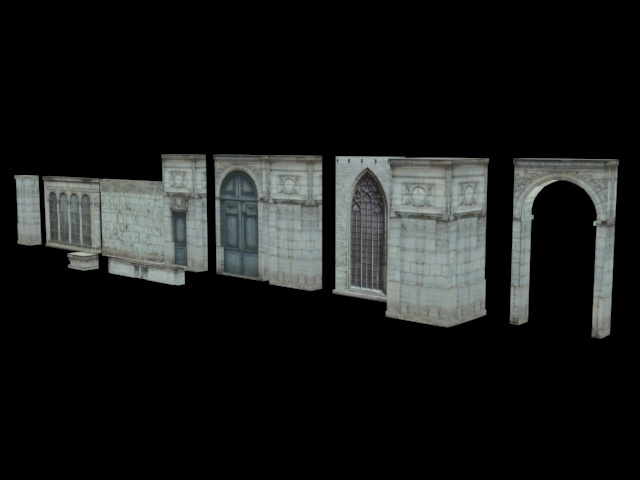 but metroid style pieces that snap together that all use the same atlas texture + splat mapping for noise/ variation.

I admit that that’s a pretty good idea, but part of the charm in the Prime series is that everything (except enemies) was hand made.
“We’ll do crazy stuff,” Keller said. “You can ask any artist here what the first ‘Prime’ was about and they’ll say cracks. All we did was put thousands of cracks everywhere. For some reason at the time I was real big into cracks and everything had to be beveled. Every crack was custom. There is not one crack that was copied around. I made them chop up everything. We chopped up every stone that was unique on the game. Every pebble.” (Todd Keller, 2007).
It seems stupid for me to make every little detail of the terrain unique, but that’s the way the Retro Studios did it and I intend to do it like that as well.
I was trying to make some sort of kdtree with empties and other layers. It seems to work well just by loading rooms with messages, I just had to make it so when you were far enough away, a room would un-load.

I am not in a position to seriously advise you, however make sure you do finish what you start.
If you think it is not worth the trouble, then by all means scrap it.

I suppose you are of young age, so you are entitled to scrap a project or two (heck, everybody has!)

Just make sure it does not become a habit.

you can totally wreck a kit piece with cracks and still batch it’s draw call,

what the kit workflow is about is everything using the same material not the mesh etc. necessarily

you can add a duplicate -> edit the crap out of it as long as it’s still using the same material, then use draw call batching later to chunk a large group of objects into 1 draw call.

Trust me, I will finish my original project. As long I have a way to get Blender 2.79 and a computer, I have access to a game engine. And once I do get a computer, I will either finish the existing one or make a less flawed version of it.
There are many reasons why that project meant a lot to me, some more personal than others. Once it is released I hope that I will have made something that is fun because if a video game isn’t enjoyable, why would I have bothered to make it. And who knows, maybe I’ll put it in my resume someday and apply to a game company.

As of right now, I’m officially going to start work on the Marble Madness project and putting aside my Metroid project. I would like to apologize to the group of people who were genuinely excited to see what would become of the game (keep in mind I will not forget about that game), and I greatly appreciate everything y’all have done for me, whether that be tips, help, or even saying it looks good. I hope you will continue to support my efforts, though I understand if you don’t.
With that out of the way, I have already started brainstorming and working on this for about 45 minutes.
Here’s the basic info you should know:

I details on the above section- 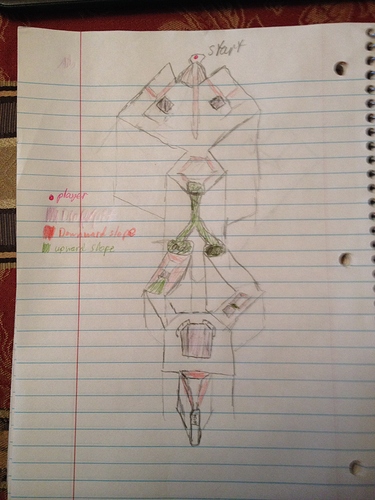 New Enemies, also self explanatory. Enemies I design that function differently from those of the original game.

Retro Levels, this is the part I’m most excited about. Don’t get this confused with the levels from the original Marble Madness, these levels will be full of references to older games (8 bit generation to 16 bit generation). For a better example a Sonic the Hedgehog themed level where the marble is replace with Sonic and the aesthetic would be Green Hill Zone. or Metroid themed level where your marble is the Morph Ball and Metroids can latch onto you and drop you making you dizzy.

Different Marbles, the player will be able to choose from predetermined marble colors, might make it so a player will have to unlock the different colors by completing certain races. I don’t know if I will allow the player to use the Retro Level Marbles, Maybe they could be unshockable variants.

Multi-player, I will try to make the game four player, but most likely it will be two player at max. This would entail a simple race against the other player with no time limit, who ever reaches the goal first will win. I might also make an arena mode if I can get four player mode to work well. All this would be is a sumo wrestling type thing where you try to get the opponents off of the arena. I would like to put power ups in this mode such as a lead weight that makes you heavier, feather that makes it so you don’t crack or get dizzy after falling off an edge, and lives.