I unzipped the startup cube..

Well usualy its the first thing you delete.
Did you ever wondered what’s inside that cube, when you startup blender ?
Well i took my favourite unzipper and you can see the result below 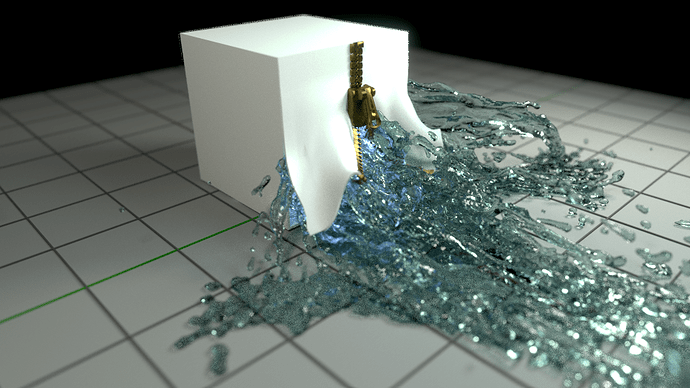 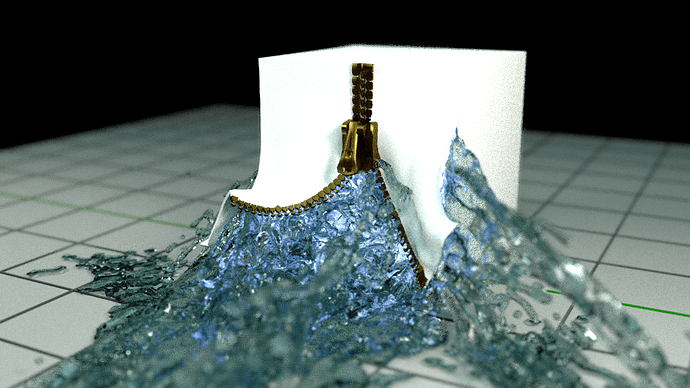 Oh and i turned the water simulation in a mesh then next the fluid emiter into a light bleu light, kinda gives a cool cold water effect. Also for the inflow i placed the Letters “W” for it, so that water that would come out of the box would be come much disturbed, and not one huge flow.

… I looked inside the cube, but mine is empty…
are you sure you haven’t downloaded Blender version with water startup cubes?

One of the most original ideas I’ve ever seen with the default cube, a very clever and very original take on what everyone sees when they open Blender.

Did you actually find a way to get the cloth and fluid simulation tools to play with each other or are the flaps hand-modeled?

Well no, but it was actually the zipper that was the most complex part of this blender build, and most of the work. There i used an array of an object made it follow a path, and the (how to call it) i created the main zipping tool itself. Next i created not the “cloth part” but a sculpted a flat field to which i did a solidify and edgesplit modifier. All these objects became Fluid obstacles.

Then i let go a a water simulation originating from the cube.
In the cube there was an inflow flat field it had 90% size of the real cube, but i put 2 letters “W” in front of it, so there wouldnt get out to much water, and it would because the obstructions be wild flowing water (not one big stream). This also allows some space for the water to move around and create a lot of drops in front outside the box.

Then from the water simulation i took the most apealing frame, btw the water resolution was 400 (quite high)
On that frame i converted the water sim to a mesh, then from the mesh using sculpting again i deleted some unwanted water.
Next what used to be the inflow i turned into a bleu light emiter (while the water is slightly green).
Also on top above the scene i created a light bleu field emiter in cycles.
Then i let it render the whole scene
Then i did some after processing in blender (defocus, contrast, gamma correction).

Oh and i created the floor also its not a texture, but an array of stretched tiny cubes (to get nicer detail).