Hello everyone…
Before I start talking about my work please note that this is my first “real” high-poly human model:D , so be easy on me :o
Anyways, this is the concept sketch ( done in photoshop):

It’s not done yet, and yes I will add his ears! What do you guys think of this work so far?
-Jassar

Apart from the obvious exagerations done in the name of art, I think it looks pretty good. A couple things about his neck, though. The… uh… things. Tendons. Are suppose to come down in more of a V shape, where the collar bone stems out on both sides.

Thanks BlackBoe, I will fix the neck, and I will make his shoulders a bit smaller…lol.
Cheers!

Nothing wrong with broad shoulders.

Ok, I gave him ears ( it’s the first time I ever model ears

), and made a few fixes to the neck…
modeling is almost done, but the real challenge is still ahead…Texturing this guy ( half ice half fire

)…I’ll use the node system.
-Jassar 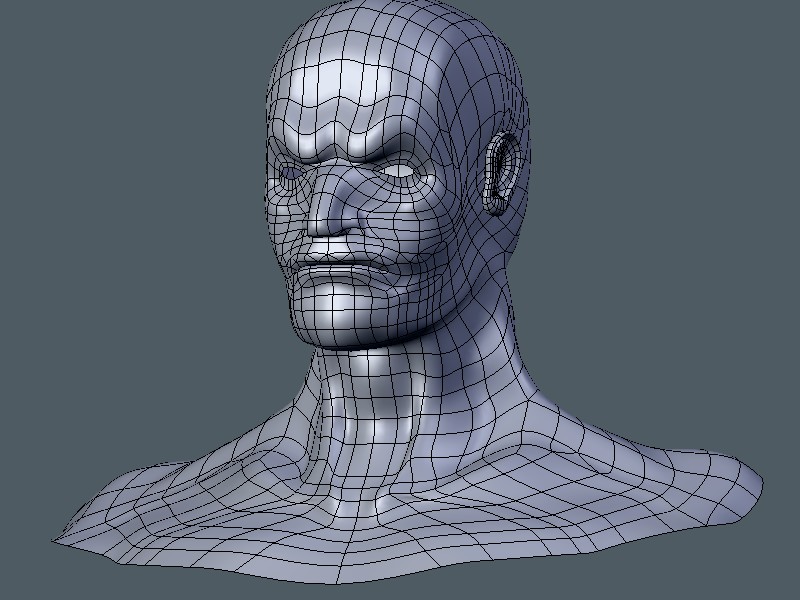 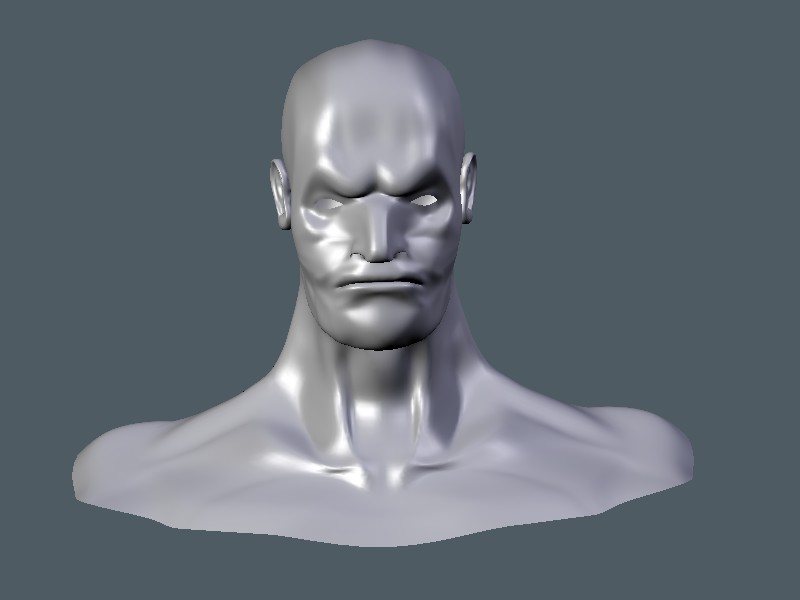 wow this is awseome.Your face modelling is unique because i have never senn modelling like that!you should make a tutorial!

I think that you need to pay closer attention to ur edge loops. That is a model with a lot of detail in it, however, I think that you were putting too much detail in it too soon. Unless you had rehearsed this model beforehand and/or are just a really really good modeler (I mean professional) you should keep the detail low in the early stages of the model and focus more on getting a general representation of the shapes, THEN later on go back and add the funky detailing.

But becasue your mouth loops will need a lot of reorganization if you want it to deform at its best. Also, I think you could get by with a lot less polygons in the head portion. The body looks very nice - but I’m not an expert so BEWARE of comment above =)

I have to congratulate you on an aggressive modeling job - but remember, until you master your polyloops - you’re ultimately pissing in the wind - because you’re not going to be able to do much with it other than look at it. - Also, your work will take longer and generally be clumbsier. This is advice I got from watching a professional model in a video tutorial.

Keep it simple at start, watch the edge loops and keep them as clean as possible, add specific detail AFTER you’re pretty confident that your edgeloops are done correctly.

Yeah I think your pretty good - I like the model =)

wooks good, except the nose is too wide

MagicMyshu, I totally agree with you man! but this model is not for animation…also don’t forget that it’s my first try at high poly human modelling:cool:
Keep the crits coming because I’m really learning from you guys!
Cheers!

If you are in for a cool look on him he shouldn’t pout with his lips that much, it is a common mistake to make “kissing lips”. Try to pull the lips back a bit.

To be more precise about your mouth loops problem. You should avoid triangulated polys in all areas that are not flat. Which in this case is pretty much everything.

A good starter though,

Ok, I fixed the kissing lips

.
Here’s what I learned from modeling this dude: watch out for those damn edge loops! even if the model is not for animation>>> my bad loops made the UV texturing a nightmare :eek: …well, we learn our lesson by trying right?
Anyways, here’s the final model, and a couple of textured renders ( a basic color render and an AO render ), I’m not sure if I will make the smoke and fire with Blender…any ideas? 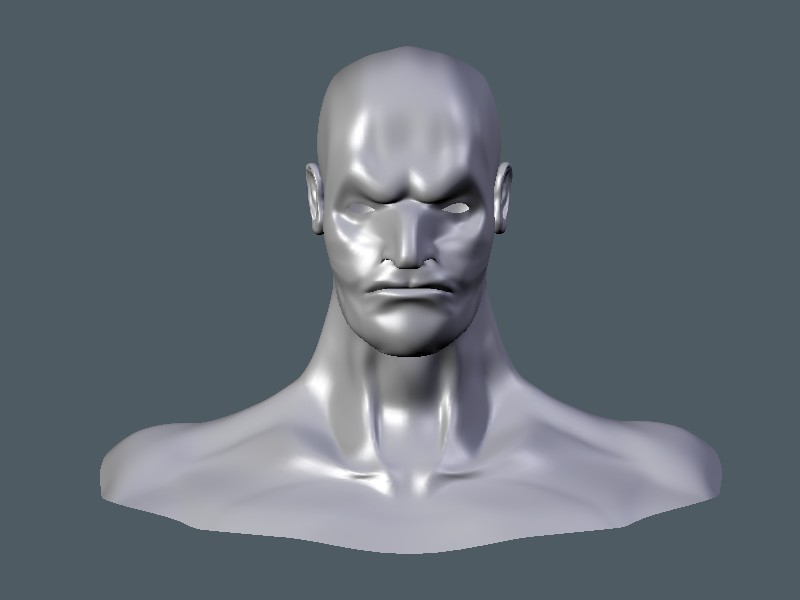 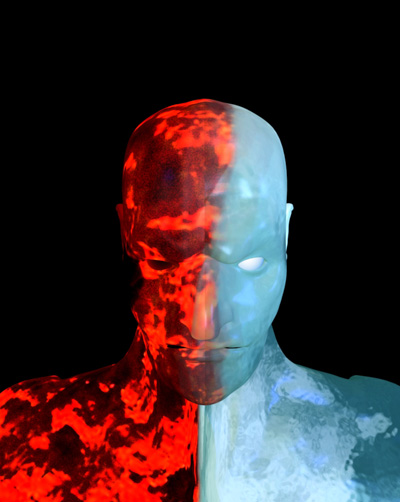 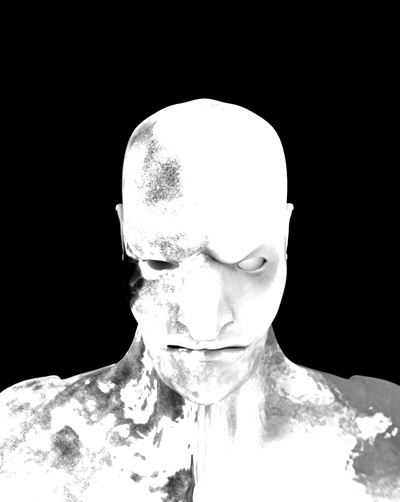 The ice side looks good, the fire side looks a little woogy, though. Too… red. There should be a higher range of colours(orange, at least, if not a tiny bit of white), and it should fade to plain rock before hitting the ice. So far it’s looking pr007y g00d, though.

Smoke should be possible with halos- though it won’t look good. I believe I saw an excellent smoke and fire tutorial on Blender Nation a week or two ago…

I found that tutorial, it’s very nice and I hope it works. But It seems I’ll use Photoshop alote…
Cheers!

Yup, the halo smoke was not a good idea ( my laptop can’t handle it :mad: ) so Photoshop is my final option now!
Now all what this guy needs is fire! 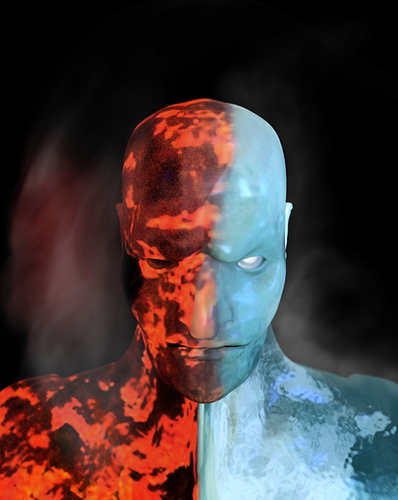 Ok, fire is now added , man it was hard to make realistic fire! I made it by hand then I inserted it to the image ( all in Photoshop ). Please tell me if anything looks wrong or funny…I want to finish this image ASAP. 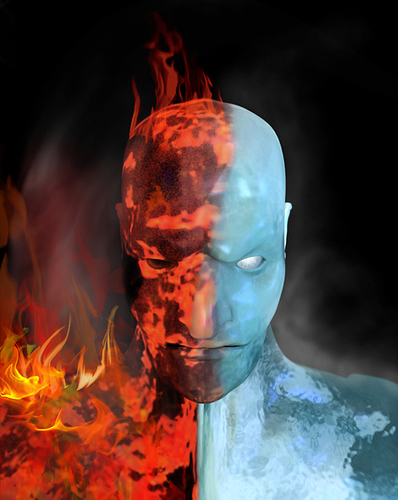 Hey, I hope you kept that file as a photoshop image, cause ocne again I’m going to mention colour spectrum. See how the fire is red>orange>bleached yellow? Well, for that reason, it doesn’t blend in with your guy. The fire looks good, keep it the way it is, but the guy’s ‘ember’ skin should–if not go in to bleached yellow, I understand it’s not burning so there’s less energy expelled than from the flames–at least approach a ruddy orange, just to make it look more energetic than the ‘black to red gradient’ look it has right now.

It’ll be really easy, in the colour ramp settings for the coal texture, just add another colour level, a sortof burnt orange, then render it and slip it into your photoshop file, under the flames.

wow cool :), But two little things… 1. I think the transilation from fire guy to ice guy could look more awsome than it does now, maybe some lightning or somthing ;).
2. Somthing about the eyes, i don’t know, but I don’t like 'em…

but keep it up!