his retopo bit on the head would have been massacred with just two lines of gpencil and using the bsurfaces but of course he’s taking his time talking and explaining. i have watched all retopo softwares in youtube and believe blender to be the fastest, with a little python know how you can bundle inherent commands to in a single button to save time.

shrinkwrap in sculpt mode can be active by going to options, by the way shrinkwrap update works even in sculpt mode, thats why the polysculpt button is there so you can grab and smooth the mesh and then activating shrinkwrap update to conform the mesh to the sculpt surface again. the disadvantage of using an active shrinkwrap in sculpt mode is that what you are seeing is a projected result of the modifier not the actual placement of the vertices in “real” space. that is why some heavily distorted areas while they may look fine in an active SW one tweak of a vertex and it may cause heavy disturbance of vertex positions in its vicinity. one of the reasons why i made the macro command.

with the constant progress of the Contour tools, and if its fully matured and released along with the development of the GSOC 2014 quad remesh (autoretopology), most of these other retop software would cease to matter, that is of course if your mainly blender.

we would be offered with a much more stable workflow = dyntopology for prototyping, autopo for continued sculpting in multires and finally contours for production topology.

Yes, Blender is the best choice for retopo, I have a topogun licence, but I prefer Blender.

I miss two things from topogun, one, the abylity to create faces like in the video at 1m51 and 2, the ability to relax the mesh in sculpt mod.

I have made a really dense retopo in topogun for a character and the relax tool in sculpt mod was perfect.

It’s why I ask for a schrinkwrap in sculpt mod.

Python scripting is indeed really powerfull and I love that, your addon is really great and I won a lot of time with it

@pitiwazou
the F2 addons is much faster and the behavior is similar but much faster…:yes:

Sorry but no, you have to select a vertice, press F, select the new vertice and place it where you want.
So, it’s not faster than clic and grab

The not-yet-done “polystrip” functionality of the Contour tool should provide a way to give a stroke and have such stroke turn into faces :

Gstretch (from Looptools) currently turn a grease pencil stroke into vertices (you can tweak how much, you can assign a key shortcut to the gstrecth button to make workflow faster, hold D and make stroke, press key, etc… ) , i imagine with tweaks instead of vertices it could create faces.
Though i know next to nothing in coding.

@pitiwazou: the F2 script has auto-grab function for the newly generated vertice. you can i think increase the grab threshold when you click for a vert in the user preferences.

i will create a vid of using gstretch and bsurfaces to create loops of vertices, offset them to create faces, also you can use bsurf to create cylinders for arms and legs, thats why the shrinkwrap update button is there

@pitiwazou: the F2 script has auto-grab function for the newly generated vertice. you can i think increase the grab threshold when you click for a vert in the user preferences.

i will create a vid of using gstretch and bsurfaces to create loops of vertices, offset them to create faces, also you can use bsurf to create cylinders for arms and legs, thats why the shrinkwrap update button is there

Hooo,I dind’t know that, very good, exactly what I wanted ^^
I Love blender ^^

hi, i have a problem, i lost the link between my base mesh, and the retopo mesh, so the shrinkwrap doesn’t anymore ! How to relink it please ? Thx

select the sculpt then the retopo mesh again and hit shrinkwrap update, that will create the link

some tweaking and an update, autoapply on/off, snap symmetry now works as long as you already have a center edgeloop present in the area of the mesh, now has choice between wrapping methods, offset and took away the resurfacing tools and put this to retopology tab

and here’s a little demo using it in conjunction with bsurf, gstretch and other native blender tools.

Thx for your hard work

I think, it will be great to have the possibility to make a shrinkwrap update on a selection.
I work with scans and sometimes, I can not use the Shrinkwrap update because I put some wertex out of the mesh to finalise some parts.
Have a Shrinkwrap to a selection will be really great ^^ 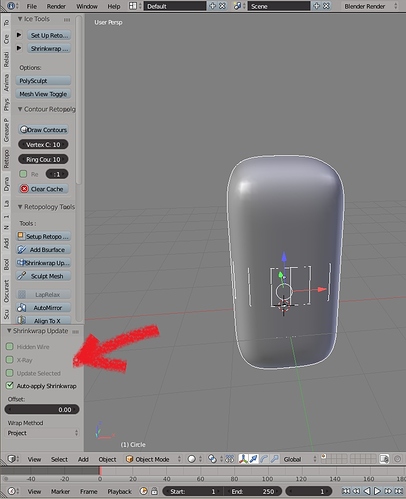 Little bug when applying shrinkwrap udate, it does not keep the hidden and xray toggle.

Okay now how do i download the python file on pasteall.org??? All I see is code but no way to save it.