I am working on a 3D logo design, and since I know nothing about 3D programs or making 3D, I decided it would be a great learning experience to try and do it myself. It seems to me that it should be a very simple task, but I can’t get it to work… it took me just over 15 minutes to figure out how to type text into a scene, and another 5 or so to figure out how to import a font.

I have gone through several tutorials, but none seemed to cover the issues I have encountered.

The logo is meant to be 3 ‘M’ s, arranged as if on a triangle - i.e. each ‘M’ is rotated 120 degrees and touching the other two on the edges. I don’t know if that is very comprehensible, so I am attaching a quick and dirt image done in photoshop in 2D.

My first problem is simply in rotating and aligning the 3 characters so that they are in the right position and at the right angle.

Next, I don’t want the M’s to be flat, but to come together as a single solid object, as if an extruded triangle had some bits carved out of its faces and top and bottom to make this figure. In fact, I thought about trying to do it that way, but got myself so lost that I gave up.

The font I used in photoshop is copperplate gothic, because it has serif characters (extra little danglies on the top and bottom), and because the left and right half of the inside of the M are the same size - most have the left side thicker and/or longer than the right.

I would appreciate any and all help provided; anything from some basic pointers to showing me a tutorial, to step by step directions.

I’m sure there are many ways to do this - I gave it a quick try with a lattice applied to two of the Ms.: 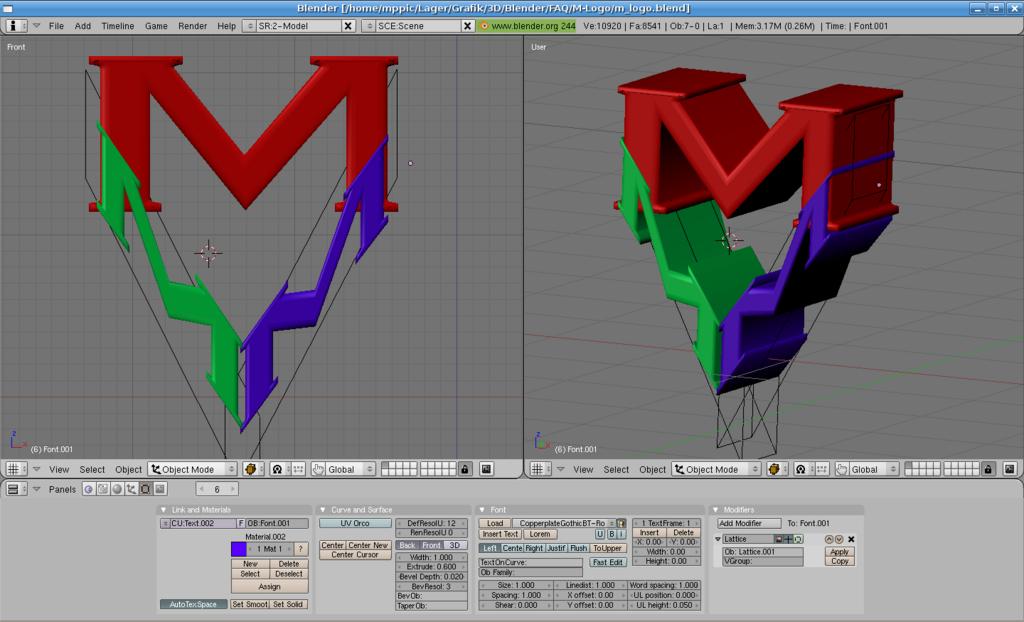 Note the extrude and bevel settings, and the lattice modifier. Details on this can be found in the blender online documentation.

Here’s a .blend to get you started, hope it helps!

Thanks a ton for the help, but I fear my 2D image misled you into what my mind’s eye is envisioning. Perhaps it is because I tried to use perspective and make it appear 3D, and am just bad at that.

Here’s a better way (maybe) to envision it. Take a sheet of paper and fold it in thirds, so from the top-down you see a triangle, but from the front you see a flat surface (or a corner and 2 angled surfaces). Now, on each side, draw an ‘M’ so that it fills the paper, and each ‘M’ touches at the corners.

Now, make that a 3D digital design which can be seen from an isometric overhead view, and hopefully spun in an animation.

That’s what I am going for. 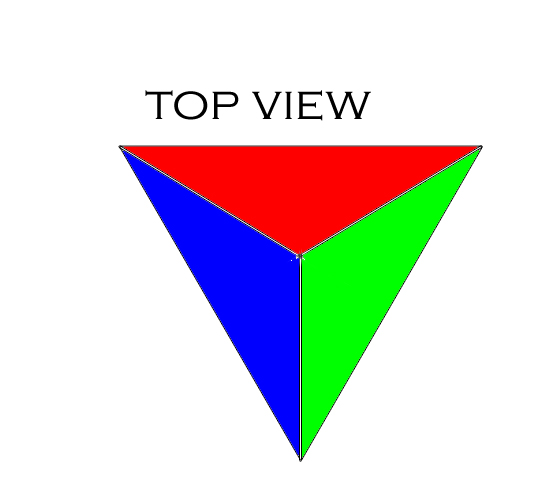 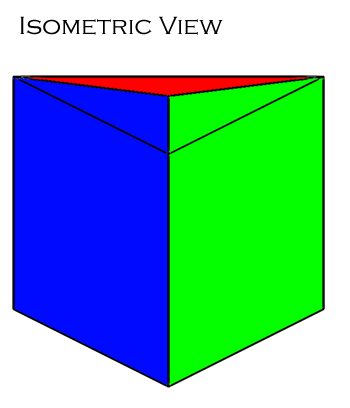 To do this, add a text M. Copy it twice in top view and rotate one copy 60 degrees and the other copy -60 degrees. Go to front view with NUM1 button and press Shift-Alt-NUM0 to position your camera directly in front of the logo. Go to the camera edit buttons and select Orthographic and adjust the scale so that you have things the right size. Move the camera upwards pressing G key and Z key and rotate it downwards by pressing R key and XX. Make materials of the appropriate colors and make sure they’re shadeless. Set the background color to white. Let me know if you want to see the .blend file.

After reading your initial post, it seems that this isn’t actually what you want at all, but I’m not sure I understand what you do want.

First of all: some setup. Split your view and create an outliner view on one side.

Go to front view (numpad 1), press space on your 3d view, add a text object, type M, and press tab to get out of edit mode. Move it to the center of the grid on the X/Y axis, but don’t move it’s Z axis. In other words, don’t move it up or down; keep the bottom of the letter on the grid “ground”.

Convert the M to a mesh by pressing Alt-C.

Simplify the font: you’ll probably find that your M is too complex. For example, the bottom middle part of the M (inverted V tip) is two vertices with a line rather than a simple point, on my system. This would make later stages much harder. Simplify your M by selecting those two vertices in edit mode (tab, then select the vertices with right-mouse-button and shift-right-mouse-button), pressing w, selecting merge, then selecting “at center”.

Ideally, this will Give you an M with 12 vertices: Two at the top of each “pillar”, two at the bottom of each pillar, two in the middle, and one at each side, where the “V” and the pillars meet on the bottom edge of the V. Next, you’ll need to add faces. You should have 6 faces: two for the pillars (a quad and a tri), and two quads in the V. Press tab when done.

Creating more Ms: Go to top view, right-click on your M, and make two duplicates by pressing D and then tab twice. Note that they’re all on top of each other, and you can’t see them, but never mind that; they’ll show up in your outliner.

If you middle-click and drag your 3d view now, so it’s just up and to the left or right of your model, you should see that you’ve got three Ms, all in the same spot, but rotated.

Move the Ms to the right places using g, and the x/y buttons to limit movement to one axis. Move two out to the left and right (using g followed by x, followed by mouse movement, and then a left click or space). Move the other down, by g + x, and the other steps.

Now, you’re almost done. Press tab to get into edit mode. You’ll probably be able to see that, in each place where your Ms meet, there is more than one vertex. Don’t worry. Right-click one, then hold shift, and right-click the other. Press w->merge->at center, as before to simplify the model, linking the two Ms at that point. You’ll need to do this six times, for top and bottom of each M’s meeting edges (the three corners of your logo’s triangle).

Select the three top vertices of one of the corner pillars. They should form a small triangle. Press f, to make a solid face. Now, select the two inside vertices of that triangle, and follow the edges down the “V” of the Ms on two sides, adding the next two vertices down to your selection. These should form a quad. Press f to make a solid face. If you do that for the other two sides, the top of your logo will be complete, except for a triangle missing in the center. Just select the vertices that make up the triangle, and press f.

Now, rotate your view, so you can see underneath. You’ll need to fill in the faces the same way, at the bottom of the pillars, on their inside edges, and then three quads for the underside of “V” parts’ slopes, and a tri their base.

If you want to make it look nicer, try adding a subsurf modifier (this will make it look horrible initially) then bevelling all of the outside faces on the model, as well as the triangles at the base of the slope, top and bottom.

Oh, you wanted copperplate gothic. Missed that earlier. I’d suggest doing it with basic arial or something first, simplifying even that as described above, and then once you’re totally happy with that, try starting over with the copperplate gothic font. save often, with a few different intermediate files, so you can go back to a known-good copy if you mess up. Note that it’s often hard to tell you’ve messed up when modelling, until the last stages of adding faces, or subsurfacing.

Thanks for the guide, I think I have it! Now I just need to go through and do it 5 or 10 more times to actually make it look good, and then go through tutorials on textures and animations so I can make it spin in place and such!

Also, one question; when I was duplicating and spinning, it was rotating around the left edge (or, several pixels of blank space to the side of the left edge), and I had a fun time lining things up; even when I got them as close as I could, there was some inconsistency and it doesn’t quite blend perfectly - close enough that no one will notice I am sure, but is there any way to have two objects snap together at the edges, or to select vertices on two objects and have them to be snapped into place? Any other similar way of making sure those two vertices end up in the exact same position so when I merge the objects into one, they are perfectly aligned?