If i am using mylti EXR layer format i will have to render twice the same long time?

Hi i decided to use Multi EXR format in order to have more control over my final composite i will need to use z passes to define where the smoke and fire is during my animation. And i am wondering after i render it in myltiEXR and than combine them together and do some tweaking i will have to render it again obviously and it will take as much long as in the first time or it will be as fast as in case when you render in Video Editor?

So if you are doing 3D tweaks, you will need to render it again

If you are doing comp tweaks to the smoke & fire… then it will be faster as it doesnt have to do the 3D rendering part again… best way to do this is to setup your comp is a totally separate file to keep it clean and straight forward.

It WILL take longer to read then a normal render as it is a larger filesize and it will take longer to save… its whether those comp tweaks are common for you over 3d tweaks.

Thank you. No 3d just compositing planning to do once it rendered. But i need advise. Since in Blender impossible to have multiple smoke domains to work without lugs and issues i separated smoke domains on different layers (but they are still doesnt work as expected (smoke and fire goes smoothly and then exploding from time to time). So i decided to use different multi EXR for each domain layer. I have two domains. So first i will render my first layer as Multi EXR (On that layer my main image layer combined with smoke domain layer only) and on second layer i have only second smoke domain. So is it possible to render at first first layer as Multi EXR and than my second layer (where only one smoke domain is) as Multi EXR and then finally combine tgose two Multi EXR files together in compositor where i will need basically to tweak only the Z pass of first layer where the image is to define positions of smoke in 3d space. So i will need to combine two MultiEXR files and get them work. Possible?

Hi,
Bartek Skorupa made great videos on youtube about your subject, if it may help:
in 'Compositing Cycles Render Passes in Blender ’ he talks about render layer and EXR files
in ‘Creating Mist in Blender and Cycles with Z Depth’ he creates a ‘Z’ pass based on the distance to the camera, because of normal problem of aliasing with Z-pass
I don’t know if the ‘Z’ pass solution works with volume ‘objects’ (smoke,…)

Z pass will not help very much with semitransparent elements like smoke. You will have a hard time getting two overlapping separately rendered smoke domains to look similar to what you get when rendered together.

There is only one alpha value and one Z value for each pixel. But smoke can be semitransparent and it covers whatever is inside the smoke domain (object, other smoke domain, whatever) proportionate to its position inside the smoke. But with only one alpha and z value you have no means to deduce how deep the smoke puff is and how is the density distributed. And for these reasons you can not mix intersecting semitransparent elements realistically unless you use deep comp or do some other depth slicing technique.

i watched all of his compositing series. But in this particular case there are nothing similar and he mostly concentrates on a blender internal and those tuts are old, a lot changed since that time.

No instead of using z pass of the smoke itself i am using the z pass of the image layer. So in this way it seems working to me. So i managed to move my fire further down inside of the tunnel/

As you can see on my screenshot - i selected the z pass so you can see it better which helped me to move my fire further inside to that box in this tunnel and even put it so that it looks like fire comes from under that box. Also behind the fire you barely can see my character who jumped back when explosion happened

Also as you can see second fire has not been added yet. Second fire will be streaming from the leg of the flying away character

PROBLEM OF DOWNLOADING FILES ON BLENDERARTIST (ALL THE TIME DOWNLOAD FAILES - FOR THE PAST RECENT TWO WEEKS. So have to use pasteall org - http://www.pasteall.org/pic/show.php?id=104300

OK i found thread which explains to me how to output two different EXR files - http://blender.stackexchange.com/questions/53300/combining-exr-files

But it doesnt explain how to combine them together and only then output them and render( WILL I HAVE TO USE ADD NODE TO COMBINE THEM? Also i am wondering if one EXR file will be able to read passes of another one or its only each one reads passes of their own?

If you whould carefully read my posts you will see that i already posted same link. And said that it explains how to output this layers but not to join together and then output

Guys i rendered a few frames (15) in EXR format and nothing works as expected. First of all if i switch image sequence node to combine i see just everything black. Second if i switch to other layers - only one of them rendered (where the image is - but it rendered differently it with different lighting for some reason (too overexposed)- lighting not the same as if rendered in png. Third - smoke domain layers are empty completely. But maybe i do something wrong. Maybe its not enough just to plug it in viewer node and see. What i shall do then& 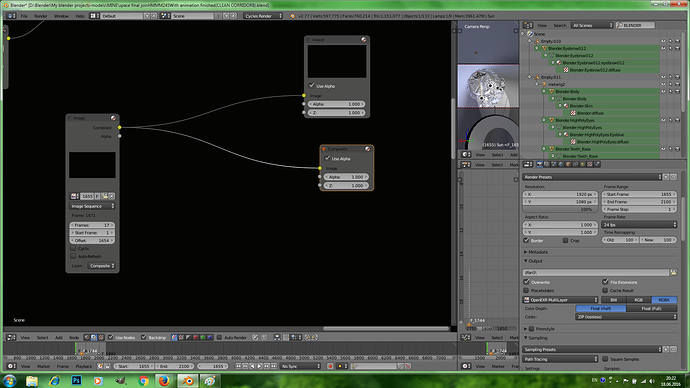 Oups, sorry!
I think you just have to replace inputs from render layer to files.
However you may have to do it in a different scene.

As you can see from screenshot i dont have render layer but i have image sequence node with sequence of exr files. And i have two outputs combine and alpha. Where to plug combine to see result.

So far it works. But will try to find out why main layer is overexposed.

So you was right when said that “I think you just have to replace inputs from render layer to files.” . But i didnt get you at that moment because you didnt expand on that. Yes now i see what you meant. I had to go to my blend file where my scene is and unplug all of the render layers and put all of the noodles from them into my new sequencers nodes. And to choose in the area below of each sequence node the layer which represented those unneeded anymore render layers

beautiful image!
I just discoverd that you can use ‘Cache result’ option (in render tab, output section): it generates automatically a multilayers EXR file in your tmp directory, that you can reuse for compositing as input file (* number of layers)
However i don’t know if it’s the correct usage and the name of the file may change when you reopen blender.
EDIT: you have to do this compositing in another scene from the same .blend so as not to rerender the full scene each time.

Thanks dude, but it’s not the image, it’s going to be long animation. Actually about 10 minutes long animation movie about space.