I am doing a little model and I have a question I have not been able to solve on the blender wiki.

I have an Ik chain and a deformer bones chain. The IK chain controls the deforming bones, and those deform ones have contraints (copy loc, copy rot) and copy the movements of the controlers(ikchain).

My question is: Is it possible to use bones for controlling in an ik chain or should I use 3 chains: 1 chain of bones for deforming, 1 chain for controllers, and 1 for IK.

Thanks, i’ve watched the video, but it doesn’t tell about the controls

I understand pretty well all the ik chains in the neck and tail (now could be done with stretch to and only a few bones :D) and all the part in the feet, but he doesnt cover how its constructed or I cant see the controls part in the video. thanks for taking your time.

here is an image, you can see, the selected bone in the image is a control bone. I dont want the upper-arm bone to rotate so much, but even ik limits(legacy) doesn´t work. thats why I think it interferes with the IK. 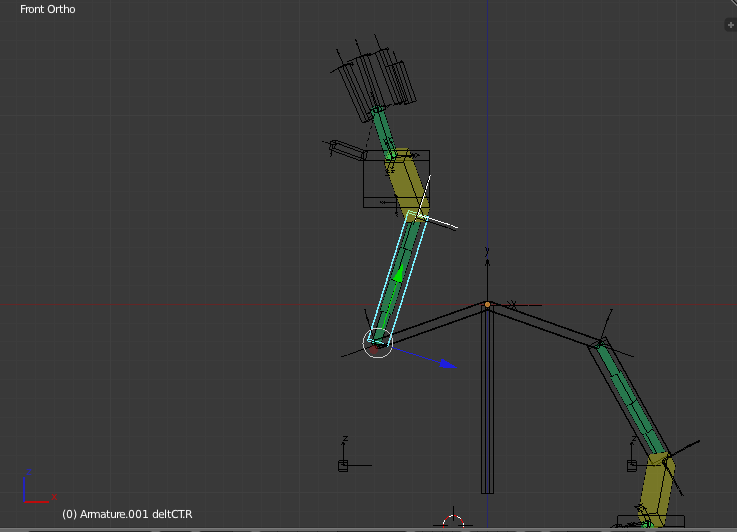 here is the blend:

I’m not understanding what you mean, might be a language/terminology problem. In the picture and in the example file, the bone high lighted can’t really be a control bone. It is part of the ik chain, and can’t control anything. By chain, I mean bones that are connected together and under control of the ik constraint. In your case, you set the ik chain length to 2, so you have 2 bones in that chain, neither of them can be controlled because they are controlled by the ik constraint. Your control bones are the hand and the polearm bones.

I think of a chain of bones as being a series of bones that are connected in some way. Either they have child/parent relationships and are connected (so the chain would end when there is no connected child/parent), or there is some other way that separates the bones (for example, you have 4 bones that are each parented to the next bone and all but the last one has inherit rotation set on them - then the chain would end where the inherit rotation of bones ends). So this is why I’m confused by this:

My question is: Is it possible to use bones for controlling in an ik chain or should I use 3 chains: 1 chain of bones for deforming, 1 chain for controllers, and 1 for IK.

because the controller bones wouldn’t make a chain.

Anyhow, in the example picture, you don’t want the high lighted bone to be rotated that far, so move the polearm bone forward and down and it shouldn’t rotate that high. I really don’t have good luck at limiting the rotation of bones in ik chain, usually it seams that if you limit rotation on one axis, the bone will flip and rotate on the other 2 axis to achieve pretty much the same position.

thanks revolt_randy, very kind from your part.

Yes i am not native english speaker but you understood my problem quite well. Ive seen rigs where there is an ik chain and there are no control bones(External to the ik) in the chain… just the the ik chain with the ik bone(with deform active) and its target.

I thought you could put copy rot and loc constraints from control bones being part of an IK chain and copy those transformations to the deforming bones, but it looks like you cant do that beause it messes up with the ik contraint calculations. I will have to see another way.

My problem is exactly what you said about flipping bones when you rotate, I will try to limit the chainlenght and leave the ik strictly as an ikchain, no control bones and just the ik and its target.

pd:ok, I think i understand what you said, when I said chain I mean a group of bones which are connected in someway.

I will try your sugestion with the pole. thanks.

Looking at your file… I think you have a Pretty good Rigg setup… looks like your on the right track… I would parent the polearm targets to the handCT bones… That way when you move the handCT the Target moves with it… The kind of Rigg setup you have Constructed is designed such that… You only move the handCT bone in Location and Rotation… and then place the elbow by moving the Polearm Target bone… ‘afterwards’… you never touch the armCT,delt.R,delt.R bones… (in fact you probably want to hide those during normal animation… Also I would Parent the armCT bone to the clavi bone… such that when you have moved the Arm into a position like what you have pictured above you can also rotate the clavi bone up a little bit to make that movement look more natural…

here is an image, you can see, the selected bone in the image is a control bone.

here is an image, you can see, the selected bone in the image is a control bone.