Hello. I haven’t been here in a while… I’ve always been working with Blender though.

At present I’m working on an animation. It involves two simple polygon men fighting each other. However, I found it rather hard to animate their leg movements without IK. So I arranged a very simple IK rig that seemed to keep their feet in place.

Voila! IK. However, I’m having some interesting problems when I try to make the simple character face in another direction by rotating his torso and feet IK targets at the same time…

His feet slide off to the side! The IK targets don’t want to stay put. I’m not sure what to do… I tried and abandoned the idea of parenting the IK foot targets to the torso, because that sort of defeats their purpose (it’s supposed to make the feet stick to the floor when he crouches)… I tried to give them a Z axis rotation constraint so they’d follow the torso when it rotated, but it resulted in some very zippy, erratic rotations and sometimes I wanted to animate the characters so that they’d rotate their torsos without the feet following.

Um… in addition to this minor problem, does anyone know anywhere where I can find some very thorough explanations for rigging? Rigging theory, perhaps? I know about constraints and hierarchies and stuff, I just spent some times looking at some more advanced rigs (like Ludwig) and I hadn’t the slightest clue how that was made. Thanks a lot.

What you need to do is to create a separate bone to parent the feet and torso bones to. You then rotate this bone if you want to change the direction of the character.

Also, take a look at BlenderWiki for tutorials and info about rigging.

The separate bone Aligorith mentions is often called the root bone. It is essentially the parent of the armarture structure. Everything is ultimately parented to the root bone either directly or through other bone parents.

Here’s my Super Wu-Man rig as a simple example (there are some hidden bones so don’t worry about the fact he appears to have to lower leg bones). You can see that the IK targets, eye target bone and torso (lower spine) bone are parented to the root bone.

In this case the root bone is below the rig but I think the root bone could go wherever you find it convenient (I think the Elephants Dream characters had their root bones set-up to display as a disc with arrows on which the character stands). 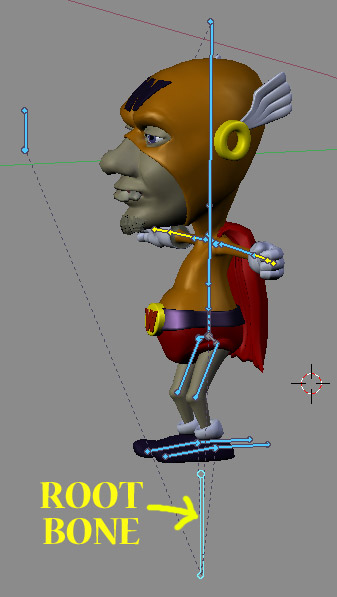 Aha! Yes. I noticed root bones in the ludwig and “skinny guy” rigs. I did try this technique for the character shown above, but I dismissed it because I ran into awkward situations where the character would move away from the root bone and I’d have to make the root spatially “catch up” with him… but then since his body and everything is parented to the root, it caused some weird situations.

I’m not so sure about this… I wanted IK constrained feet so that their feet would remain in place when I moved the upper body around, but if his location in space is dictated by a bone that’s higher up on the hierarchy - to the effect of moving the IK targets along with it - then the feet will go all slippy slidey again.