Hi everybody, I modeled the core of a robot wrist joint inspired by LIMS2-Ambidex robot
Here a turntable of my model

Now I’m trying to rig it for animation but I tried multiple approaches without being able to solve it…can anyone please help me? Thank you so much 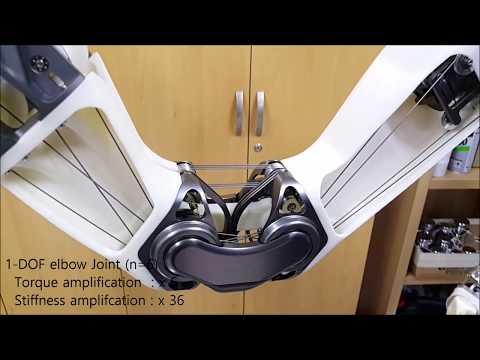 Here you can see my inspiration in action

Late to reply but I decided to have a go at it. The end result at least looks convincing, but there are a few assumptions. Have a look in test Arm.blend (961.2 KB)


Pay extra attention to bone Arm.Center. This is a “fictitious” bone so that the IK solver gives the upper and lower arm an equal angle towards the joint. I just assumed that this bone would have the same length as the center-center distance between the furthest joints of each of the three “paths”. This could probably be proved via trigonometry, but it at least looks ok. I ran out of ideas for the top joints, so I have them just track a bone “projected” on the opposite lower arm. Again, no idea if this is supported by the mechanics, but it looks ok.
pozproductions (Nicola Possi) November 10, 2020, 12:30pm #6

WOW! thank you so much…it’s brilliant!
I don’t know it it’s 100% mechanical accurate, but it’s surely not needed for my purpose, so 1000 thanks for your help.