Hi All, first post here, so please excuse my lack of knowledge. I’m building a scene for a commercial project in 2.8, somewhat risky as I’ve never used Blender before, but so far, on the whole, I’m loving Blender (came from Modo). One thing I’d really like to achieve is to add lights that affect only certain objects, and therefore, excluding other objects. Now, after searching google, I’m learning this can’t be done in older versions, but I find it hard to believe this isn’t possible in 2.8 especially with the use of collections, though I’m seeing nothing that can do it, so far. Other programmes have made it really simple with a checkbox to exclude/include certain lights. So my question is, can Blender 2.8 achieve this, in a work around in any way at all?

Thanks in advance for any help/advice from you guys.

Not possible yet, but it is on their radar. As well as overrides, more passes functionality, a better outliner etc.
I would have done the research first

But good luck on the project!

Nope, it’s not possible, you’d have to use compositing.

Thanks for the info Rob. I did some research to be fair, but I had hoped I was missing something and some of you more seasoned Blender users may have a trick up a sleeve!!

Fingers crossed this gets addressed at some point soon.

Thanks for the reply, alas, that was the conclusion I had drawn.

You work with layers in that case. There you decide if a layer should receive light from another layer or not and thus add light to those objects. In the end you just render all images and merge the layers in the compositor. It’s really simple. I have a tutorial on basic layers/collection functionality here for 2.8: https://youtu.be/Q_SfxlD5YTg
For a certain object you can also control what that should receive and show using the “light path” node in the shader editor. It is also a powerful tool to control how an object should react on light and reflections.

Here you can see such an example I did for you. I decided that three spheres should not be lit of the area light, so then I just remove the possibility for the area light to shine in that layer. However, I would like the balls to cast shadows from the area light even if they are not directly lit by it, so Included “set indirect only” which means that they will be in the lit layer as well… but only as shadows as you can see on the plane. I could have selected to let it be completely without shadows as well… so it is a very flexible system. 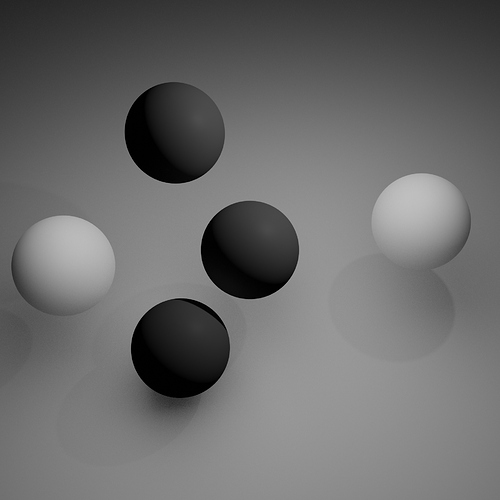 Yes, you can do it that way, but it quickly becomes quite a jumble of collections, layers and compositing setups when there’s even a handful of inclusive lights in the scene. You should be able to add some lights to a scene quickly that only affects a bunch of objects, without resorting to a whole bunch of scene setup workarounds.

imho this, and some other parts of the lighting process as well, are weaknesses in Blender that need to be addressed in the upcoming point releases.
I have worked quite extensively with apps like Softimage, Maya, Houdini and in a lesser way with 3DSMax and Cinema, but Blender really needs to come up to par on features with these apps.

Rgearding lighting, renderpasses and overrides, I think Softimage still has the best setup, even after 19 years. Maya’s RenderLayers have become workable, but still hasn’t the workflow or friendliness Softimage’s render system has.

I know that in some parts of the community the ‘standardization’ of Blender is not accepted well, but some overlapping workflows in lighting would do Blender some good too.

Other than that, I really like where Blender has come from, and is going to.

Don’t scare the newcomers away ;).
Yes, it can be a little work, but I still think it is fairly easy compared to 2.79 where we had a limited amount of layers and could not name them.
In 2.8, by naming the layers and collections in a good way and taking advantage of the tree structure makes it very simple to make complex scenes rather easy to work with if you keep it structured.
Since the amount of passes has grown and we now also has Cryptomatte the power of the compositor is also bigger than ever. Many people avoid to learn the compositor, but it is a great tool as well and to add a lot of layers in it, is also fairly easy.
However, with all that said, yes… an easy checkbox will always beat manual hard work, so it would be a big improvement as well, but I would not add it to my top of wish things in Blender since I feel that it is natural to work with layers, including lights and shadows, and it helped me a lot in the past when I had a weaker machine and was forced to divide my work a lot.

Thank you for your replies, much appreciated. I’ll look into this method closer. I need to learn a few more fundamentals though, especially layers, it sounds terrible, but having delved straight into some of the more advanced features of Blender, I’ve neglected some of the basics, and seem to be winging it a bit.

Hi. Would be nice to drop light in collection and only object in that collection will be effected(if you wish opt for it) and in outliner you could have possiblility of objects and lights be in as many collections as you wish.make sense?!

Sorry to rehash an old thread but I’m still flummoxed that this functionality hasn’t been implemented in Blender 3.x. I know you say this isn’t high on your list of priorities but as a user who only creates scenes ‘cinematically’ where selective lighting is paramount, this functionality would be a game changer.

In Cinema 4D you literally just use Include/Exlude tags, which takes about four seconds, compared to what would take a few minutes in Blender to set up view layers and a node tree in the compositor.

Best analogy I can think of would be turning on your car with the press of a button, vs having to open up the hood, wire up the battery, and then hot wire the ignition- every time you want to go somewhere! Yes the car still technically drives the same, but…

There’s one possible workaround for Eevee- by having lights that are pure red, pure green, and pure blue. Shader to RGB > Separate RGB > means you can have objects lit only by red, green, or blue lights

Hey !
I know it’s frustrating, and that has been a long request for cycles. I think it goes down to how the render engine is build in the first place, it wasn’t possible without a pile of hack, which is to avoid because it can add too much limitations in the long run. If that was easy to do it would probably have been done earlier.
Cycles as gone to a full rewrite, and eevee next is around the corner, it will probably append at some point.
When you start following the development and see how that works it’s quite easier to understand why some things takes much time. It’s interesting to read the discussions and the issues developers encounters.
We can complain about that missing feature every software as, in the end that generally doesn’t bring something constructive to the table.
If you really care about something, then do your homework and start reading about what devs work on, see if that feature isn’t planned , read discussion about the in and out of it. Blender development is open, that’s a chance we can really witness all the process and really understand what’s going on.

I hear you and I agree. I realized my post sounded entitled and complainey after I posted it. I was in the midst of a “damn this would be easier if…” moment.

But I do agree this is probably an architectural issue. Sure would make my life easier if someone would figure out how to code in some compositing tags though!

ok !
Seems that the topic is quite active : https://developer.blender.org/T68915
Doesn’t seems that someone is working on it at the moment , but eventually that will append.
It just takes times …

What are compositing tags ?

Please, Ton !
Please!
I need this a lot!

Compositing tags in Cinema 4D is a simple tag you give an object to tell it how to interact with the scene. You can specify how an object is affected by lighting, reflections, etc. It makes it very easy to compose a scene without having to do multiple renders and then combine them with a compositor, which is the crux of this thread.

Ok thanks ! That sounds cool !

Lol. I watched an ancient digital-tutors dvd last year I think and it really seems like Blender is only just now catching up to where Modo was 10 years ago.