I’m making paper craft models using Blender and Pepakura Designer 4. When I export a model with a UV map in Blender to the .obj format and import it in Pepakura, some of the quads have the linear interpolation direction flipped over. I’ll try to explain what I mean with this, although I’m pretty lost at what to even call the things going on here.

I’ve noticed that the way Blender and Pepakura interpolate the texture coordinates to a quadrilateral is to more or less handle it as 2 separate triangles. This leads to a bit of a problem as there is two ways of splitting the quad into triangles, and when the shape of the quad is different in the UV map compared to the 3d world, it leads to two separate ways to interpolate the UV coordinates with different results. As can be seen in the following illustration. 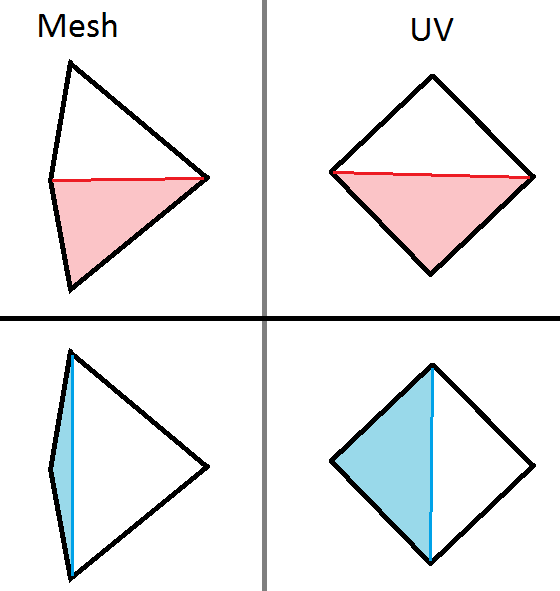 The red case has the quad split into two triangles horizontally, and the blue one has it split vertically for UV interpolation. As can be seen, there’s a clear difference in how the texture would map in the two cases.

I haven’t found any pattern in the way Blender assigns the direction a quad will be split into triangles in UVs, it seems that it just picks one based on some properties at the time of creation and sticks with it. There doesn’t seem to be any way to control the direction picked, or change it either.

Which brings me to my problem, when I load up my exported model in Pepakura with UV mapping and texture applied, some of the quads have this invisible UV direction on it flipped leading to distorted textures. To demonstrate this I created a grid of distorted quads in a variety of different ways unwrapped it as a regular grid of quads and imported it in Pepakura. 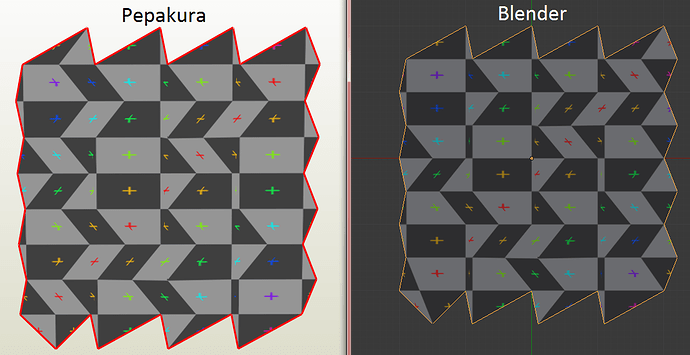 As demonstrated in the image, the UV interpolation directions for some of the quads have been flipped over. On paper craft it’s particularly bad since the usage of distorted quads is common to trim down on the polygon count. I’ve attached a .zip file with the files I created the above with to aid in reproducing the problem.

I don’t know what to do about this. It causes ugly distortions on the textures of my paper craft models, and fixing it after the textures have already been made is not simple. Obviously I could triangulate my models before exporting them to Pepakura, but it makes working with certain types of structures in Pepakura difficult and I really want to avoid that. I wish there was some kind of toggle on the exporter that would fix this, but I’ve tried all the obvious ones (Keep Vertex Order, Write Normals, Include Edges, Apply Modifiers) and none of them did anything. I’ve also tried using the .3ds and the .stl exporter, but both causes all quadrilaterals to be converted to triangles which is what I was hoping to avoid.

It would be very helpful if any of you with a different 3d modelling program that can import Wavefront .obj gave it a try on the quads.obj file in the attached archive. We should be able to identify if it’s a problem with the Blender .obj exporter, or the way Pepakura imports .obj files with third party implementations to compare with. Maybe export it to .obj again and see if third party .obj exporters do something different.