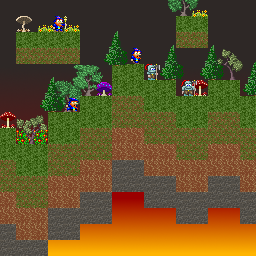 I have most of the level geometry tiles complete. I should have some sort of demo soon.

Check out my avatar to see the scale in action.

The prototype will be definitely in blender game engine. Hopefully this will evolve into a alpha-funded game.

The gameplay will be very simplistic. The end game will be more of a casual animated chatroom, or a heated battlefield.

Each team makes their own kingdom in real time. You can also farm, mine, and build to pass the time.

If you are feeling a bit like some combat, you can send over some of your troops to meddle with your friends kingdom.

Gameplay will be realtime, everything happens at the same time, so you are free to pursue whatever path you want to take.

Cute and cuddly. Yet lethal, and ruthless!

Sounds pretty interesting, and I definitely like the idea. I just want to ensure that you know Python, though. While the idea is relatively simple, the actual implementation would take a bit of work with Python.

Yes Python is very important. I even bathe with it.
I have the game looking OK now. I have taken precautions to eliminate the lame OpenGL UV map bleed over. You can scale freely and not see any seam artifacts now.

What I would like to do is glue the mip maps and interpolation off. A code snipplet I could copy and paste would be very helpful.

Just pasted a bunch of tiles over a couple of gradients. The actual game will not have this much tree noise in the foreground layer.

As you can see there is a lot more work to do on the terrain tiles.

I am going to switch over and do some logic programming. Maybe I can get a quick little demo up with the entire cast walking around tonight.

After nearly 2 weeks of playing with the sound system in BGE I must finally surrender.

I can not get it to work with my game using logic bricks or scripts. In the time it took me to try to get this to work I could have learned a completely new game engine. My only alternative was to use a 3rd party development tool called PyGame, but it is just way too “Rube Goldberg” for me.

I am working on porting this game project to Unity now. After a 2 hour session with the tutorials, I can already do more things than I can do with the BGE. The scripting is really straight forward, and their logic system is much easier to manipulate and use for my needs.

I should have done a lot more testing before jumping in and announcing a new project.
It was very irresponsible of me.
Thank you for reading my apology.

Well, I never heard of sutch a sound problem, what actually happened ?

I tried a few ways of adding sounds to my scene.

First was the obvious, Just add a sound block to an empty and add it to the scene when I want the sound.
Crash after only a few moments.

Next I have an empty on layer 1 with the sound block, and the empty that gets added from layer 2 sends the message to play the sound.
Same crash

Next I put a cook down timer on the empty in layer 1, so only 1 sound can possibly be played at the same time.
Still crashing.

This is all just the tip of the iceberg. I have tried all kinds of other ways too, the above listed are the ones I though for sure would work.

EDIT: I just tried it in Blender 2.63.4 (GraphicAll build) and I got no crashes for a minute or so.