Hello, im currently working on a project to get to know blender rendering.

Been working for this on and off for about 4 days now, mostly testing settings and trying the parameters (this is the first time i’ve tried a somewhat serios render in blender).

The thought behind the image was to get some horrorish style on it.

I’ve pictured myself a little girl with black long hair (like samara from’the ring’) going up the stairs with the bloody scissor, throwing it aside and then gone in to her room.

Dont know where to take the image from here though. One thing thats not in this render is the letters on her door… and also the softness of the shadow in the stairs is corrected… will post next update (dont have time to render it now;) …

anyway any ideas for features and comments (about lightning, material, models etc) are very welcomed… 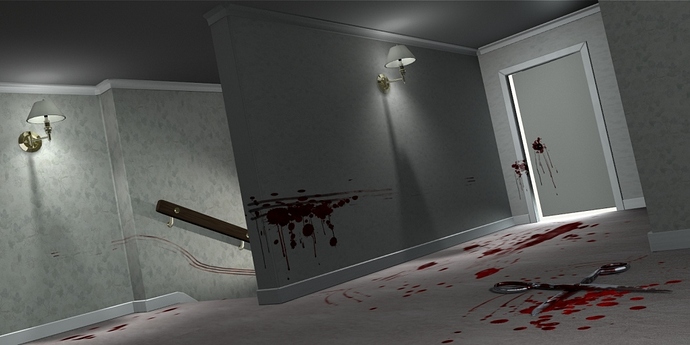 no crits from me

now i want to whatch a horror movie

updated: some letters on the door, and a different lightning…

im thinking about a dof effect to bring som focus to a part of the image… right now its too much to look at, and it looks kinda disorganised… 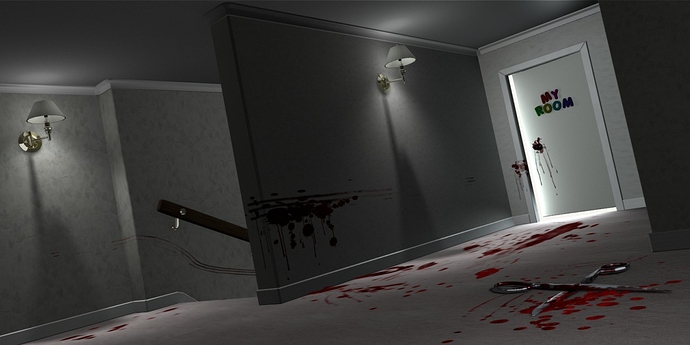 I don’t like the blood stains on the floor by the door, and the scissor. They look a little painted on. Otherwise splendid stuff

Hmmm… the perspective or the scale is off. I think it’s the scale, but I’m not 100% sure. The scissors look too big IMO, thus why I mention the scale issue.

yes, as BgDM said(which i noticed last night when i glanced here) the scissors look like they are huge. so either your angle is so messed up that they are looking to big, or they are just plain huge

I like the materials a lot, but you can make them a bit dirtier.
I hope you’re referring to the original Japanese version called Ringu :]
The scissors are idd huge, I wonder how the girl can lift that thing.
Care to explain how you did the blood?
Because it looks awesome.
P

I laaaaaughed!
Very cool, but some thoughts: simplify the composition–just use the right half of the image. Or shorten the wall between the stairs and door (editing out part of the “story” that isn’t adding that much, so you can zoom in on other parts that are more important). Have the scissors dropped by the door (maybe she had to drop them to use both blood-slicked hands to turn the knob). With this tighter composition, perhaps you can still have the scissors appear prominent, yet still appear to be in scale with the scene.
My first thought was that the person came OUT of the room. Maybe add bloody footprints to help hint at direction via their shape, and by fading a bit with each step. Zooming in on the door so the doorknob shows up better may also help this (with knob more prominent, the reason for blood on the door is more apparent).
Most of the blood spatters don’t really make sense. There doesn’t seem to be any reason why they are there–primarily those on the floor, and the blotches on the wall (where the streaks from the fingers suggest the person walked steadily past, the blotches suggest pauses).
So in general, define the story behind the scene, and think about what is bloody, and where and when the blood drips or is otherwise transfered to another surfaces, and work from there. In your post you described a story, but the blood doesn’t really match that story, IMO.
Oh, and something weird with the crown molding in the corner obove-left of door.

By the way, don’t run with scissors.

thanks for the great input guys, i really didnt see the size of the scissors myself, thanks for pointing it out

jfarm: thanks for the good points, i sat down and really thought about the “storyish” idea behind the image and ended up redoing quite a lot of details. The footsteps was in the originial image but you really couldnt see them becouse there was so much blood over them.

vliegtuig: the blood is made from a polygon with a two layer texture on it, one for color and one for alpha… so i just replace the alpha texture for the different splashes…

anyway, i dont really know where to go with the lightning now, apart from the lamp im not at all satisfied with it, it looks horribly dull =/… any ideas? 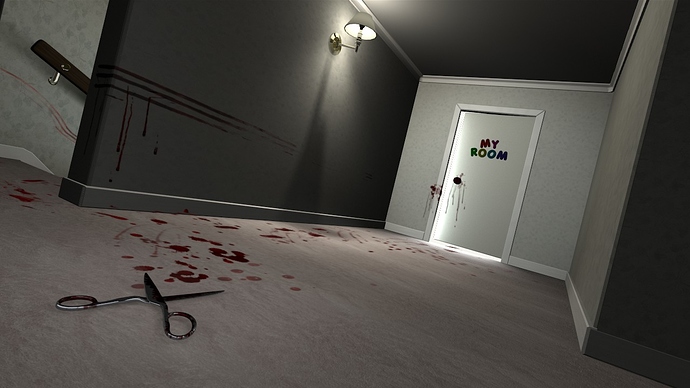 to me its not scary enough, its too bright. also the happy my room on the door takes away from that too

For some reason this reminded me of a really, really old game I played a couple of times where the character’s car breaks down outside an old haunted mansion, the guy goes in and wanders around trying to find help, and every time I ended up dying when I clicked on what looked like a lady in a white gown that was really a skeleton. Always freaked the hell out of me. Therefore, kudos for your pic eliciting that reaction from me.

think im gonna let her face show through the hair, but i dont really get along with the splineguides for hairs so i dont know 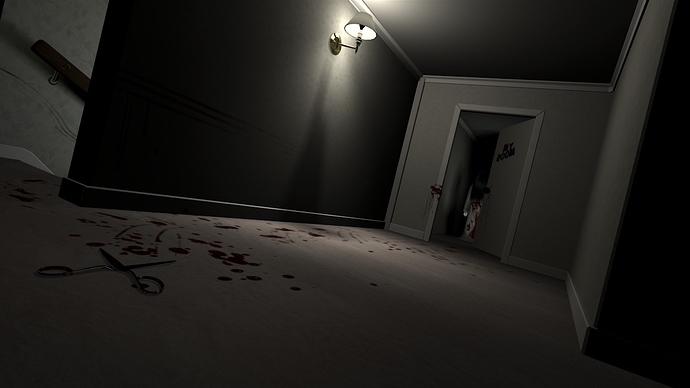 Wow! Lots of improvements.
The blood drips on the wall are superb (never thought I’d say that)–initially sloping down and forward in the direction of motion, then running straight down the wall. Compared to eariler version, a good example of less-is-more. Gives a good sense of motion and direction (complementing the fading out finger lines). Possibly give finger lines a little up and down variation like on stairs, depending on what you are shooting for–straight=cold, mechanical motion, varying=more playful, childlike.
The footsteps are more visible now but still don’t pop out to me. The low camera position is good to get close to the scissors and give a creepy feel by having everything tower over you, but makes it hard to see the shape of the footprints to identify them as such. So that leaves the pattern of the steps (regular, alternating left/right) to identify them. But there seems to be a gap in them between the lamp and door, which breaks up the rhythm so they don’t really pop. Continuing the steps all the way to the door should help.
The new camera position exposes more of the light bulb, which appears black. Maybe it is supposed to be one of those bulbs that has part of it metalized? (If so, it would still appear gray from light reflected off lamp shaed.) Or is it just a model problem? Looks odd though.
Can’t really see the blood on the scissors anymore. In the original image the light from the door reflected off them which made the blood visible. The new location they reflect the dark wall, so you can’t see much on them. (BTW, more story: were they used to cut or stab? The original image had blood along cutting edges, suggesting they were used to cut rather than stab)
Lighting: latest is way too dark now, IMO. Had to grab the image and brighten it to see anything. Before, Mr. Man thought previous img too bright, but I thought it OK. Maybe different monitor settings

You said you thought the lighting “dull.” What lighting and rendering settings are you using? Looks like radiosity was used, but perhaps no shadow casting, e.g. the scissors don’t seem to cast a long enough shadow toward the viewer from the wall lamp; there’s no shadow coming out from the end of the walls on the left and right. Perhaps turn on Raytrace if you haven’t already, and set materials/shaders to cast (Traceable) and receive (Shadow) shadows. (The diffuse shadows of the stair railing and the lamp fixture are great though–try to keep those!)
Mixed feelings about the addition of the girl. Certainly provides a concrete creepy character to cap off the scene, but I did like the original, where the blood told the story of something bad happening downstairs, a short person came upstairs and went into the room. The letters on the door tell you it is probably a kid. The mostly closed door leaves it up to your imagination what hideous thing is behind the door. And between the clues in the blood and the light on in the room, whatever it is, IT IS STILL IN THERE. AAAHHH!
Sometimes less is more.

Hey Christoffer, you been watching ‘The Ring’ or playing ‘Fatal Frame II’ a little bit much? That thing behind the door looks like the girl in The Ring and a few things in Fatal Frame. Nice job on that, I look forward to seeing more creepy improvements.

It also reminds me of an image I did way back when, before I got into Blender, I use Anim8or:

I intend to re-create it in Blender, but I doubt it would be as good as yours. Great job

think im gonna let her face show through the hair, but i dont really get along with the splineguides for hairs so i dont know

Where is the furniture in the childs room? I dont see any, atleast some tapestry (whatever its called).

Anyway, if you give her a face (which I strongly advise you not too, it takes away from the atmosphere) make it look like her in the Excorcist. In this case, the excorscisst.

Yes, with the scissors, don’t know if it’s been mentioned already, but you definetly got inspiration from the clock tower series on that one.

In that case, the scissors are not too big, they’re just the right size. But you need to make them less clean, maybe?

Plus, the way some people are making it sound, of course if they think they’re regular scissors, they’re about 20x too large. Of course, they’re meant to be that large!

But yeah, it’s definetly the angle on the scissors and the fact the metal looks too clean, not grainy enough, and they’re a little different in shape than I picture from clock tower 3.