What could be improved? I am looking for real insight. I have a hard shell don’t worry about putting the art down. What is good? What is bad?
Note: I have the brightness turned up and will likely turn it down a bit on the finished render. 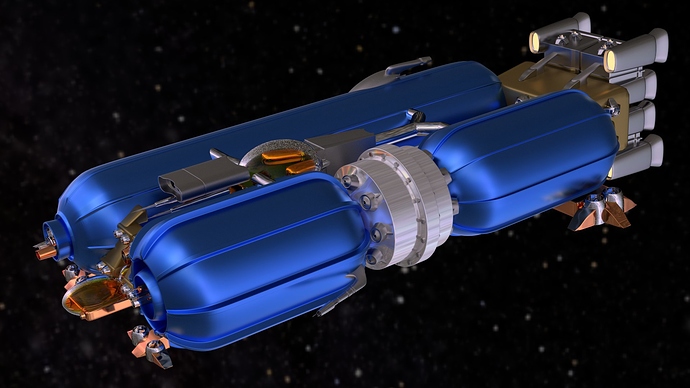 First off, nice start, and interesting design. I like the non-conformist approach to spaceship design, and that it doesn’t look like the million other spaceships out there.

By way of critique, I’d say a way to improve this is to change the materials a bit. They fool the eye a bit at this point about scale. I’m assuming that that bubble in the front of the ship (lower left corner?) is the cockpit. When I first looked at the image, I thought I was looking at a rocket pack for a suit, but a lot of that scale problem can be solved by adjusting the materials. Right now, they’re a bit too “clean”, and the anisotropic banding, particularly on the silver part, is too large, mucking up the scale.

A few more smaller details, or perhaps an additional habitat section with a few windows and airlocks might also convey the proper scale of your model.

All in all, I’d say you’ve got a beauty, here, though. It appears practical and functional instead of fanciful like many starship designs do.

Thanks JDaniels!
I am glad you got the main idea, to make a spaceship that looks like it could really be built, something practical yet hard SF and novel. I am sick to death of seeing spaceships that look like expensive graphics cards with blower and all. Or my all time worst spaceship in star wars. They guy that made it should be exiled from all artist groups, LOL They were even so lame as to turn the flames into metal!

I think you are right about the details. I did a lot of internal debate. Part of me wants to keep it super clean and another part says it needs a lot of fine details and some grunge textures.

As far as what does what, I tried to avoid that. It might be a cockpit but then it might be a runabout or just a sensor. I sort of want to leave a feeling of not really understanding the tech.

Thanks for your input!!
Douglas

I am going for an industrial look, almost ISS space station but perhaps just a touch of steampunk.
I took this photo yesterday in hopes to inspire my design.

This is a cool concept…and I like the fact that you want to keep the function of the components somewhat mysterious. I also agree with everything JDaniels said. When I look at it, it appears to be toy-scaled. It took me a minute to figure out what was making it feel this way, then I realized that the hardware, or the “nuts and bolts” appear very similar to button head screws or countersunk screws commonly found on remote controlled toy cars. The main ones that throw off the scale are in the front near the copper colored components and then the larger allen-head-looking ‘screws’ on the front of the fuselage coupling…or whatever it is. Again, this looks cool and I bet the final product will be great

LOL, all those nuts and bolts are thrusters or something like that. The only nuts on the whole thing are on the white thing between the big blue cylinders. Seems I have a lot of work before me! I guess that is what I get for making everything chrome, copper and silver.

I agree I think at 1st impression i thought it was a repair or replacement part of some kind. I actually like the colors and how they blend. Yes maybe scale down some of the bigger parts or with more detail. Wow the color of that blue is awesome.

I actually like the colors and how they blend. Wow the color of that blue is awesome.

The color is gun blueing.
Thanks.

If that is what you are looking for, pay www.lostareas.de a visit. That page is in German, but it hosts mostly pictures and has a simple navigation on the left. “Stahlwerke” (steelworks) and “Kokereien” (coking plants) could be an inspiration for you.

Sersch, you live right next to me. I live in GE-Buer. The photo was from here: http://www.landschaftspark.de/startseite
Thanks for the link. Some good source material there.

Here is an updated image. All the work here is mine but I must give everyone that helped credit as well. Without your help it would not be at this stage. Still needs work and I am still looking for more critz! I still am mostly working on the mesh. Have not really started the materials but have seen others work on my mesh and it amazed me!
Thanks.
PS Markus was behind a lot of the improvements so far. 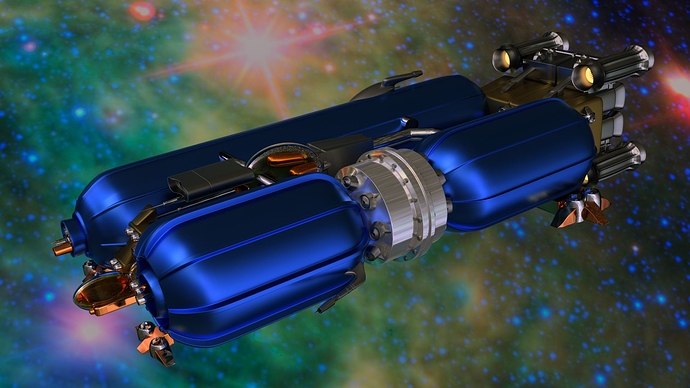 Space is not that bright. A spaceship can not be lit up. Use the ships lights. Or a nearby star to lit your ship.
I did a quick photoshop of what I mean: 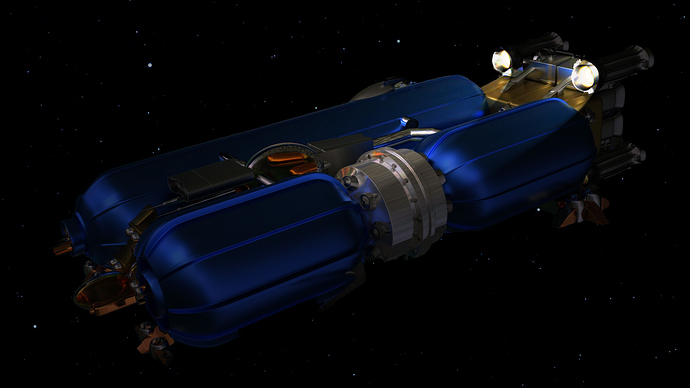 Also the scale? It looks the size of my kitchen table.

Thanks. I know what light does in space but as I posted at the top, I want to make the details of the model clearer so people can better crit it. The other problem is that if you make the light physically correct then most people will find it ugly and wrong even though us that love hard science fiction know it to be correct. I, in this case, chose to go arty and open rather than sciency and ugly.