Until yesterday, I only knew a few basics and I’d only made a few models from the Blender: Noob to Pro tutorials, and one .45 caliber bullet. I’d also started a gun model but I got stuck pretty quick.

Yesterday I decided to try a different, simpler gun. I went with the Ingram MAC-10 because it’s mostly boxy and simple. Right?

So, about eight hours of work later, it’s starting to look pretty good (in my opinion). I reached this point at midnight last night, and I’m going to work on it more today.

The hardest part was the back of the handle, which is all curvy and everything. I had to figure out a way to do that and it took me almost two hours.

Keep in mind I just started using Blender on Friday and this is the first thing I’ve tried that’s complicated at all.

I need to make some changes, add the rest of the parts, and add a texture. I also want to try bump-mapping some places, but I can’t find a tutorial on bump mapping. If anyone knows a good one, that would be helpful.

welcome to Blender and Elysiun! i like your work. looks very clean. extremely promising for a beginner. No crits from me!

edit: Modeled half the wire stock. I want to mirror it to make the other side, but when I do it doesn’t stay on the grid. Anyone have a suggestion?

Finished the stock and fixed a bunch of problems on the underside of the body of the gun from when I beveled it earlier. The problems (and fixes) aren’t visible from this camera angle, but in the above shot showing the back of the handle, you can see grooves in the bottom of the body above and behind the handle.
http://img.photobucket.com/albums/v210/thelonesoldier/blender/macrender4.jpg
Comments and criticism welcome, of course. Forgot to mention that earlier.

what was your style for modeling it?did u use nurrbs surface?

I don’t know what that is, so I don’t think so. What exactly I do depends on the part. For some things, I just made a mesh (a cube or cylinder for example) and moved the vertices around, and extruded the vertices to create a more complex shape. For others, I traced the object with a bezier curve, and then converted the curve to a mesh and extruded that to make it three dimensional.

Model is essentially finished. No clue how I’m going to texture it.

the pistol grip could use a little more smoothing, IMO, and a magazine would be nice.

the pistol grip could use a little more smoothing, IMO

How so? I have it set smooth, I don’t know of any way to set it more smooth. What else could I do?

As for a magazine, yes, I should add one. Probably tomorrow. I didn’t remeber to leave space for one in the grip, but I guess that doesn’t matter.

To make make just the edges smoother you can subdivide (W->Subdivide or Button window->Editing->Mesh tools->Subdivide) about for times and then press the subsurf button (Button window->Editing->Mesh->Subsur). The first field under subsurf button is how smoothed it should be in the 3D window (the higher number the smoother it be) and the field next to that is how smooth it should be whan you render it.

I know how to subserf, I just hadn’t realized you can subserf objects seperately.

Anyway, subserfing it makes it look much worse.

there’s a lot of bump mapping tutorials around. you don’t need any blender specific tutorial. you can also do normal mapping. i think there’s a normal mapping on blender3d.org .

you might want to add some metal materials. you can find some basic materials on the ressource link from the blender3d.org site. you can then tweak the settings. that is, if you want quick results. otherwise just play around see what settings is doing what. if you want to learn.

you might want to add this metal material, some bump map and maybe some rust, to add realism.

next time, maybe try modelling something else than a gun (pacifist is talking).

Been trying out a basic texture metal texture I made (scanned and made tileable), which I don’t like, and also added a little bit of detail with normal mapping, which I am mostly happy with. The two parallel ridges don’t look right and I’m probably just going to make them a mesh. 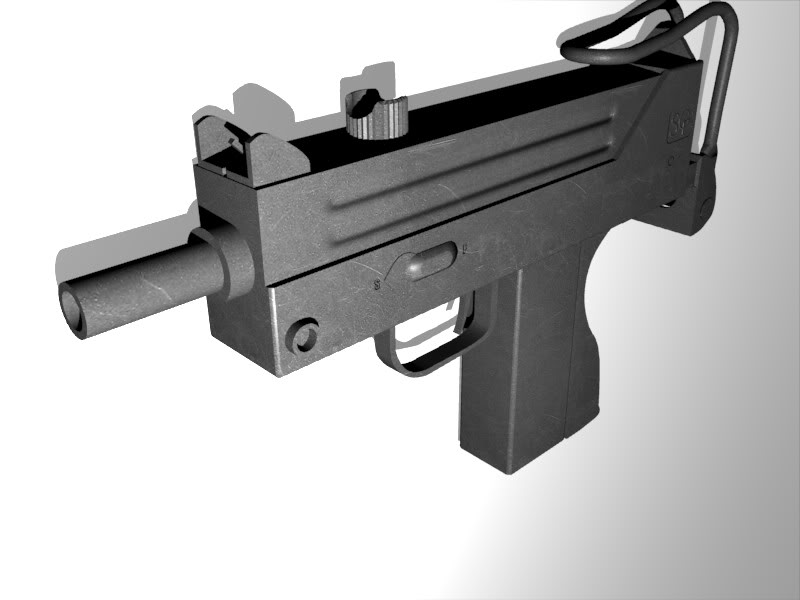 Any suggestions would be appreciated.

A much better version, this time rendered with YAFRAY. 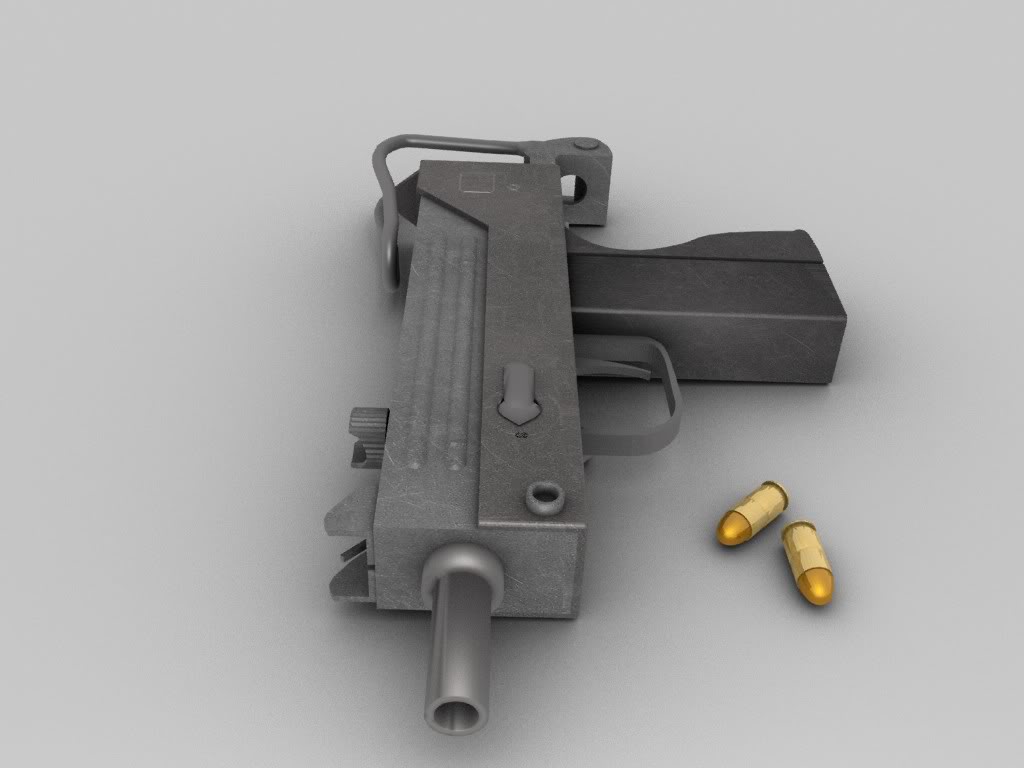 The fire selector needs work (right now it looks like some sort of gray blob) and I can’t get the shells to cast radiosity light, but otherwise I like how it looks.

You have only had blender in 15 days and already you learnt render with yafray. I have used Blender in about 5 months and never tried yafray. It looks good.

Actually, thinking about it, the barrel looks pretty weird too, anyone what I could do to fix this? I had to use a basic material because when I used a texture, it stretched it all to hell. It still looks like it’s stretched all to hell, actually… I tried setting it to global and orco, and setting the mapping to cube and tube, but it always is stretched. Also, the wider back portion of the barrel is a completely different color, even though it has the same material. Is this all because it’s set smooth?

Also, the parts I normal mapped don’t look very good in Yafray… the parts closer to the camera get very dark and jaggedy, while parts further away with the same height are very light and some detail disappears.

Wow! I’ve been watching the progress on this. It’s looking to be really nice.

Check out the other ones too, they’re helpfull.
Apart from that, it looks wonderfull.