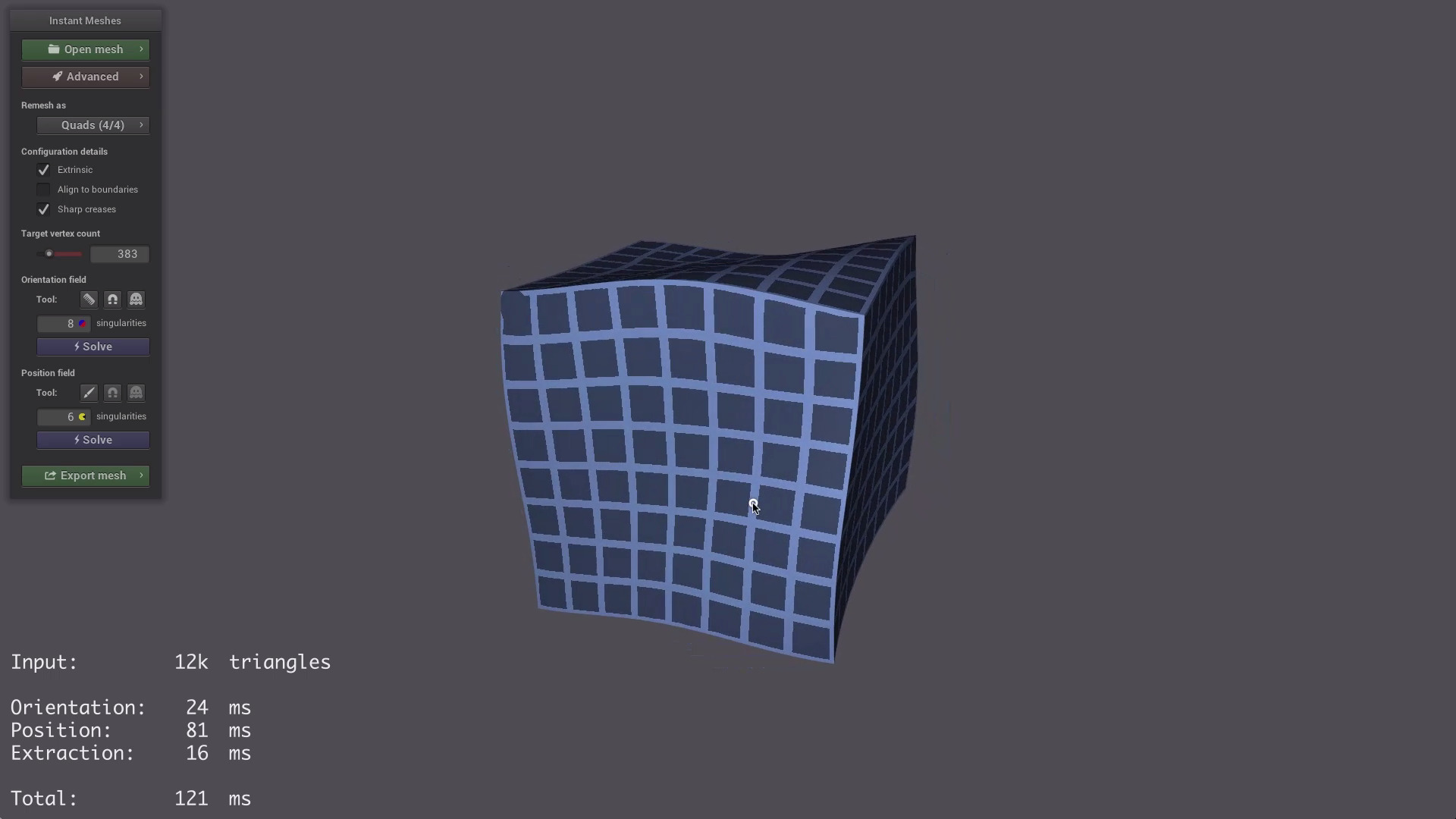 Wow! And the code seems (I’m no expert) but it seems to be GPL complient? And WOW!

Add this asap if it’s viable.

EDIT: Possibly easier or better would be a set of automatic import/export scripts.

Hmm… I´m currently trying it with several meshes but all my results are garbled nonsense. It works fine if I use the examples that come with Instant Meshes but as soon as I import my own meshes it fails.

If you want to try it note that the import process is a bit strange. At least for me.

-Besides the binary file from the github link raziel_henzo posted you also have to download a file called “datasets” and place it in the same folder as the binary.

Does anybody know how to do that?

I managed to import useful geometry to Instant Meshes. You have to disable the “export normals” option in Blender when export to .ply.

Anyway, when trying to export the geometry back to Blender Instant Meshes crashes.

What it does works nicely in general. It creates quad meshes and adaps acording to the strokes input by the user. However, it would profit heavily from an option to manipulate the strokes after createing them, esspecially for hard surface models such as geometry imported from CAD files.

I don´t fully understand what singularities are but i guess it´s either poles or tris.

There are a bunch of tools the user can use. The Edge Brush and the Orientation Comb are pretty straight forward but the Singularity Attractor (Magnet) and the Singularity Scaring Brush (Ghost) I have no idea what they do.

This is BSD-Licensed? Wow. Looks like this is it. The fabled autoretopo we’ve always been dreaming about.

Kudos to the authors!

Is the video hosted anywhere else? I can’t make it through the whole thing without it losing a network connection.

I cannot import obj or ply with the windows version

Had the same problem but you can use the command line to open the file. Or jusr drag&drop the obj onto the exe.

About the only thing missing here is a way to affect the density of the output mesh.

Were you able to export the mesh without crash?

Nope, it crashes when I try to save it.

I meant for production, you need to be able to change the density for some parts, while keeping others sparse - for example on a character, the face and hands should be much denser than the torso. Otherwise you’re wasting a ton of memory where you don’t need it.

Also I’m totally mystified about how the singularity attractors are supposed to work, I can’t seem to make the tool do anything at all.

Yeah, me to. The Attractor doesn´t seem to do anything and the Ghost is allways grayed out.

I just tried a mesh I made in Marvelous Designer a while ago. The results are nice. I get a tris and ngons here and there as well as a couple of holes in the mesh which are circled in green.
Left is the original out of Marvelous Designer, right is what Instant Meshes produces. 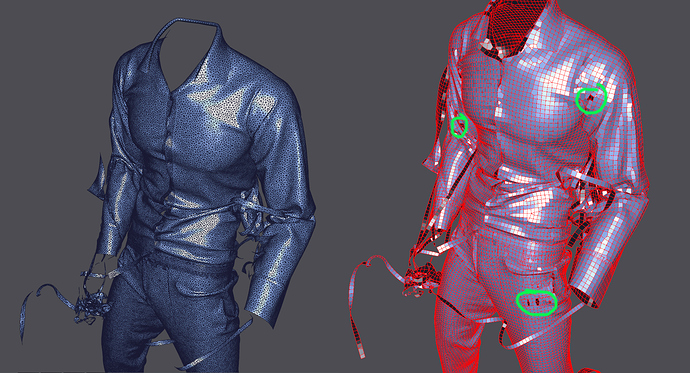 looks interesting but is there
any blender file with script to test that ?

This is an external program and has nothing to do with Blender.

Yesterday i wrote in a reaction in the “no more wireframe view thread”
For that for that to happen we better have a good system to make quats, well this seams to be part of the solution.
Combine this with ptex… and … wow again…

I’m kinda supriced how fast the math in CG is developing these days.

FIX NOTICE: Re-Download the latest version. It fixed the saving issues for me. It also allows opening .obj files without having to drag/drop them. Also, when you save, make sure to manually type the .obj extension, so filename.obj

Comparison between the Instant Mesh and ZBrush ZRemesher. Note these were set to 25K polys (IM came out at 25K but ZR exported as 33K polys), default settings and no curve adjustments. Obj files imported into blender 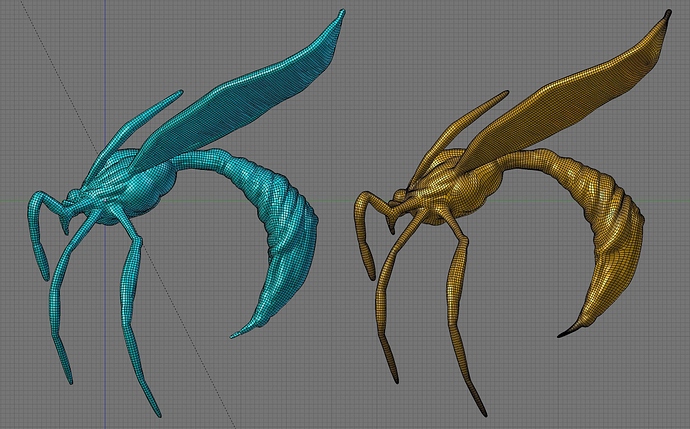 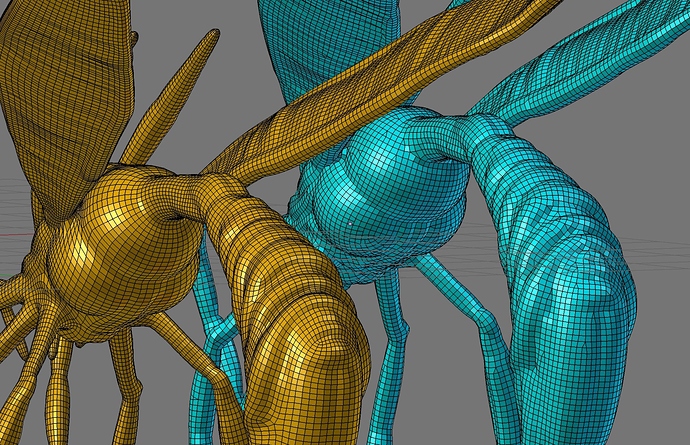 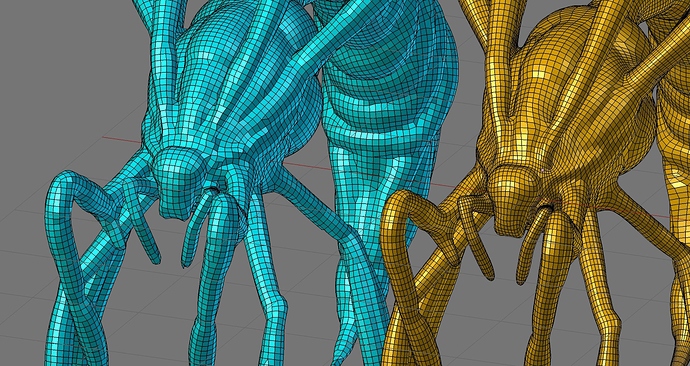 EDIT: When I ZRemeshed to a mesh with 25K polys there was little difference in topology to that above with 33K polys

Indeed ! Hard to do better than ZBrush ;D

Richard Marklew thank you very much for this comparison !