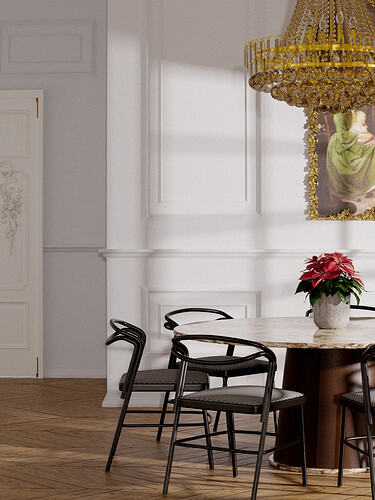 This generally looks nice, and feels calming to me.

I would up the lighting a bit - get some strong light beams on the back wall. I personally like it when a small part of the image is overexposed. I would also try to make the sun directly hit the chandelier to get some interesting sparkles. I take this back - I think doing that would cause the image to loose it’s calm look.

I think the piece would look better without the painting - it blends with the lamp too much. Although, I must say that you’ve done some nice modelling on its on the frame - how’d you do that?

The lighting on the wall suggests that the sun is below window height because it slopes up. I find that off-putting.

The joint between the skirting board and the floor is too clean - in reality there is always a small gap. Dirt in corners of walls and trim also helps sell realism. Probably not the best way, but you can fake dirt by mixing in some ambient occlusion into the material.

Is there any reason why you don’t use de-noising?

Love the sculpt on the door.

Thank you so much for your input!
You’re so right about the light coming from a weird angle I haven’t even noticed that.
The frame is not my model, its from a free model of a mirror.
I used denoising, but I added grain later in Lightroom, I’m guessing this doesn’t work?
The rendered image I have is this. No, I prefer it with the grain - it just looked like you rendered thousands of samples when a simple denoise would suffice. 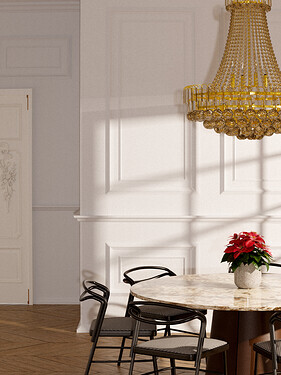 untitled_00-22880×3840 3.26 MB
You right adjusting the light direction and also making it a bit warmer really helped! I also liked it without the painting, I feared it would feel empty but actually the image feels more balanced this way (I guess sometimes less is more), but I also liked the painting so I don’t know which way I 'll finally go. I’ll be sure to also add some dirt in corners and some imperfections and see how it looks.
Kazrarr March 21, 2022, 5:19am #6

So, first of all, and the thing that’s the most disturbing to me is the gold chandler, it doesn’t seem right :

Next is the composition, it’s seem a little bit unbalanced, maybe try to adjust the locations of your scene.

The lighting, is already better than the start. But there’s only one source of lighting, right ? So the part on the left with the door and the wall is really dark, and it’s pretty weird to look at.

Finally, one small detail : have you bevel the edges of the table ? (it’s helping catching the light to make it more photorealistic) if so, try to make it a little bit wider.

I’ve tried also to adjust the colors and I’ve added some dust in the air, something I always do for photorealistic renders, even if it’s subtle, I think it really add to the scene. Thank you so much for you feedback! You’re so right, I’ll try to add some imperfections to the chandelier and change the gold material to a used one.

It’s material is reflective enough, but I think I doesn’t show 'cause of the lighting (I’ll try to tweak it). For its location you 're right it doesn’t look right, but it actually is, its on top of the table. 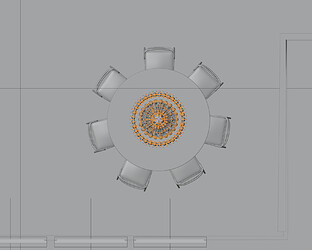 Screenshot_21780×1422 165 KB
There are two lights in the scene, there is also one behind the camera (where it is supposed to be another window), and I think because of that I have the chandelier’s shadow on the wall which makes it to look very close to the wall, I’ll look into it. The table is beveled yes.
I love what you’ve done with the colors and dust and your advice has been really helpfull, I’ll try to tweak it a bit more.
1 Like
sundialsvc4 (sundialsvc4) March 31, 2022, 2:45pm #8

I think you’re beginning to get close to “overexposure.” Your first shot was already extremely good. Don’t bleach-out the tabletop texture.

Remember that a scene-shot like this one is always supposed to present the scene in the best possible fashion: utterly clean, properly lit, suitable choices of what to include and what to leave out. I think that your choice of tight cropping works very well here.