Hi, I’m working on a kitchen scene using a photo reference to practise interior lightning in cycles and hopefully make a nice scene. I’m using a hdri and sun lamp as light source and I have a door opening in the scene behind the camera however the first shot is without the door opening, I actually like the resulting light, but the scene is way to dark.

I find that openings in the room where light can enter reallly changes the mood of the scene, like you are taking a photo with a flash, it becomes a little stale.

Any feedback is highly welcome! 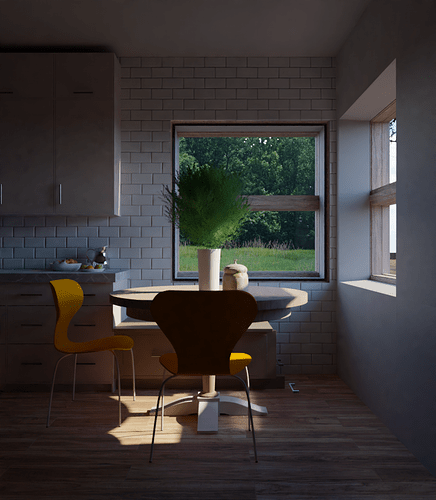 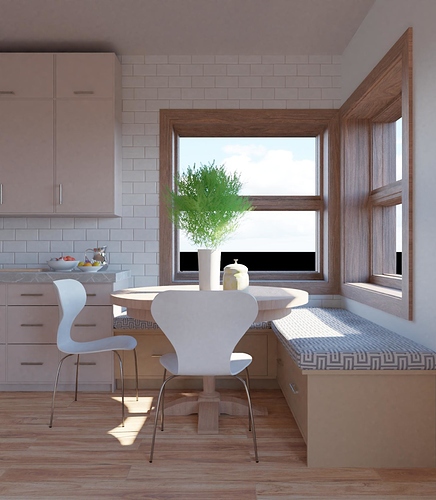 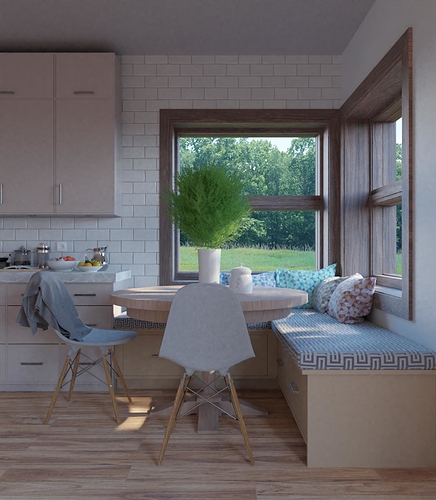 Update time, I lowered the HDRI to give the scene contrast between the sun and ambient light and I do like this look, altough I have yet to do post production.

The back of the front chair suffers from denoise artifacts so I have to increase the sample amount to fix that.
Also, maybe there is to much empty space infront of the sitting area on the right?

I’m not sure where do go from here, so I would really like some feedback or critique! 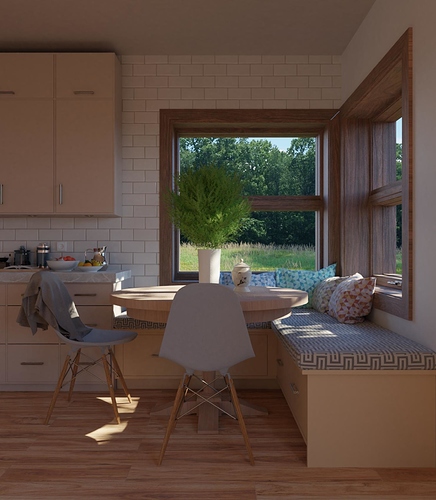 Update, I opened up the back and sides of the room as an test. This is the result, I didn’t have to increase the samples as the additional light resolved some noise issuses. I think the background needs some more work, I could either overexpose the background but that would take focus from the main focal point of the plant on the table so I don’t know. 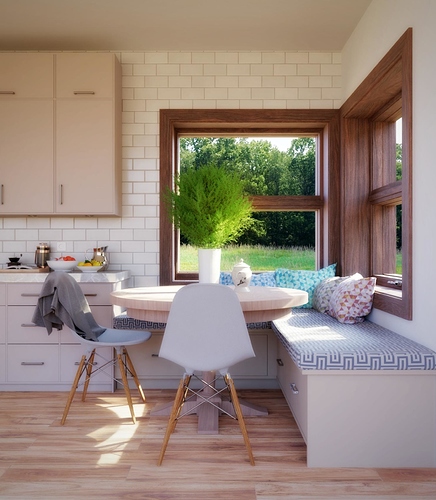 I think I call this done, I don’t like the render, little too much glare and slighty to overexposed and the background doesn’t fit in and takes to much focus but from the scene. 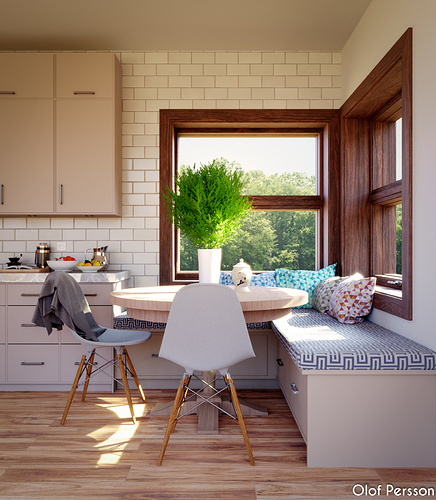 I think I call this done, I don’t like the render, little too much glare and slighty to overexposed and the background doesn’t fit in and takes to much focus but from the scene.

Have you tried using filmic for it yet if not i recommend it, i like these scene and renders and they would probably look better with some hdr color managment like filmic as doing it manually is alot harder and requires alot of time.

Thanks, I rendered it with filmic color management and added the backdrop in the compositor, the problem was getting the overexposed look of the backdrop and blend it in the scene.

There is no glass in the windows, is there?

I like the Photoshopped image better. It has a bit of realism to it.

Good call MartinZ, yeah there is no glass in the render, I had to render the background separate due to memory issues if I wanted to use the GPU and If you have windows you cant use film transparency setting, it just complicates things when that happens.

Thanks for the input Xero, I would agree with you. In that render I rendered the entire scene with the cpu which gives the lighting more cohesion than adding the background after I find. Oh well you learn for the next time.

Thanks, I rendered it with filmic color management and added the backdrop in the compositor, the problem was getting the overexposed look of the backdrop and blend it in the scene.

An HDRI is scene referred. A BT.709 based linearised photo from raw sources work. Anything properly linearised to scene linear works.

Think of any image buffer as “a series of energies”.

When you manage to get all of your assets “aligned” under a single scene referred “ground truth”, you can exert less effort and achieve elevated work in less time.