Hello,
My first post here!
I just wanted to try to get some feedback on this interior I’m working on. It’s for a personal project and my aim is to get as photorealistic as possible. I’m still modeling some assets and changing textures and colors but that’s how it looks now: 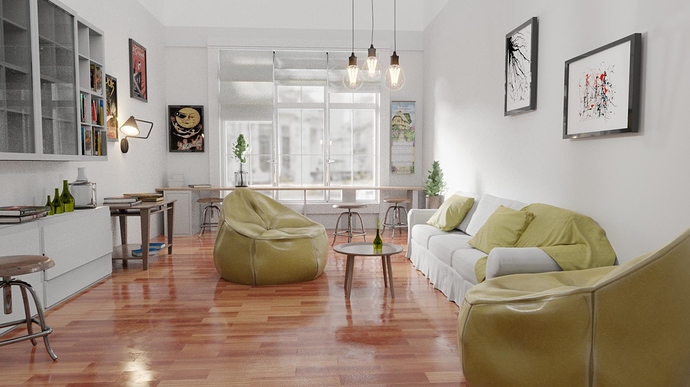 Wow this is really good, I think you pretty much nailed it. There isn’t really much to critique, to be honest, but I’ll just throw a few things out there that I noticed. The glass bottles on the left seem a bit out of place, something about them doesn’t look real. I think maybe it’s how the glass is bending the light and also how the glass it laid 100% flat against the table, it creates a strange effect that makes it look almost like it’s embedded into the table (if that makes any sense).

Another thing, not anything big, but the shelves behind the glass on the left are empty, it seems like there should be something in there, maybe some books, boxes or something.

The kink you added to the light bulb wire in the middle, not sure if that would really look like that, I would expect the wire to be loose and flimsy, so unless you are trying to capture the light swaying in motion I don’t think it would sit like that.

One more thing, not very noticeable, but the plants look fake. If your going for a fake plant look I think it would work, but if you want a real plant look you need more variation on the leaves, a couple dead ones would help.

I appreciate that you may have cut down on render time but the most obvious thing wrong to me is the noise.

Are you using de-noising? With a decent amount of samples, it would make a world of difference.

There seems to be a lot of rendering noise, but I guess the image is not definitive as to its resolution.
Personally I would turn off the lights (except the lamp on the left) to let in only the sun.
The floor is too glossy in my opinion … maybe more matte with stained areas differently would bring more realism.
And finally, I think there is a problem of scale between the sofa and the rest. It seems very small compared to books, for example.

My critique is mainly that it looks TOO sleek, which might not be what you’re going for. If this scene is anything other than a furniture show-room, or a newly re-finished high-end apartment, then it’s lacking the lived-in feel. Scuffs on the floor finish from people walking around. Dust on horizontal surfaces. Dents on corners and edges. Scratches and scuffs on flat surfaces. Built-up grime that’s impossible to clean out of cracks and crannies. A few stray cobwebs and a dead fly or two on the windowsill. Crumbs and tiny smears of cheese from the wine and crackers. Grease marks on the arms of the upholstered furniture from hand oil. Sweat stains on the leather furniture. pictures and posters hanging slightly crooked. How far you go into all of that depends on what kind of a space you are photo-realistically simulating.
You’ve already gone a little ways toward this by putting the throw-blanket on the couch (though if it was thrown carelessly on, it would be over the pillow and bunched up against the wall instead of tucked in.) and the slight bends in the hanging bulb socket wires. So maybe this brand-new high-end showroom feel is what you’re going for, and if so, you’ve nailed it! But it feels unreal to me in the same way that a showroom feels unreal.

All that is style though. The only really objective critiques I have are that the bendy-lamp on the left looks too flimsy, and that the stools shininess clash with the bumpy texture.

You could always add more detail of course. Feet on the bottom of the stool legs and table legs. Some objects in the glass-front cabinets. More clutter or narrative objects on the tables and desks.