Interror scene with a story 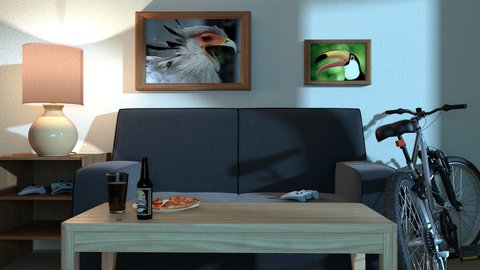 Hello. For the rest of this year I have decided to do some small 1 month long projects. I’m hoping that by the end of the year I can undo my lost skills from my 2 year hiatus from CG. It’s true, if you don’t use it you lose it! Although, I wasn’t that great before anyways.

For this month, I wanted to make 1 photorealistic still shot. I know I’m a little late to the ArchViz party, but my original intent here was more to tell a story. The idea I set out with was something similar to this picture. The idea was to have a nightime scene telling the story of a bachelor having a late night by himself playing Xbox, eating pizza, and drinking beer. The light on in the kitchen is to suggest that he’s getting something. Also, I thought it would be cool to have a cool color on the bottom left from the TV, and a warm color in the top right from the kitchen, to kind of give contrast to the composition. As you see, the lighting sucks bad. I didn’t model everything yet, because I want to get a basic idea of composition and lighting first, so I don’t get bogged down in modeling details that will never be seen. Also, most materials are basic, or non existent at this point, for the same reason. This is my first time lighting a scene in Cycles.

Here is another attempt at lighting and composition. Another version with translucency on the lamps 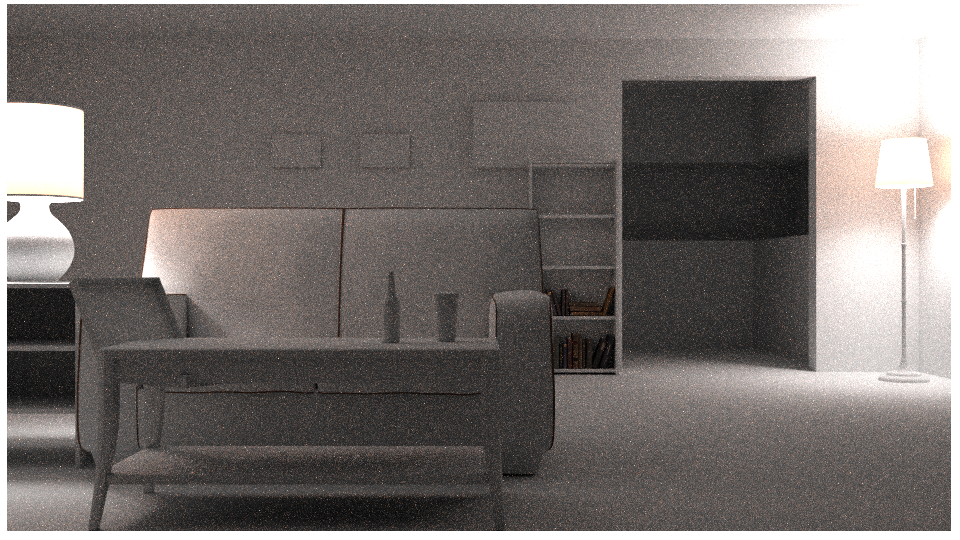 I wonder if doing a nighttime scene might be a little advanced for a first attempt at cycles scene lighting. So I tried a daytime scene where the blinds are shut, because the guy is just hanging out at home in the dark. Then I tried to see what it would look like in day/morning with the window open. So far, this one looks the best, but it still is bad.

I had some nightime shots with the lamps on, but I forgot to save them. I don’t have time to re render and upload them at the moment.

the reason I wanted to try lighting before I finish modeling, is because I don’t want to put unnecessary detail.

Here are some of the models I made for it. 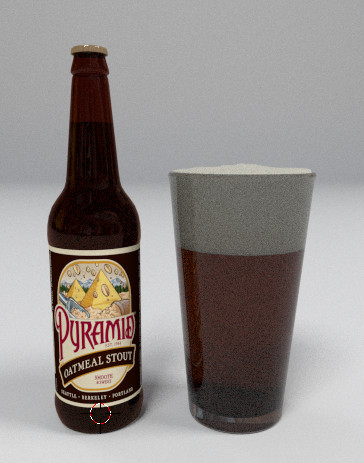 A model I made previously, that I may or may not use in the scene. 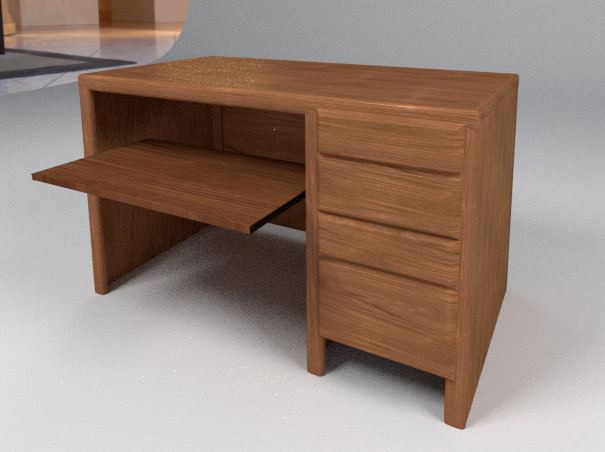 Another one of a keyboard

So yep That’s it.
With the exeption of the desk and keyboard, I worked on all that since July 1st, for about 5 hours a day. I don’ think that’s fast enough. That’s 60 hours (Not counting my 8 hour days on Sundays and Wednesdays) and that’s all I have? I need to get better, and faster. I still have 19 days left. I’m hoping I can get this to look good.

Any critiques, criticism, or suggestions are very welcome!

After my 2 year hiatus, in which I though I didn’t want to do CG anymore for various reasons,(the main one being that I have low confidence in my artistic ability) I have decided that I do infact want to do this. I’m decent, but I’m not good enough. I decided for reals that CG is what I want to do with my life back in November, but it wasn’t until last month, that I was able to hammer out a schedule that allowed me to work on CG for a decent amount of time. So even though I work 40 hours a week at a crappy job, I found a way to get 40 hours of CG a week in. I am serious about this. I want to succeed. I need to put in the time, and the effort. I’m sure most of my stuff will continue to be mediocre, but if I keep doing 5 hours a day, I should get better at a noticeable pace. I hope by the end of the year I can have a decent portfolio. If not, I’ll just keep hammering away.

Anyways, sorry about the rant. I just really want to get better, and I will really appreciate any critiques or criticism you guys have.

The individual models look pretty good I think. Your getting what appears to be some texture stretching on the couch back (left side). I think your desk would benefit by adding hardware that actually allows the keyboard shelf thing to pull out.

The books look good on the book shelf, and seem to have a good amount of variation. Your light sockets and surge protector look great. The keyboard came out real nice as well.

I’m hoping your curtains are kind of a stand in, if not, I think that is a big weak link. They could definitely use some more love. Window jams should also be added.

Look forward to watching your progress.

Thank you. I see what you mean about the texture stretching on the couch. I think that is just the way the texture rendered at it’s resolution. Sometimes it looks like warping arches. I know there is a word for this. I’ve seen it in photos where there is a square pattern. You’re right about the desk shelf.

Oh don’t mind the curtains. I did those in 2 minutes, just so I can get a basic shape for ideas, and lighting. I don’t even know if I want curtains. If I do, I will most definitely use the cloth sim, to get them looking right.

I’m having trouble knowing where to go with this picture. I’m also starting to get bored with it, and want to move on to something else. But I will finish until the end of the month. That is what I decided, and I need to stick to it. I’m considering just modeling a bunch more assets for this week, and worry about lighting and composition next week. Only, doing so, I risk wasting time on models, and detail that will not be used or seen. But again, if I worry about composition, and lighting too much in the beginning, I might end up making a bare scene, and say to myself “That looks good” when if I had more models it would be even better.

Modeling and texture look great. On some of the renders it appears that your focal length is too low. The couch especially is badly distorted. Try selecting your camera and in the object data increasing the focal length from 35 (default) to 50, 70,100 … Looks really nice though.

Thank you Photox. I tried increasing the Focal length to 50, and that looks way better.I’ve been really busy this past week, so I didn’t get to work on this as much as I was hoping. One thing I’ve definitely learned (I’ve already known this, but it just reenforces it) is that planning is VERY important. I spent most of my time fiddling around with placement, and lighting, not knowing what I want. I think I’m going to finish this last week trying to get this camera angle working good.Here is a pizza jd1ij6R.png1327×1307
I was having trouble getting the peperoni texture to look right. They need to be darker, and have sharp white shines. vEsNjSw.png1920×1080
Here is where I am in terms of composition. I spent a few days trying to get lighting to look good, by having a blue coming from the TV, with some warm lights coming from the lamps. I’ve tried different room setups, different lights, but they never looked right.I’m not too happy with how this is turning out. I need to plan more before I start, and cut down harder on distractions for when I do get to work.There are some obvious problems, such as the top part of the tall lamp being absent, the picture frames need changing, and the scene needs more detail. I think I will keep this camera angle, and focus on adding detail, and playing with lighting more.
Scotchtapeworm (Scotchtapeworm) April 25, 2018, 7:42pm #6

Here is another test render. On a side note, I’m really interested in your approach to improving this side of your life. I find that I’m at a crossroads in my life as well and have been wanting to make a transition. This is inspiring stuff for me! Keep at it, with this kind of determination you’ll be sure to succeed!

The objects and all the details you made are really good. I imagine you’re not quite sure yet the frame you’re gonna use but if you decide to take de first point of view, the curtains could need more love and attention since they are a central part of the frame.
I really love your pizza and the books, and the electric stuff… the beer also is good.

XRayGunner, I’m happy I can help inspire you. I’m just sick of the way my life is going right now, and I need to do something about it. As much as I want to hang out with friends, and enjoy the summer, I think about the life I want to live, and once I get there I can be successful, and feel no guilt in leisure. But until then I need to work on my goals so I can get out of this crappy day job that hardly pays. I just need to keep pushing forward. A struggle for me is cutting online distractions. I downloaded a trial version of “Anti-Social” I can block facebook, reddit, youtube, or whatever else wastes my time online for a set amount of time. I will buy it for $15 here in the next day or two.

Sol_33, Thank you about the objects. I actually decided to use the last frame for the camera angle. So I don’t think the curtains will be in the shot.

I adjusted the pizza material to use translucency instead of SSS, this way I can stick to rendering on the GPU. I thought maybe a moonlight might look good, to lighten up the right side. I might still test different lighting setups. but I think lighting is my weak point. I will definitely change the smaller bird picture. I don’t think green works with this image. I might want to stick with blue/orange. I might change the subjects too. I just picked placeholders, and I thought the birds were cool. I also need to figure out what kinds of details I am going to put in it. Should I do more modeling for smaller objects?
bottle opener, books, games, wallet, phone, keys etc to decorate the scene with? Or should I focus on dirtying up my materials to make them more realistic. I’m off today, so I can work on it, and I can work on it Monday and Tuesday in the morning. Wednesday I am off, so I can work on it then a decent amount of time, and that’s when I need to be done. I need to start a new project on August 1st.

This is where I am so far. Hi, can you show us the bicycle? It looks very well

Here is an update with some dust on a few of the materials. I think the couch’s dust variation is too small (noise texture) I might make it more subtle.

I also need to change the wall texture. It has too much detail. I should add water droplets to the beer, make the table more dirty with some stains, add some stains on the couch, as well as adding clutter to the nightstand. I might add a wallet, keys, and phone to put on the table.