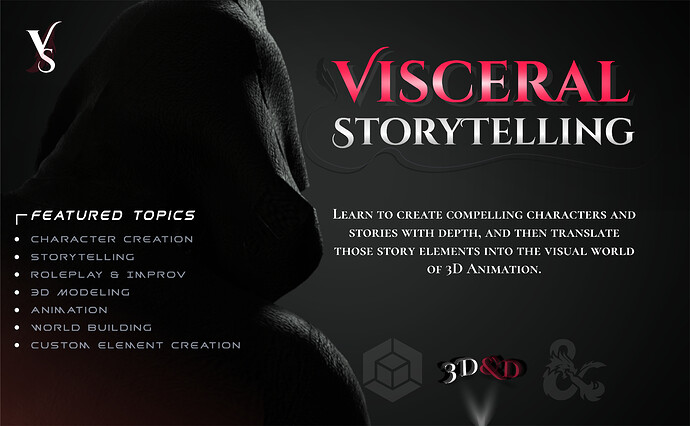 Hey everyone! Ryan (Owner) and Sean (Dev Director & Lead DM) of Heleus here! As we look to expand more into D&D in our discord, we are launching a series of completely free live classes, called Visceral Storytelling, which covers a widespread amount of areas within the combined topics of D&D and 3D Modeling, and we’d like to invite you all to come be a part of it!

Essentially what we’re doing is breaking down D&D into its component elements, discussing each of them individually and in depth, and then following up in the next class by bringing some of those concepts or elements to life with 3D Modeling and Animation.

As an example: Our very previous class was an Intro to D&D & Character Creation, during which Sean (who is heading up the D&D side of things) discussed the need to knows for a new D&D player joining a campaign and what’s involved in creating a well balanced character, as well as what steps to take and what details to sort through, while attempting to develop a detailed, convincing, and intriguing backstory for your character.

Following up that class, this Saturday at 7PM EST, Ryan will be doing an intro to 3D Modeling Class, and then the following week he will be taking the character created during Sean’s class, and showing how to efficiently translate that character into a lifelike 3D model. This will include, base modeling, detailing, hair design, clothing design, and texturing, as well as talking about some of the nuances and clarifying some of the concepts that confused him when he first started modeling and animating.

The classes will likely happen weekly for the most part, and will probably last upwards of a year. The goal is to help our attendees, whether they be D&D Players/Dms or aspiring 3D Modelers/Animators, develop an understanding of the workflow process, a deeper appreciation for world creation, and ultimately create incredible, intriguing, and visceral stories, characters, and environments.

The class is completely free of charge for anyone who watches or attends live! Most likely, the finished product will be compiled into a course and uploaded to Udemy, but portions of the finished course edits will be made available for free via our YouTube channel.

So if this interests you, or portions of it interest you, feel free to either watch live, via our YouTube channel linked below, or participate in the live class as a part of the stream and ask questions, via the Discord link, also included below.

And for anyone interested, here is the current course class list. This may have minor changes, but will give you a pretty good idea of the topics we’ll be covering. Some topics will be split up into multiple classes.