OK, when I try to set up an Inverse Kinematics it gets all messed up.
I’ve got no idea whats going on. I’ve looked at some tutorials and my problem simply doesn’t occour in them.
Here is some screens and a blend. 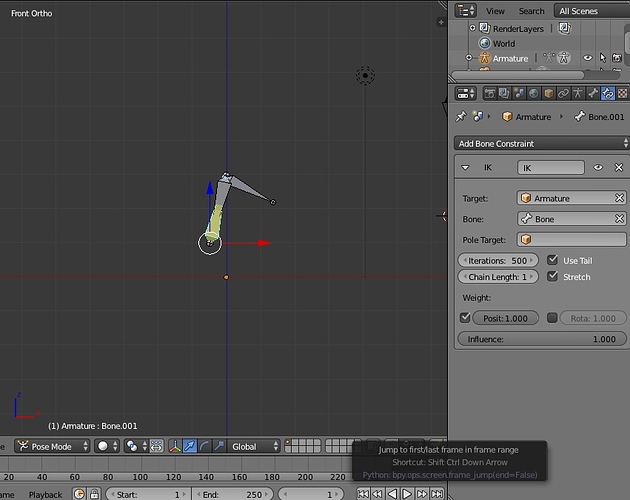 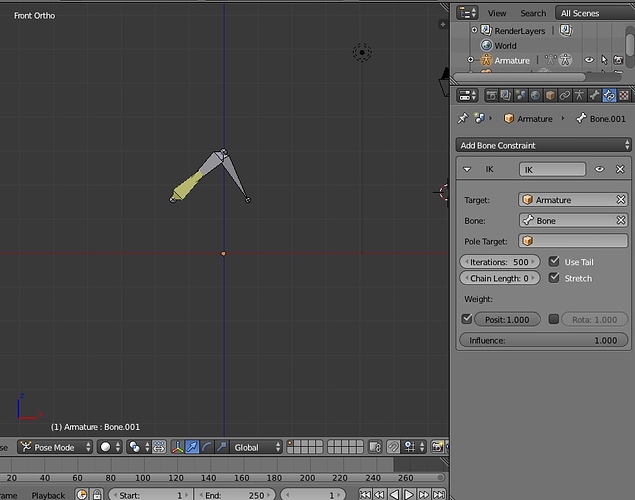 I found two things that weren’t set up correctly:

Keep these things in mind when building IK chains:
(This may or may not make sense right now, but it will eventually) If you want to be able to move your IK target as part of the entire armature, build a root bone, then make the IK target and the first bone in the IK chain both children of the root bone. The hierarchy will look like this:

And also, count you set in the IK Chain Length always includes all bones beginning at the IK pivot (the shoulder if it’s an arm, the hip if it’s a leg) to the bone that points at the target (the forearm in an arm, the shin in a leg). This number is inclusive. That means if your arm or leg is a standard human arm or leg, the count will always be ‘2.’ If your character (for whatever reason) has two elbows in a single arm, the count will be ‘3,’ three elbows and the count is ‘4,’ etc. Same for knees.

Hope that clears things up for you.

Another tip: Give your bones meaningful names; it’s easier to keep track of what they’re supposed to do.