Hello all,
I was commissioned to do a proposed design for the iPhone 2 for a magazine article. This saw print many months ago before the the release of the iPhone 3G. Textures were done in Photoshop and everything else was done in Blender. 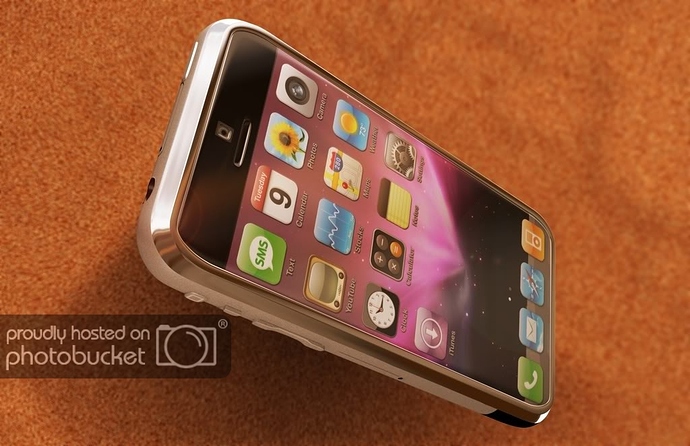 The render for the magazine was for 17 inches by 11 inches at 300 dpi. Blender handled the task admirably. This was my first time to use Blender in a professional job. I am now currently using Blender for almost everything I output in 3D. I’ve been playing with it for years. There is just no reason not to use it anymore. The past few years in development were just phenomenal.

Here is a back view. The article proposed many colors to the fictional iPhone 2. Along with a slot for an SD card, cameras on the front and back, and a larger screen.

Nice.
say, where is the Home button?
before the iphone 3G , man I think apple need to call you for any next iphone/iPod touch.
ok as for the render, i will not say coz you may go like this = :mad:
very good model, texture and lighting.
if i was the boss of that magazine I will say to you:
there you are i was looking for you all day, where are the iphone renders? _____ Hoh! done gave me look,
they work fine , Mike! ____ take the render add them to the magazine print out, if we had more time
i ask the artist to tweak it more. good job, see.

any way thanks for posting.

Hi fahassani, the home button was relocated to the side. It’s quite true, publishing moves very fast, I often have just a few days or just one day before completing an assignment.

There were a lot of things that I wanted to improve, but only so much until the deadline. Have you worked in publishing before? You seem to know how it works

. Thanks for your comments.

I suggest upping the contrast of the image of the screen. It looks very greyed out.

Extremely professional looking. Glad to see Blender used in this way. My experience is clients are very happy to get Blender work if they can’t tell the difference with 3dsMax (apart from the lower price of the work, that is ;-))

@Makin Bacon - It might be that my color corrected monitor is playing havoc with my JPEG attachment, the background should be bright orange, if it’s not then the JPEG has been outputted with a printer profile, sorry. I’ll try attaching a non printer profiled one.

I don’t tell them what I use, they just expect the finished product. I usually use Lightwave or Maya. Actually I used to. I’m thinking of migrating my whole production to Blender. With maybe a foray to Zbrush, as soon as I can afford it. They finally came out with a version that’s compatible with my work machines.

Thanks all for the comments, much appreciated.

Looks very nice. The phone is well modeled and rendered.

However, I’m skeptical about the background. Both style-wise (I guess it’s a matter of taste - I’m not much for the brown/orange color) and technically, since the texture looks way too low-res compared to the rest of the render. I’m not sure why you have chosen to leave it like this, but I guess it’s a minor issue after all.

Hi The M.h.p.e., you raise a good question. The camera angle and positioning of the iPhone was done in conjunction with the editor of the magazine. The areas around the phone are dead spaces where text and other images were placed. The editor then chose to have the background lightened some more and almost totally removed. I think they finally went with a totally white background where the article, and its header were flowing around the artwork itself. I chose to post the first approved render here, since the succeeding one was quite boring, with the iPhone just floating in a white area. Thanks for the comment, glad you liked it.

This was the final image used for print. The background was in another render layer, so I had to do a quick re-render, I used Blender’s internal renderer. Looking at my old blend file, I rendered out at about twice the required size and then resampled it to the required size so I could get antialiasing. Some artifacts remained though. Just with the background removed, the editor didn’t like orange as well, but it was something that was explicitly requested at the start of the project. I believe I was given two days. Sadly for most projects in print, that’s about the average time you can look forward to, to prepare.

very nice, but u need more reflections on the main screen!

Hi fahassani, the home button was relocated to the side. It’s quite true, publishing moves very fast, I often have just a few days or just one day before completing an assignment.

There were a lot of things that I wanted to improve, but only so much until the deadline. Have you worked in publishing before? You seem to know how it works

. Thanks for your comments.

@Gleb Zorin Thanks for the comment, I had reflections on the screen, but due to editorial changes, they wanted the interface to be more prominent.

nice, always have to please the client though :’( even when they’re wrong. You should do a new render for yourself, an accurate one.