I observed and learned preliminary sculpting from a YouTube video.
An example of a regular tearing of a page from the centre is attached. 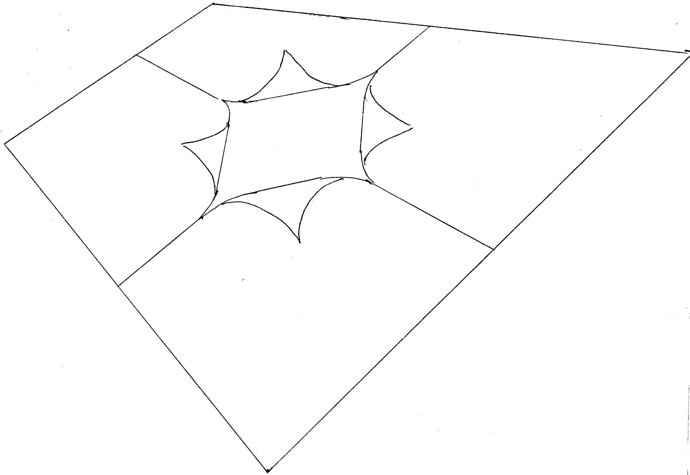 I want to have a page torn up irregularly, but without altering the total surface area, from the centre. The page will not be shred into separately torn pieces, but will remain unaltered at the periphery. Only the centre is affected.

The irregularly torn page will have a picture mapped. The resultant output will be analogous to a real photograph paper torn similarly.

I hope I have been able to explain myself properly?

How to achieve this effect? Could you please help me?

Thank you. Sir. I hope I shall receive some support now.

You wrote a PM, answering with more specific suggestions here in case it’s useful to anyone else.

I think that cloth sim would be worth trying for this. How I would start would be with four heavily subdivided planes. I would add vertices that formed the maximum edge of the rip to a vertex group for pinning, and then create four extra vertices in the directions of the rip, create edges running from the inside corners to the new vertices, and assign the new vertices to the pinning group. Then it’s a matter of enabling cloth physics, enabling pinning and giving it the name of your pinning vertex group, enabling a low sewing force to pull the corners toward the new pinned verts, and playing with parameters like structure to get it looking like you want.

Sir. I am grateful for your advice.
Sir, what you have written about the four planes is for regular tears as shown in my drawing.
Can’t one plane be multiply cut and sliced from the middle and twisted, without altering the surface area of the cloth, to reflect an irregularly torn page, as if a hole has been punched through its centre?
Thanks and regards for replying, Sir.

Yes, I just saw the thread: [Addon] ClothFX($) Rip Apart Your Cloth!
I will contact the programmer shortly.