Is it possible to make something like this with blender?

I think I tried almost anything using modifiers like splitting a plane into quads with split edge and then adding a fat solidify modifier and after that a displace modifier, but the problem I keep running into is that you can’t use the displace modifier per face. It’s only per vertex. I also tried a particle emitter with long cubes, but I didn’t see any options of changing the height of the particles using a texture or anything similar to that.

So do any of you guys have any ideas about how to do something like this?

EDIT: Alright, so I was able to get the pretty much same result. What I would like to do now is do the same thing using a Sphere. Is there any way to displace whole faces instead of vertices? 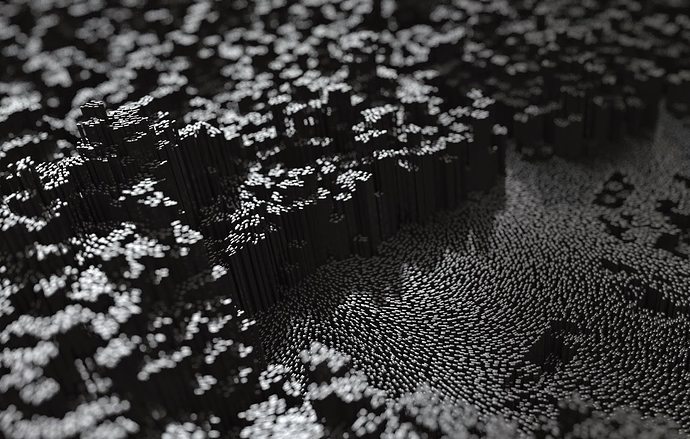 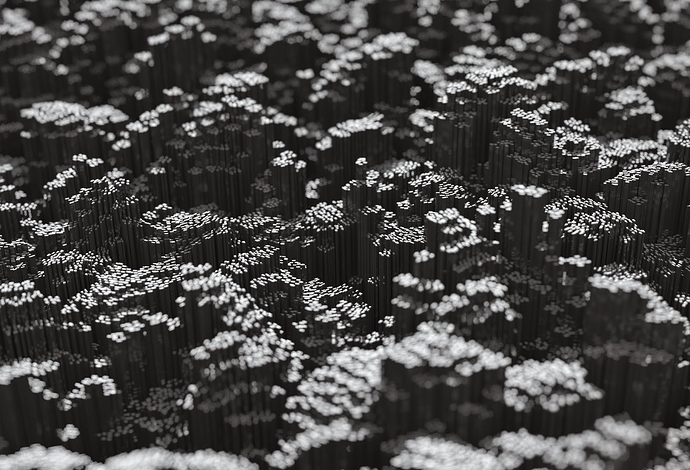 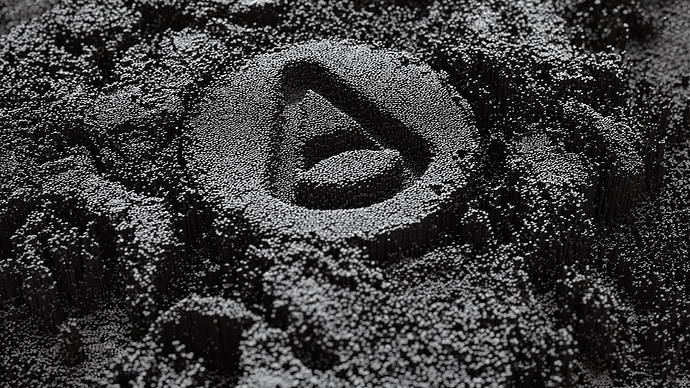 Correction: You are right, it is possible by setting the Z to 1 and Normal to 0 in the Velocity settings of the Particle Emitter: 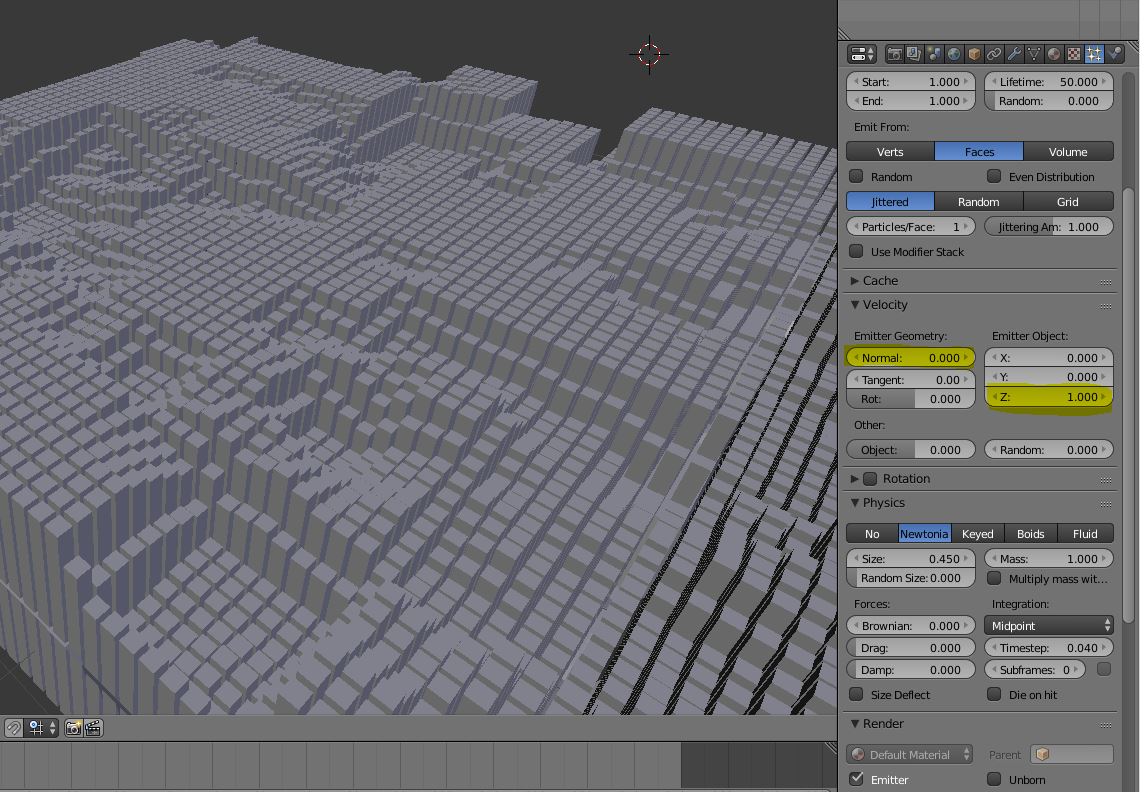 However, a problem arises when you try to do the same with something that is not a plane, and that is because the displace modifier is applied per vertex and not per face. Thus faces are being distorted and stretched, instead of being displaced per face, like so:

On the left is the displaced plane, which is being displaced per vertex, which still works, as shown in the previous image. In the middle is how it should be done(notice the faces being on different heights) and on the right is how it should look like on a sphere. I would need to displace the faces of the sphere separately, because you can’t add a Particle Emitter and have it rotate the particle objects based on the Emitter’s normals, because the displace modifier distorts the faces. You also can’t rotate the particle objects along the Z axis, because then they all point upwards.
Cherryman (Cherryman) April 29, 2018, 8:41pm #4 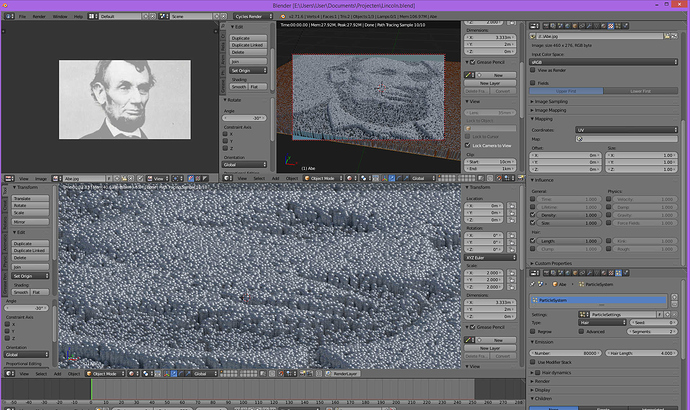 I tried it with a picture and hair.

Not sure how to stop the overlapping, but i’m sure if you can make it.

Edit: I see you already found it. ANyway… it was a nice practise.

This reminded me of a tutorial I ran across a few days ago using dupliverts… hope it’s useful: https://www.youtube.com/watch?v=99t4wsU-UMI

I tried it with a picture and hair.

Not sure how to stop the overlapping, but i’m sure if you can make it.

Edit: I see you already found it. ANyway… it was a nice practise.

Yes, and the problem still persists if you use anything but a flat plane.

This reminded me of a tutorial I ran across a few days ago using dupliverts… hope it’s useful: https://www.youtube.com/watch?v=99t4wsU-UMI

Thanks for this, I was hoping it would solve the problem, but the vertices get rotated as they are displaced, so the problem is still there(for anything but a plane ofc).

Aha! Got it! If you actually delete all of the faces and edges of a sphere, only keeping vertices and use the displace modifier on it, the vertices don’t get rotated and I am still able to displace them along a normal and then use the particle emitter on them. The only problem now is that I can’t subdivide the mesh further using a modifier, but no worries.
Result: 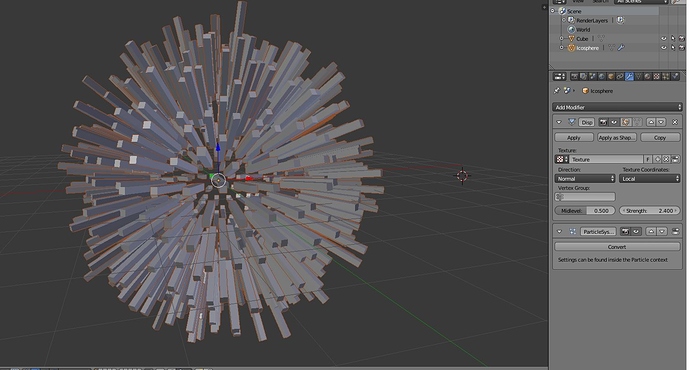 So this is what I was going for: 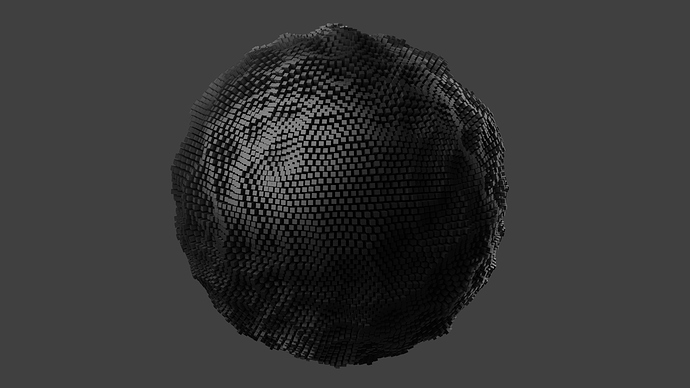 my first thought is yes but it might be laggy with certain hardware.