is it possible to use a lamp as part of an object?

Okay I am trying to do make the interior of a cylinder glow, like say for a glow stick or something. I’ve looked around on the net, for tutorials about doing that. I haven’t had much luck, then I came up with a idea: Can you use a lamp as the source of the glow? and by doing that make it appear that the interior of the cylinder is glowing, or is there another much easier way of doing it?

You can put lamps in things, but with the latest versions it’s real easy to get a nice glow effect by enabling ‘indirect lighting’ in world buttons, and giving the glowing material an emit value. BTW if you would prefer putting a lamp in an object, look into translucency, as well as the transparent shadow option in materials. I would go with indirect lighting for a glow stick though.

But there is one problem. It is not casting shadows. Where is the setting to cast shadows?

But there is one problem. It is not casting shadows. Where is the setting to cast shadows?

The button is available in the distant future when BI get’s recoded. Indirect lighting is nice for some parts, but overall a “fail”. Only works with approximated, and it also does not show up in reflections.

To make stuff glow, I´d a pointlight without raytracing to do the light, one smart placed light only casting shadows, and run it trough the compositor with a glow node.

and wheres the world buttons? The new version has jumbled stuff around.

and wheres the world buttons? The new version has jumbled stuff around.

A little bit of effort can go a long way. Have a guess which of the buttons is the world settings. Maybe the one that looks like a world (basically the same symbol as in earlier versions of blender)
http://wiki.blender.org/index.php/Doc:2.5/Manual/World

With the indirect lighting you only will get that the object emit light. For the glow effect, the halo effect, you should play with some nodes in the compositor: 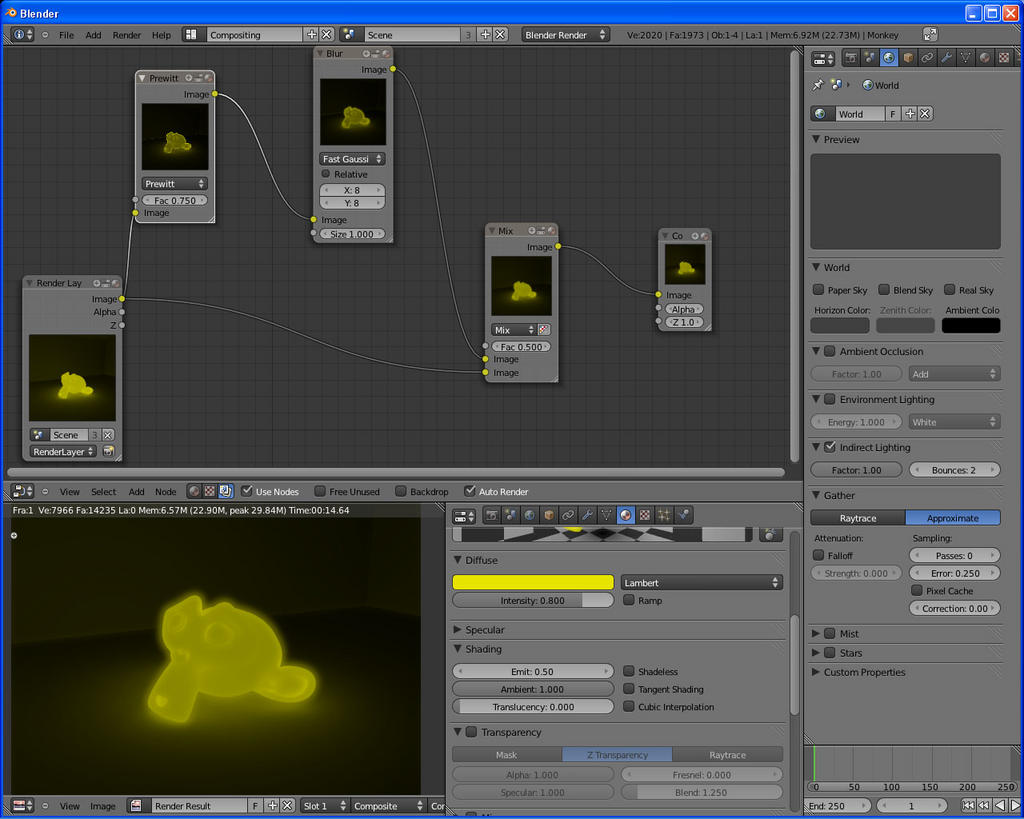 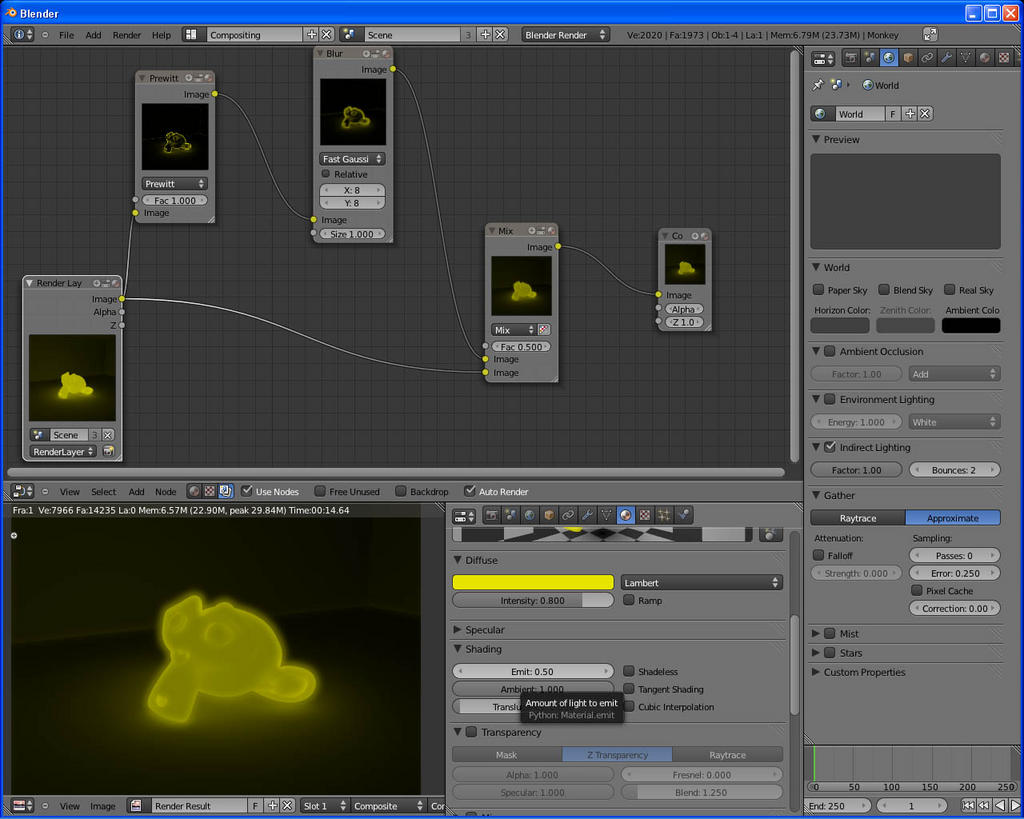 Regarding the shadows if it is with the Blender engine, I’m afraid you’d have to emulate it with a light only for casting shadows.
Other method could be using Yafaray or Luxrender, they can make lights from objects that cast shadows.

http://www.blenderguru.com/ has a tutorial named “Create an Underground Subway Scene - Part 1” about 35min into it he deals with creating light globes in exactly the way your looking for I think.

The approximate GI solution in the Internal Render is really only useful for some simple tasks, it was originally added as a possible way to have GI in the old internal engine, but was abandoned because a complex scene would need many hours in a pre-processing phase before it even began rendering. The biggest drawback to the BI engine (and a dealbreaker for some), is that a lot of features have to be used in an isolated situation because they simply do not work with each other, and fixing this is not trivial because the render code is a mess and full of hacks.

However, the good news is is that Brecht is developing a new engine, based on a modern, clean codebase, that attempts to combine artistic freedom with realistic rendering, the new Cycles engine (being developed in the Cycles branch with ultra-tight integration into Blender), allows GI, caustics, and mesh lights without all those limitations (it’s still incomplete and is missing a number of things that BI can do like volumetrics, but getting those coded is planned). This is currently the engine that may end up replacing BI altogether as for one thing, it is backed by the Blender foundation itself.

In the meantime you can download the Luxblend and Yafaray addons for 2.5 and have a go with those engines as they both do what you want.