I’ve created a model for animation, and added three UV spheres for eyes and a wolf nose, as well as a cube modelled for a tongue.

When I actually merged the image to the bones, the extra items disappeared, and when I moved the model around to find them, they behaved very strangely, as though they were locked into the background no matter how I rotated the scene.

Being a newby, I don’t know if I need to do something else, or if it’s a bug.

Here tis, but it’s a bit rough, remember I’m a newby at this please.

This only has one sphere, but the other model has the objects embedded in the body, and it’s difficult to move them.

I’ve fixed that particular problem by appending the wolfs body with a new human rig to a new file.

However I’ve noticed another hassle with this new model. When I move an upper arm, his lip distorts, and when I move his legs his toes distort. I haven’t got the foggiest what I’ve done wrong, let alone how to fix it.

I’ll append the file, so any advice please?

Oops, can’t append, cause the files too large, but the previously posted model does it too.

Oh, you’re noobie? I couldn’t tell…lmao :rolleyes: Sorry to joke. Got quite a few things wrong there. I don’t really know where to start…

1st, in the outliner window, in the menu bar, change it to ‘all scenes’ (circled in red in screenshot attachment) so we can see what is going on.

Part of the problem is you have 2 armatures according to the outliner. (circled in yellow in screenshot) The first armature - ‘armature’ in the outliner - doesn’t appear to be there. Looks like it was created, then everything was selected in edit mode (all the bones) and deleted. So in object mode, you can select ‘armature’ in the outliner, move the mouse to the 3d window and delete it with the x-key. Now the 2nd armature - ‘armature.001’ - has apparently been duplicated in edit mode, because you have 2 of every bone. See the screenshot, I’ve posed the arms so you can clearly see the 2 sets of arms. You see, one set of arm bones is trying to deform the mesh when posed, the other set that hasn’t been posed is trying to keep the arms in the original position. At this point, I don’t know what to tell you. I think it might be best to just scrap it and start over.

I actually think the best advice would be to delete the 2nd armature. Select the mesh in object mode, in the properties panel, select the object data panel (the icon that looks like a triangle) find the vertex groups panel and delete all vertex groups. And remove the armature modifier if it is still there. Then I would try following this excellent tutorial -
http://wiki.blender.org/index.php/Doc:Tutorials/Animation/BSoD/Character_Animation
Starting at the rigging section. That tutorial was written in the 2.4x series, you might find it easiest to take your model into 2.49b and go from there. This way you could concentrate on the tutorial and wouldn’t have to fight the differences in the UI between the 2 versions.

Whew, I didn’t mean to write a book about this…
Randy 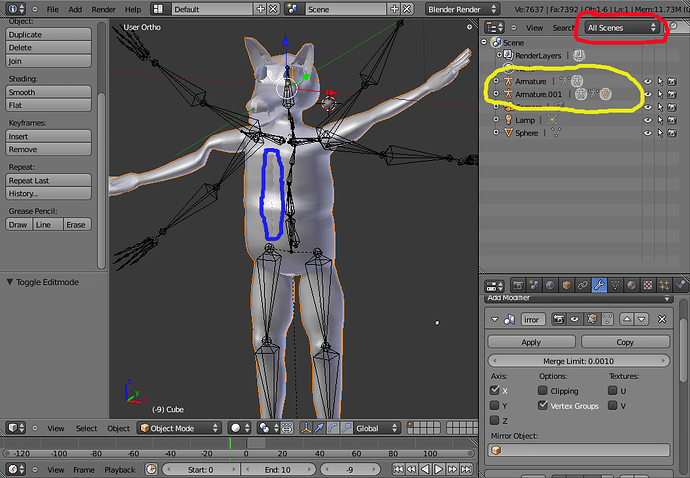 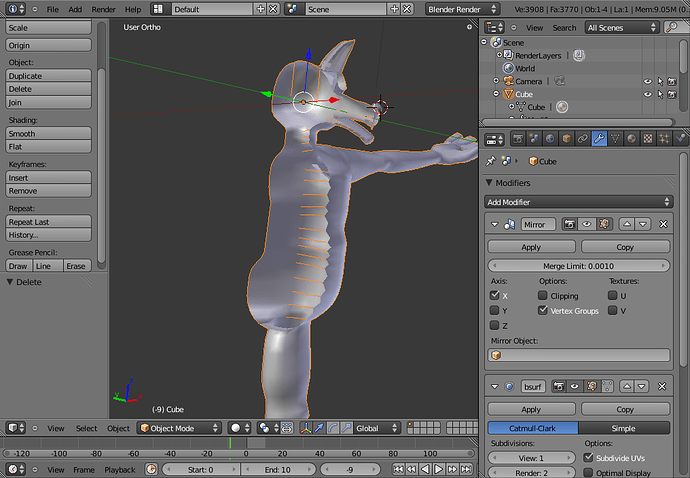 G’day, and thanks Randy. Sorry to take up so much of your time, but I’ve bitten the bullet and started over again.

I’m confused. When I added a human bone rig to my new model, it automatically added two rigs the same as I had before. If you delete one, they both disappear. Yet as Randy found, once they bones are merged with the body, the bones act separately. Is there a fault with the rigs, or is there some special way of using them?