Did the famous blender guru lightbulb tutorial, and now trying to use it in a table lamp i made as a way to actually light a scene, and its the only light in the scene except for an HDR that’s turned way down, and the ambient occlusion is off. I have the ‘light path’ node on the glass material and im using the ‘is shadow ray’ as a mix factor between transparent and glass shader, which appears to make an improvement on the amount of light getting through the glass bulb…
Point is, is this going to result in light bouncing around inside the bulb, rather than my scene, and does anyone know any other tricks i can use to make the light be effective but it still look like a real lightbulb?

At least to my knowledge cheating works the best here: Don’t try to create a real “working” light bulb, use some point lights or an invisible object with a emissive material for lighting your scene.
In your case: light the scene as usual with invislible light sources and create a emissive object inside your light bulb so that the bulb itself is lit - you may add some glow effect in the compositor later to make it look better.

It’s not going to be trapped inside, but it’s not the way to light a scene. That tutorial was all about modelling a light bulb and have that be the subject. In order to get those details inside the bulb with the glowing filament and all, you’d have to turn down exposure on the camera significantly, resulting in the scene not being illuminated at all. Just try photographing a light bulb where you expose to capture the glass/filament details.

The best way to simulate a light bulb used for scene lighting is not to simulate it at all. Instead, add a couple of spotlights going up and down for the unobstructed view, and add an emission shader texture to the lamp shade itself. Sure, you can do this brute force relying on translucent shaders to retransmit the light from an actual bulb, but expect tons of noise and/or very long time to get clean renders. The setup shown below takes longer time to setup, but it’s much easier on the rendering time, making it much better as a general purpose lamp: 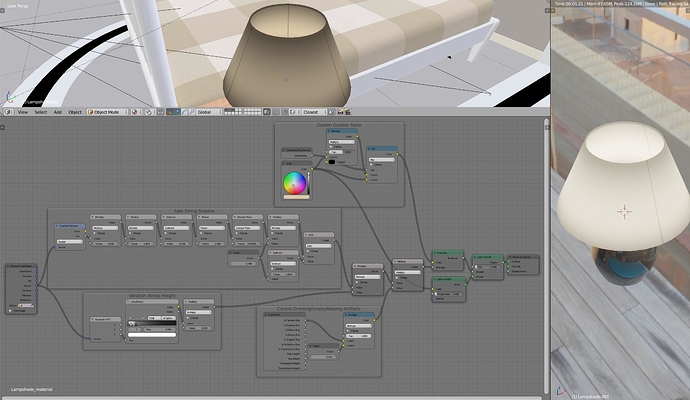 If you have a light bulb in there, you can make it camera visible only, make sure the base extends enough to cast a shadow from the spotlight pointing downward. The spotlights should be about the size of the actual light bulb.

Thanks for the interesting replies.

Yep - cheating is best. If you are trying to light a scene through a transparent or translucent material - you’ll probably end up with a lot of noise.

I did an experiment on something similar a while back in another thread: Hi, I’m trying some lighting ideas out, in particular a diffuser but I had some issues creating a transparent face for the front of the unit. I’m looking for a material to put on the front of this… …that is semi-opaque to spread the light and...