Last night i had a strange dream about being trapped on an island full of mercenaries, which gave me an idea. Why don’t i make it into a game using Blender or possibly unity?
Now i know what your gonna say ‘Its already been done - Farcry Instincts’. I have played that game and loved it but i want mine to be similar in the gameplay but COMPLETLY DIFFERENT when it comes to story.

I will post a revised story later on but here is the basics.
You and some friends you were holidaying with wake up on a tropical island with no recolection of how you got there. You gather your things but a troop of heavily armed mercs with jeeps storms down the beach and dnap your friends but you manage to get away and hide in the jungle. After a while of hiding you leave the jungle and return to the beach and head off in the direction the mercs went. Your aim is to find out how you got on this island and get you and your friends off it to safety in one piece.

Thank you.
P.S I tried to sound as professional as possible and hope i pulled it off

No you didn’t… but that’s OK, most of us are Indie developpers or hobbyists so no worries.
Making a game is not about having a good story or an innovative idea. It’s the understanding of visual arts and the mechanics of interactive media. Meaning it has to be interesting: nice to look at, fun to play; immersive: the player needs to feel involved, interaction must be though of so that the player knows that the fun in the screen is being produced by his actions!

Islands are very cool for games : a small piece of land (small open space) with natural boudaries. Most of us love it, so it’s a good start.
Plan your game with as much detail as possible, and the initial obstacles will be easier to overcome! It’s very difficult to go from an empty scene to a lush jungle scene!
Look around in the ressources section, you’ll find plenty of free models.
Good Luck!

Thank You for your input. I will be making a start on it tonight

An amazing underused collection of plants by BA user Dim: 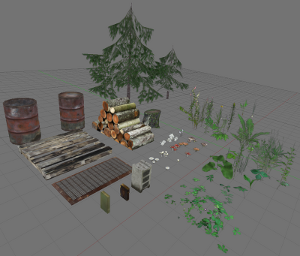 Dim's Arboretum. All in a .blend file. Original source:http://blenderartists.org/forum/showthread.php?t=131010 Personal communication with author: "All of those textures are original work, and I am releasing them with the CC Attribution 3.0 license"

Thanks for the link dmills. I’m currently working on getting a first person playerbox setup with mouselook and movement.