Issues with shading for normals baking

My problem is that my low poly model has a really crappy relationship with the smooth shader, and none of them want to make the first step to settle things.
When i bake, i get a normal that desperately try to fix the shading issue but don’t really succeed, i tried edge split and sharp edges, which fix the thing, but automaticly i get artefacts on the edges when the normal try to smooth them, which is normal.
I tried to retopo my low poly mesh in a lot of configurations and it just made the polygonals artefacts different.
When, by despair, i added an edge loop on the strong angles, it only reduced the problem, which makes me believe that my problem is at the base of the process.
A forgotten setting ? 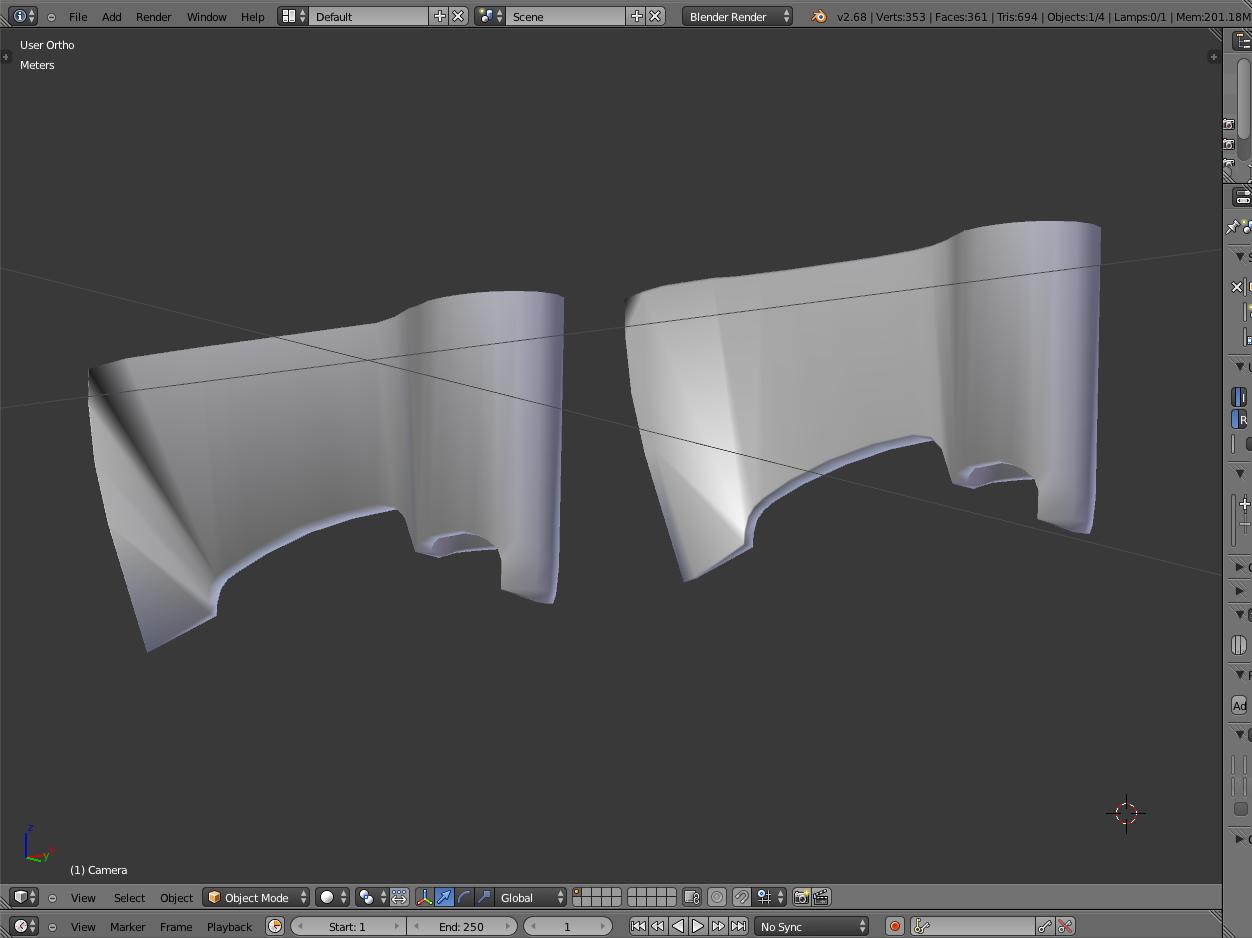 Have you checked and recalculated the face normals to ensure they are all consistent ?

Other than that the info supplied is not much to go on. Blend file ?

Yes i’ve check the face normals.
Here is a .blend with the meshes (not the same as the one i work on, which have other objects on it).

Your axe head has a lot of tris and n-gons (and doubles) which subsurf and baking won’t like, and it’s got not great edge flow. I had a go at retopoing it with all quads, while “watching” the world series. Hope this helps you out. 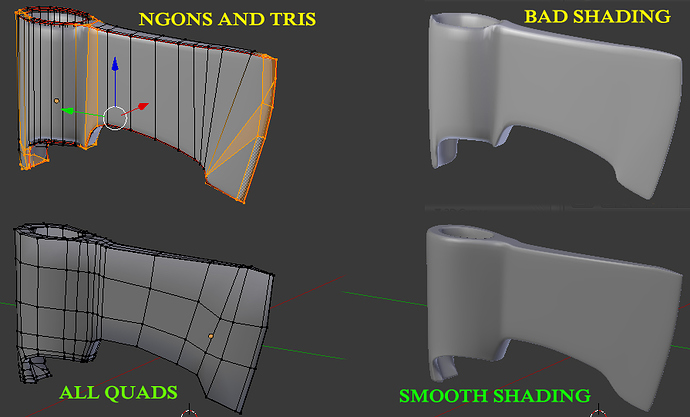 In addition to blenderallday’s warnings about tris and n-gons, I’ll add long skinny quads. You don’t need perfect squares of course, but the longer and skinnier your quads, the worse the shading will be. You can see this in your axe particularly just behind the faces at the front edge that blenderallday has highlighted.

Thanks for your quick response and your time.
Yes i saw right after the upload that i forgot a pair of Ngon . The problems were mostly on the blade so i totally forgot this part… it’s not my proudest achievment. For the double, you were thinking of the edge split on the sharp edge of the blade ?
Anyway, i looked at your model, the shading is perfect but the shape changed a lot and there is a huge loss of detail, that and the tricount is now twice as much as before. The model is meant to be rendered in real-time, the idea is that i tried to keep the tricount as low as possible (an optimum of <600 with the handle).
The destination engine is Unity, which converts everything to tris at the import and can use an auto-smooth feature (which, of course, can’t be used if i apply a normalmap), so the use of triangles wasn’t really a problem until i tried to bake normal maps. I wanted to exploit this to reduce my tricount, is there any way to do so ?
I’m not really a 3D artist, i’m doing this to give a hand, so i don’t even know if there is actually a way to keep my tricount as it were, i’ve never really looked into the normal baking before.

When i look at models from various games they don’t seem to have this problem, there are certainly not all these edge loops for example. Even if this model in particular is frustration-designed, i have to admit it, i really have a hard time to understand the difference between what i get and what i see with others models (excepted Tri and Ngon).
As an example, look at this axe : http://2.bp.blogspot.com/-Ki2o2RHMAyU/URG1_5IBA7I/AAAAAAAABHU/ffPF4dlNiEs/s1600/Axe_03.jpg
We can cleary see that there is a huge use of tris and the topo isn’t really square based. I can’t really afford to loose all the detail and spend 70% of the tricount on a shader-helper topology… that’s my problem.
Is there any solution ?

Again, many thanks for your help.

Doubles are vertices that are directly on top of one and other, you can’t see them per se, but after a bunch of modeling you always want to remove doubles to be safe.

Had another go at a low poly version of the axe head, this one has a vert count virtually the same as yours (see image) , all quad, and no poles even. I baked a normal map of a high detail graphic graphic. It’s rendered with cycles. Let me know if you want too look at the model, and I’ll post it. 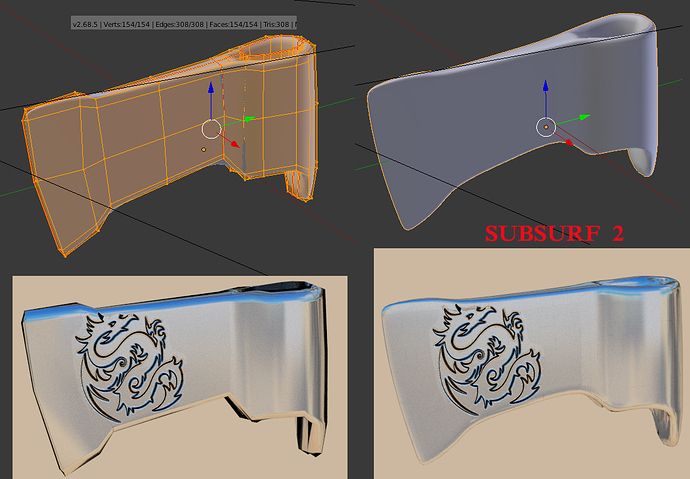 Thanks blenderallday.
I’ve reworked the model and came to an acceptable compromise. I have 654 tri with the handle and the shader isn’t glitched enough to prevent the normal map to give a flat rendering. I kept the long polygons design but made some edgeloops on the 90° angles to split them in two and get closer to the shape that the normalmap is supposed to render.
It isn’t perfect technicaly but the rendering fully textured (diffuse + alpha channel specular + a normal map combined with a bump via CrazyBump) is fine in a first person-like distance so … i’ll stay with it for now.
But i still don’t understand how i am supposed to bake normal map for a simple 6 faces cube and get smooth edges which aren’t glitched…

Anyway, once again, thank you for you help.