Good evening (or day, or night, depending on where you’re from

). I’m here to show you my latest creation: Jamais plus ne demeure. 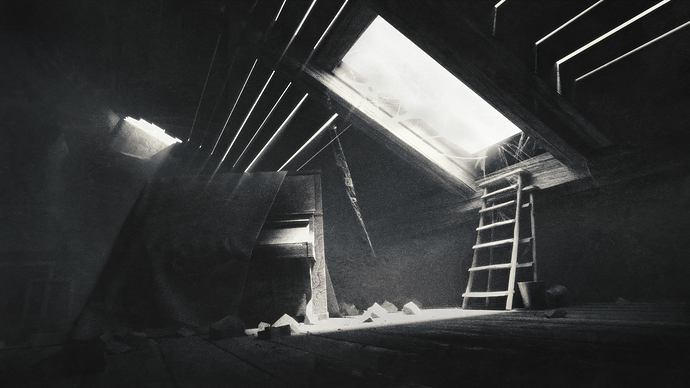 For those of you who wonder “what the heck does that even mean?” it’s french. I chose a french title because, well, I’m french… Alright there’s another reason, I put a lot of thoughts in this title, as well as a lot of work in the image, and I wanted something that really tells the feelings I put in this production, and I don’t think I can translate it in english, it would loose it’s “power” so sorry but you can always go on wordreference if you want to now the meaning

The image speaks also for itself I guess, it’s about abandon, forgotten things and past tragedies.
(what a jolly way to begin the evening)
Joke aside, it took me a little less than two months to obtain this result. Of course I didn’t work fulltime on this, just here and then, when I had some time. For the technical part, it’s rendered at 200 samples (There’s a thread about that in the focused critique section). I chose to keep Cycles noise and reduced it a bit in photoshop afterwards. The reason for that is that the lighting was simply better, can’t explain why but there was an overall felling of “Yup, that’s what I was lookin for”.
I modeled everything, with sculpting on top of some objects, but you can’t really see the modeling quite good so … joke’s on me!
Before I let you reach the end of what’s slowly becoming a novel, I wanted to say that I was mainly inspired by two things: the movie The Pianist, by Roman Polanski. And the poetry of Victor Hugo. I strongly encourage you to take a look at these cultural masterpieces if you haven’t yet.
That’s al!
(Now you can breathe)

Thank you if you read all that, if not thank you anyway =)

Yes, yes… the French have such profound complex emotions that can only be expressed in the beautiful language… (probably Italian, or maybe Dutch). We English speakers will just have to muddle through with our Shakespeare and Hemingway. ::sigh::

Still, it’s a very evocative piece, and well executed. I especially like your choice of pallet. Well done.

Thanks a lot! And I get your point on the language matter, don’t worry

What I meant is I thought of this tilte in french, and I didn’t know how to translate it so I thought I’d just let it that way …(plus french beats other languages o/ )

). I like the nostalgic mood it expresses.
I couldn’t say exactly why, but I think it indeed fits well with Victor Hugo poetry.

Wonderful picture… It’s rare to have such old and ‘depressed’ style made in Blender. Also the composition and lighting are amazing.

Can I ask how you made the spider webs ?

P.-S. I like the title, you’re going to get a lot of french users reading due to the french

Now that is an image. Cheers mate! Love it.

Thank you! For the spider webs I used subdivided plans on which I put a cloth. Then I reworked the shape a bit, and created a shader with textures I composed from several web images, both abstract and realistic. Alpha mask, some translucency and there you go =)